The ambassador and the Prime Minister stress the role of judges in the Meng case, but experts say extradition is ultimately about political decision-making 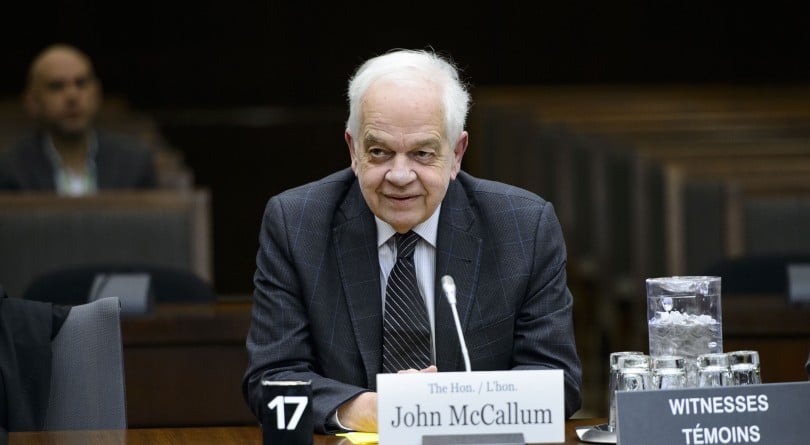 Even after all the coverage of John McCallum’s unorthodox remarks about the strong arguments he says Meng Wanzhou’s lawyers will be able to marshal to stop the Huawei executive from being extradited to the U.S., it’s still worth looking closely at exactly what Canada’s ambassador to China actually said earlier this week when he mused aloud about the sensitive case to Chinese-language media gathered near Toronto.

“One, political involvement by comments from Donald Trump in her case. Two, there’s an extraterritorial aspect to her case. And three, there’s the issue of Iran sanctions, which are involved in her case, and Canada does not sign on to these Iran sanctions,” McCallum said, and then this: “So I think she has some strong arguments that she can make before a judge. And then the judge will decide whether he or she thinks she should be extradited or not.”

The interesting part—beyond the obvious weirdness of a top diplomat publicly sketching the key elements of Meng’s case—is how McCallum stressed that these are arguments to be made “before a judge” and that it will be that judge who “will decide.” His emphasis on the courts was echoed by the Prime Minister when he was later asked about McCallum’s comments. “I think part of the strength of our justice system is people get to mount their own defence and I know she will do that,” Trudeau said. “We will ensure, as a government and as a country, that all the rules and the independence of our justice system is properly defended and properly supported.”

That all sounded right and reassuring. After all, Canadians are used to their politicians deferring to the impartial, non-political courts. But here’s the problem: extradition doesn’t really work that way. It’s not like, say, a criminal case, where politicians must keep their noses out. In fact, the ultimate decision to surrender an individual to another country for trial is not any judge’s to make. That power rests squarely with the federal justice minister.

The process is complicated and can stretch on for years. But, just to touch on the basics, the U.S. authorities asked for Meng’s arrest, which happened on Dec. 1, and then have 60 days to present their case for extradition. After that, the justice department gets 30 days to decide if it will allow the case to proceed. If that “authority to proceed” is granted, then an extradition hearing will be held in the B.C. Supreme Court. If the court decides Meng should be “committed” for extradition, then the justice minister has to decide whether to actually surrender her to the Americans. All this is subject to appeals and judicial review at various points.

READ MORE: The Huawei deal that the Trudeau government missed

But that ultimate decision by the justice minister isn’t some sort of rubber stamp. Nor is it a call that any nameless bureaucrats will make. “This decision cannot be delegated to any officials. [The minister’s] discretion is a broad one, but must not be exercised arbitrarily,” says an explanation of the process on the federal justice department’s website. Seth Weinstein, a Toronto lawyer and specialist in extradition, said the “decision is political in nature,” but must take into account factors like whether surrendering the individual would “shock the conscience of Canadians” or “be unjust or oppressive.”

I asked University of Alberta law professor Joanna Harrington, an expert on international and constitutional law, about all this. “Extradition is far more complicated that people realize, because ultimately it involves a government minister making a decision,” Harrington said. She added: “Court judgments in Canada have often described the judicial role in extradition as ‘a modest one,’ and, as the Ontario Court of Appeal once explained, ‘extradition is a political process in which primary responsibility rests with the executive branch’.”

This doesn’t mean, of course, that the role of the courts in Meng’s case isn’t important. A judge will have to decide if the U.S. case meets the basic standards of the Extradition Act. The Americans will need to show they have enough evidence for her to stand trial in the U.S., and that the offence she’s accused of would be criminal in Canada, too. (Lawyers call that “double criminality.”) Still, experienced lawyers I asked agreed that extradition requests are rarely denied by judges at the committal hearing stage. The more important factor in complicated cases is often the justice minister’s discretionary power.

It is entirely possible that Meng’s lawyers will start making their case to Justice Minister David Lametti even before the court process is completed. In fact, they might already be putting their arguments to him. Officials in Lametti’s department told Maclean’s a person faced with possible extradition “can make submissions any time.” And those submissions would remain confidential, unless they end up—who knows when—as part of a judicial review of the minister’s final decision.

Extradition might look, at this stage in the Meng saga, like a matter for the courts. McCallum and Trudeau might understandably want to emphasize that part of the system. Ultimately, though, extradition is not about neatly separating what judges rule from what politicians decide—no matter how much the politicians forced to grapple with this explosive case might wish it were so.