Stephen Harper asks the GG to read him a bedtime story

And the government will live happily ever after 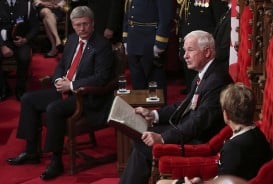 “Tell the Prime Minister you’ve got his back,” encouraged a note from the Conservative party, sent yesterday in advance of the Speech from the Throne.

Moments after the Governor General had concluded reading said speech, another beseeching.

“Tell the Prime Minister you’ve got his back—and help us seize Canada’s moment,” cheered a note.

You’ll forgive the Prime Minister if this makes him seem a bit needy. (For that matter, you’ll forgive the Prime Minister if this makes him sound like Justin Trudeau. “I’ve got your back,” Mr. Trudeau told his supporters in one appeal sent during the Liberal leadership race. “Now I need you to have mine.”) It’s just that this is the way of modern politics. And it’s just that Mr. Harper has had a rather difficult year and, for the last little while, every time he’s turned around to see who’s with him, his side has lost another person. First Patrick Brazeau, then Mike Duffy and Nigel Wright and Pamela Wallin, then Brent Rathgeber and, most recently, Dean Del Mastro.

So maybe the Prime Minister is feeling a bit vulnerable. That would explain why he didn’t want that CTV cameraman following him to New York. And why, after they had the temerity to shout questions in his direction the last time he invited them to listen to him speak, the Prime Minister didn’t want reporters in the room (only camerapeople, presumably of the silent variety) when he addressed his caucus this morning. All but one cameraperson thus refused to cover the Prime Minister’s remarks at all. And that inspired another note from the Conservative party.

“You won’t believe what the Press Gallery just did in Ottawa,” supporters were assured. “Some media decided to boycott an important speech by our Prime Minister – one where he laid out his vision for our country, before today’s Speech from the Throne.”

“Rather than send cameras to cover the Prime Minister’s speech, they attended the NDP’s meeting, and were welcomed with cheers and applause. We knew they wouldn’t give us fair coverage – but this is a new low for the Ottawa media elite.”

It is hard to imagine how the Ottawa media elite could have gotten any lower than whatever their previous low was, but presumably this is why we need to have the Prime Minister’s back. Because the Ottawa media elite insists on being in the room when he delivers a speech. And because Thomas Mulcair and Justin Trudeau would turn this country into an impoverished hellscape run by drug-dealing public servants. Indeed, had they been present, the elites might have heard what Mr. Harper was trying valiantly to protect us from—the “$20 billion carbon tax,” the “reckless economic experiments with people’s livelihoods” and, of course, “legalizing drugs.”

So it was that the Prime Minister, let down by his senate appointees, abandoned by Mr. Rathgeber, undermined by Nigel Wright, hounded by the jackals of the press gallery, struggling against the opposition monsters lurking under the bed and missing a quarter of the popular support he once enjoyed, turned today to the Governor General, hoping to hear that his government was going to live happily ever after.

And so Grandpa Johnston pulled a book off the shelf and proceeded to read a rather long bedtime story.

It was a story of precariousness. Of a moment needing to be seized. Of needing to dare to do so. Of needing to make good on this opportunity. Or needing to understand that this chance that was ours. Provided we could find a way to reduce the number of emails systems that the government currently operates.

That was but one of 147 bullet points that here ensued. It actually drew a chuckle from the crowd of swells swelling the Senate.

Twenty-four of those bullet points were reminders of things the government has already done. Two bullet points involved the Pan Am Games.

There were commitments here to promote exercise, honour police dogs, lower the cost of adoption, improve food labels, stop genetic discrimination, resist the legalization of prostitution, fight the scourge of forced marriage, figure out what happened to the Franklin expedition, allow for the transportation of wine across provincial borders and prevent doctors from treating chronic heroin addicts with anything that you might think weird. The government vowed that it would “not hesitate to uphold the fundamental rights of all Canadians wherever they are threatened,” “continue to defend the seal hunt,” “take further action to improve air quality nationwide,” “continue to promote Canada as a world-class destination for international students” and “continue to create the conditions for new and better jobs for Canadians across all sectors of our economy.”

Having created a structural deficit, the government now proposes to pass a law that would require the government to balance the budget. Except when it needs to run a deficit. Despite screaming about the NDP’s plan to put a price on carbon, the government now says it will “enshrine the polluter-pay system into law.” It will get to those greenhouse gas regulations for the oil-and-gas sector that are twice overdue. It will make the changes to election law that were supposed to have been made more than a year ago. It will do something about the Senate, just as soon as the Supreme Court rules on how to go about doing it. It will remain tough on crime. It will continue to support the troops. It will keep you safe and comfortable and lower your cable bill. And it will complete a free trade deal with Europe. In fact, the Prime Minister is getting on a plane for Brussels tomorrow.