Stephen Harper has some ideas about conservative populism 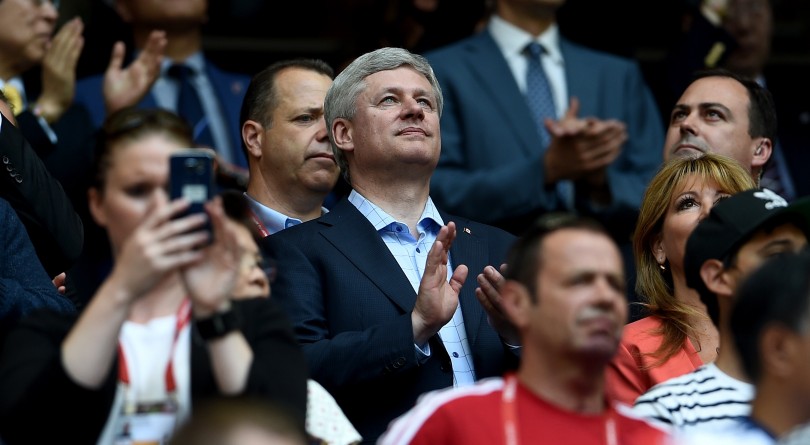 Stephen Harper in the stands before the FIFA Women's World Cup Canada 2015 Final at BC Place Stadium on July 5, 2015 in Vancouver (Photo by Dennis Grombkowski/Getty Images)

The first excerpt from former Conservative prime minister Stephen Harper’s soon-to-be-published book Right Here, Right Now: Politics and Leadership in the Age of Disruption, which appeared this week in the National Post, is built around a supposed clash between “Somewheres” and “Anywheres.” In Harper’s dichotomy, the Somewheres are folks whose deep attachments are to community, church and family. The Anywheres are cosmopolitans whose elite educations mean they can live where they please. For Somewheres, country still matters. For Anywheres, the “global community” is their neighbourhood.

Harper argues that today’s conservative populism deserves a respectful hearing because it harnesses the legitimate anxieties of the Somewheres, who haven’t been doing all that well in the globalized economy. As for the Anywheres, they don’t get it.

This might sound intuitively neat, maybe even like a useful insight. But read a little more closely, and it’s clear Harper misses where the real fault lines run.

For starters, consider his sketch of a typical Anywhere as “someone who works for an international consulting firm or in a globally focused academic career.” Without naming names, I might know a few people like that. Harper says they have “an increasingly weak attachment to the nation-state.” Really? In my experience, they tend to be exactly the type who favour national policy ideas like, say, tax reforms that reduce inequality, public education that promotes opportunity, and regulation that requires corporations to behave responsibly.

In other words, they back the sorts of national initiatives that stand to benefit the Somewheres. So, who is really detached from the nation-state and its interventions? More often than not, it’s the self-avowed conservatives, especially the proudly populist sort, who routinely distrust or vilify government. That includes a lot of rich people who want lower personal taxes, and business owners who want lower corporate taxes. These aren’t Harper’s down-home Somewheres.

Harper presents modern conservatism as rooted in the way Ronald Reagan and Margaret Thatcher “stood against communism abroad and socialism at home.” Fair enough. After Reagan and Thatcher, though, conservative orthodoxy calcified around cutting taxes for the well-off and shrinking public programs designed for the rest, and the populist conservative playbook hasn’t changed that. It’s tough to see how the Somewheres benefit overall.

Then there’s foreign policy. Harper candidly concedes that he backed the Iraq and Afghanistan wars. “Nonetheless,” he writes, “enormous human and financial costs have been incurred through ‘nation-building,’ with very limited success.”  Future president Barack Obama opposed the Iraq war, though, and former Liberal prime minister Jean Chrétien kept Canada out. The Somewheres’ interests, it seems, were best grasped at the time by leaders who weren’t exactly forebears of today’s conservative populism. Makes you think.

Harper stresses how the 2008-09 global financial crisis dominated his own run as prime minister. “By any measure, we left the country in good shape,” he says. How did that happen again? An obvious factor was Canadian bank stability, thanks largely to financial-institutions regulation passed by the Chrétien Liberals in 1996—against opposition from small-government conservatives who envied the deregulated banking bacchanal then in full swing in London and New York.

As for the international scramble to contain the market meltdown, Harper’s government coordinated its stimulus spending with the G7 and G20, working closely with the International Monetary Fund and the World Bank. These institutions are commonly depicted as being in the service of the Anywheres, but didn’t the Somewheres benefit immeasurably? In the worldwide depression that never happened, after all, they would have suffered most.

Harper doesn’t make these connections. Quite the contrary. “The world,” he writes, “simply does not agree on how to balance equality against opportunity, economic security against innovation, health and environmental risks against jobs and growth, or economic outcomes against social and cultural mores, let alone how to choose basic governance models.”

Let’s stipulate that the world hasn’t agreed on answers to these giant questions. But, if by “the world” he means multilateral institutions, they have shown they know something about orchestrating the response to a frightening economic crisis. Or hammering out a climate change accord. Or persuading countries to finally cooperate at least a little on combating grotesque tax evasion.

It’s the overeducated Anywheres, by the way, who do the actual work on these invaluable, albeit imperfect, bids to bring the world together. Those same disparaged cosmopolitans who, when they’re at home, tend to favour governments that can raise enough in taxes to spend reasonably on things like education, health and environmental protection.

The Somewheres have the most to lose when multilateral projects fail, and the most to gain when national programs succeed. So it’s not the Anywheres who would leave them high and dry—it’s the conservative populists shouting that global institutions can’t be trusted and national governments get everything wrong.

By drawing the dividing line between Somewheres and Anywheres, Harper isn’t laying bare a deep societal split that explains conservative populism. He’s buying into a false depiction of opposing camps that populist conservatives themselves strive to perpetuate for their own political advantage.

The real clash isn’t between those who are most at home in, say, the local curling club and others who spend more time in airport departure lounges. It’s between those who see big problems and try to tackle them through governments or multilateral groups, and others who deny that the problems exist while undermining the institutions that might conceivably solve them.

The notion of Somewheres vs Anywheres will get us nowhere.