The Canadian wine industry says the rules are stacked against it, at home and in the U.S. So how did wine become a U.S. NAFTA complaint? 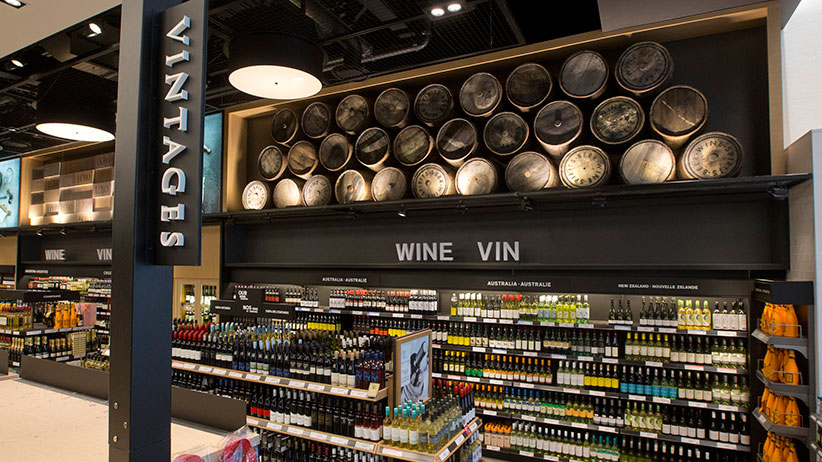 The new LCBO store in Toronto’s Beach neighbourhood. The store has a new “urban” decor (characterized by the use of black as a predominate colour) and a few new features, such as a centre “runway” for the Vintages selections. (Keith Beaty/Toronto Star/Getty Images)

“It’s like wow, what do you want?” wonders Paul Speck, former director of the Canadian Vintners Association. “We think that Americans are doing quite fine, thank you very much.”

While NAFTA negotiators focus on supply management of milk, this other beverage begs attention. Wine producers in America want to sell their wine in Canadian grocery stores, hoping to grow a market share that rose from $6.5 million in 1988 to $504 million last year (equal to every Canadian adult buying a $17 American bottle.) But Canadians face a U.S. system that keeps their southern sales almost negligible. Canada has used wine tariffs to retaliate in past NAFTA negotiations, and Americans now threaten to go to the World Trade Organization if the agreement doesn’t change in their favour. As the wine feud winds up, Americans seem impossible to please, and Canadians feel they’ve gotten corkscrewed.

“It’s a David and Goliath situation,” says Speck. Americans hold 14 per cent of the Canadian market, while Canadians only hold 10 per cent of their own market. In the States, Canadian sales are almost negligible because sellers must go through a three-tier system that originated with post-prohibition paranoia. Vintners like Speck must deal with an importer, which takes about a 35 per cent profit margin, as well as a distributor and retailer, and he requires five different retail licenses across the supposed land of the free. Nevertheless, Americans have arrived in Ottawa arguing NAFTA unfairly benefits Canada. “Explain to me what the problem is,” Speck says.

RELATED: Indigenous rules in NAFTA: Why one chapter is not like the others

Michael Kaiser explains what the problem is. As a vice president of WineAmerica, Kaiser complains that grocery stores in British Columbia and Ontario are not permitted to sell foreign wines, so Canadian brands get exclusive access to the market for inexpensive grocery pick-ups. “It’s a huge advantage because it’s one huge avenue to get it sold that American wine is not allowed to have,” Kaiser says.

Wine tariffs were a weapon in 2015, when Canada retaliated against country of origin rules on pork by increasing duties on American wine (also meat and frozen orange juice). Kaiser hopes for no such vengeance during this round, but he argues the “anti-competition” barrier of grocery store bans “goes against the spirt of NAFTA.”

Spirits and wine are otherwise sold only by provincial liquor boards, so Americans have a “one-stop shop” to make sales, says Dan Paszkowski, president of the Canadian Vintners Association. He says the agreement on liquor is lopsided: “NAFTA to date has been extremely, extremely successful for the American wine industry.”

Winery woes commenced in 1988, when Canada and the U.S. signed their first Free Trade Agreement. Canadian vintners expected the industry to crash, and they lost 30 per cent of the market share. Although vintners survived by increasing exports and turning their vines into tourist attractions, they still face problems even within Canadian legislation.

“It’s frustrating that wine in Canada is treated like a sin, where in every other country on the planet it’s treated like an agricultural product, which it is,” says Speck. Based on a federal law from 1928, wineries cannot sell their products between provinces. “We get treated like the tobacco industry, especially when it comes to taxation,” he says. “Nothing good comes from a cigarette. Wine is a healthy product.”

Tax on wine in Canada rose two per cent in the last federal budget, which Speck thinks would only be fair if applied to all drinks made by producers who grow, crush and bottle fruit: “Why aren’t we paying the same high prices on tomato juice?”

If Canada rethinks its laws, “it will unleash this economic juggernaut that other countries have already figured out,” Speck says. To him, wine is part of Canadian identity, particularly ice wine, which he says gets bestowed to foreigners as much as maple syrup. (Speck prefers ice wine on his pancakes.)

“You may not know this,” says his colleague, Paszkowski, “but there’s more sunshine hours in the Okanagan than there is in California.” Paszkowski says British Columbia’s vineyards resemble no less than Europe’s. The Americans declined to comment on such a claim, but even if California has idyllic grape-growing temperatures, in the opinions of the most passionate Canadian wine backers, it’s the climate north of the border that borders on Bordeaux.