Such stark statements: the ethics commissioner faults the PM

Paul Wells: Another ethics report patiently explains to the PM that he does, in fact, make decisions and they do, in fact, have consequences 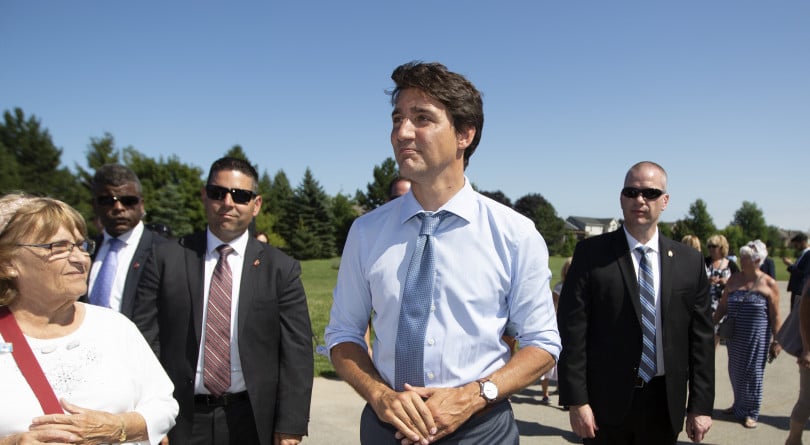 Trudeau visited Niagara-on-the-Lake, Ont. on the same day the Ethics Commissioner released his report on Aug. 14, 2019 (THE CANADIAN PRESS/Peter Power)

When he was the Public Sector Integrity Commissioner, before his current job as Ethics Commissioner, Mario Dion came in for sharp criticism for “procedural delays” in his office. Dion was contrite, saying at the time, “I want to assure federal public servants that we are doing our utmost to make sure this does not happen again.”

Judging from his ruling Wednesday on Justin Trudeau’s behaviour in the SNC-Lavalin affair, Dion meant what he promised.

The timelines are breathtaking. We will get to more consequential matters, but take a look at how fast Dion has learned to move.

RELATED: Why didn’t SNC-Lavalin grab a chance to make its best case?

The NDP writes to Dion on Feb. 7, alleging a breach of Section 7 of the Conflict of Interest Act. He decides there’s been none—but decides on his own that Section 9 might apply, and writes to Trudeau’s office the next day demanding “all relevant documents.” The Prime Minister’s Office moves like molasses, taking seven weeks to deliver the first documents—and five more to deliver a written response from Trudeau. Dion interviews the prime minister the day after he gets Trudeau’s written response. He receives the final “supplemental written submissions” from Trudeau’s lawyers on July 16; he sends a written draft of his factual findings — the bulk of his final report — to the PMO three days later.

This may help explain why, after Trudeau announced on Tuesday of this week that he wouldn’t release a different report from former Liberal attorney general Anne McLellan until after Dion released his own report, Dion took less than a day to do so. The guy’s new motto seems to be “Why wait?”

There will be much speculation about the effect of this report, including the timing of its release, on the outcome of October’s election. I have no clue. You vote how you like.

But it’s a hell of a report. And the Prime Minister’s first response extended the incoherence of everything he has said in public about the mess: how can he “accept” the report while “disagreeing” with it, claiming to acknowledge that he “didn’t do it the right way” while dismissing every specific criticism from Dion? Trudeau is left, once again, bragging about SNC as evidence that he takes seriously “my job as Prime Minister… to stand up for Canadians and defend their interests”—while blandly leaving any decision over a deferred prosecution agreement to the current attorney-general, David Lametti.

Plenty of other writers will be parsing this report line by line. I want to focus on two pairs of successive paragraphs—Dion achieves much of his effect through juxtapositions that reveal hypocrisy—and then to make a couple of general observations.

At paragraph 89, Jody Wilson-Raybould has just told her deputy minister, on Sept. 11, 2018, that she won’t instruct Kathleen Roussel, the Director of Public Prosecutions, to negotiate with SNC for a deferred prosecution agreement. Trudeau staffers Mathieu Bouchard and Elder Marques meet Wilson-Raybould’s chief of staff Jessica Prince to ask, in effect, what the hell. Dion notes that in their testimony to him, both Bouchard and Marques “emphasized” to Prince “that they did not want to cross any lines and that they were well aware of the principle of prosecutorial independence.” Just sharing ideas! Nothing inappropriate! It’s all so polite.

But in the next paragraph, at paragraph 90, Dion notes that “at the same time, the same individuals” in Trudeau’s and Bill Morneau’s offices “were also engaging in discussions with SNC-Lavalin representatives and their legal counsel to assist the company in finding solutions in order to initiate negotiations towards a [deferred prosecution agreement].”

This is rich. The public prosecutor decides whether to prosecute. The attorney general decides whether to cancel such a decision. No AG in Canada has ever reversed a public prosecutor. So at the moment that Bouchard and Marques are assuring Wilson-Raybould’s chief of staff that they’re not crossing lines, they’re huddling with the defendant in a scheduled criminal trial to figure out how to cancel the trial. That’s bold.

Second couplet. Paragraph 189: On Nov. 26, Trudeau meets Frank Iacobucci, the retired Supreme Court justice who’s SNC’s lawyer, on another matter. A briefing note tells the PM that if Iacobucci raises SNC’s trial, the PM had sure better not discuss the matter, no sirree, because it’s before the courts and the public prosecutor has made her decision. Again, this seems like a richly exculpatory moment in an upstanding PM’s career.

But again, keep reading. Paragraph 190: The next day, Trudeau’s men Bouchard and Marques meet another blue-chip SNC lawyer, former University of Toronto president and Torstar CEO Rob Prichard, to swap ideas about how to avoid a trial.

Look, only one of two explanations is possible. Either Bouchard and Marques are rogues sneaking around behind the PM’s back, or they are acting on his behalf as his agents to achieve ends he desires. Dion considers the first possibility at length and rejects it. We have bad news for Justin Trudeau: he really is the Prime Minister of Canada, even for the icky bits.

Reading Dion’s report (Ethics: Endgame) is, in this sense, like reading its prequel, Ethics: Infinity War, written by Mary Dawson and explaining how the PM broke the same conflict-of-interest law when he vacationed chez the Aga Khan. Both public servants find themselves patiently explaining to the Prime Minister that he does, in fact, make decisions and they do, in fact, have consequences.

Standing beside his candidate in Niagara-on-the-Lake on Wednesday, Trudeau said his “job as Prime Minister is to stand up for Canadians and defend their interests.” Speaking to Dion this spring, Trudeau apparently sounded a bit more surprised that when he does things, other things happen as a result. The ethics commissioner asked Trudeau about the December phone conversation between then-Clerk of the Privy Council Michael Wernick and Wilson-Raybould, the one she recorded, upsetting many Liberals. The Prime Minister’s own delicate sensibilities, instead, are shocked by the things Wernick said. Dion writes that the PM claimed not to know “what prompted Mr. Wernick to make ‘such stark statements.'” Dion, who we are learning can be brusque, makes so bold as to suggest it’s because Trudeau told Wernick to make them.

I want to talk about McLellan’s wholly astonishing parallel report, which I read as a substantial vindication of Wilson-Raybould’s work by one of her prominent predecessors, but I guess that will have to wait a day.

For now, just a general impression. Again and again, Dion’s report describes close working collaboration between the most senior officials in the government of Canada and the most senior executives and hirelings of SNC-Lavalin as they all try to figure out, together, what to do about Jody Wilson-Raybould.

I guess I hoped to read about a government working together to figure out what to do about the engineering firm. But the circles in the diagram are drawn differently. From years before she made her decision on whether to become the first Canadian attorney general to countermand a public prosecutor, Jody Wilson-Raybould was the outsider. The insiders all knew who they were.