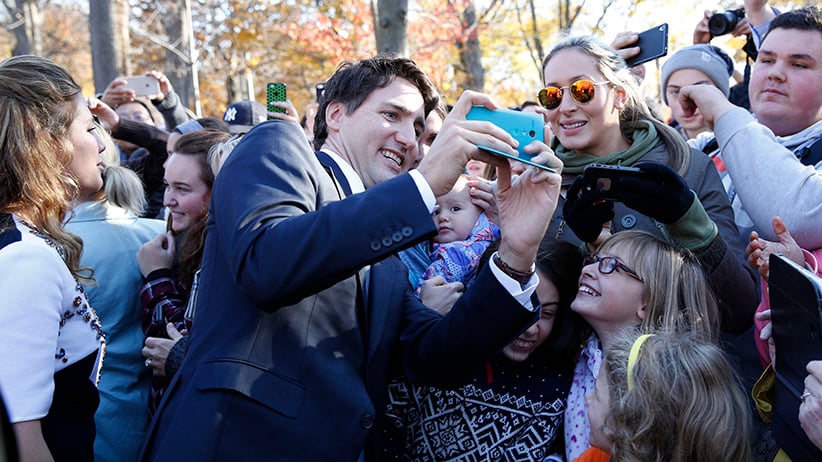 Among the more than 3,000 people who gathered today on the grassy grounds of Rideau Hall, creating a fall-fair atmosphere for the swearing in of Prime Minister Justin Trudeau and his cabinet, few were farther from home than Titus Allooloo.

An Inuit hunter and sergeant in the Canadian Rangers, Allooloo, 62, happened to be in the capital while his adult daughter recuperates from a stroke in an Ottawa hospital. He is from Pond Inlet, Nunavut, on the rugged north coast of Baffin Island, where he first encountered Justin Trudeau as a boy many years ago.

As Allooloo explained, the late prime minister Pierre Elliott Trudeau liked Pond Inlet, and visited regularly in the 1970s, often bringing his sons. “Every so often he would show up with all three kids. There would be no press, just them. They’d land and somebody would take them over to the fishing area,” he said.

Asked if he remembers anything particular about Justin, Allooloo laughed and said, “They were just kids.” Pierre Trudeau made more of an impression: “He was dynamic in public, but in private he was quite shy.” To be on hand as that kid from all those years ago follows in this famous father’s path, Allooloo said, was “just incredible.” Then he swept his eyes over the throng milling around in the late fall sunshine and added: “Everybody seems to be happy, clapping, nobody sad.”

That about captured the scene. Trudeau’s decision to open the grounds to the public turned the usually stuffy oath-taking ceremony into a festive occasion. When he strode up to the Governor General’s imposing residence, with his new, gender-balanced cabinet keeping pace just behind him, the crowd pressed to the ropes lining the long driveway, cheering and shouting congratulations.

If few could match Allooloo’s story, many who came had personal reasons for being there. Firas Arafat, 37, drove up from Toronto. As an immigrant with a Palestinian background, Arafat said the Conservative government’s policy of stripping Canadian citizenship from some dual nationals convicted of serious offences, like terrorism, worried him deeply, making him feel “under attack sometimes” during the election campaign.

“We elected someone who basically campaigned on being more inclusive and not fearing minorities,” Arafat said. He brought his 11-year-old son, Zein O’Hara Arafat, to see that particular kind of history being made. Zein is a little young to have paid close attention to the election, but said, “When my dad had the news on, I found it interesting and pretty cool.”

Not everyone in the crowd was a die-hard Liberal. Dorelle Webster, a retired teacher from Hammond, Ont., about a 30-minute drive from Ottawa, said she also “greatly admired” Tom Mulcair’s NDP, but decided to vote strategically for the Liberals as the best bet to oust the Tories.

Related: Justin Trudeau: ‘We have a lot of work to do’ (Transcript)

Still, Webster is so enthusiastic about the new government that she brought her iPad to Rideau Hall, so she could connect by Skype with her mother, Barbara Webster, 96, in Guelph, Ont., to share some of the upbeat atmosphere as it happened. (Told a Maclean’s reporter wanted to talk with her, Barbara Webster exclaimed, “This is so Canadian!”)

After Trudeau and his cabinet picks passed by, the crowd turned to two big screens, suspended from cranes in a grove of well-tended trees, on which they could watch the one-by-one swearing in of all 30 new cabinet ministers. It was an unlikely scene. Almost brushing one screen was the bronze-leafed branch of a pin oak, planted, the plaque at its base records, by Prince Charles and the late Princess Diana, on a visit in 1983.

The crowd didn’t noticeably thin out during the long, repetitive oath-taking. They applauded all Trudeau’s choices, but had favourites. The announcement of Stéphane Dion as foreign minister, for instance, prompted a loud cheer, perhaps a tribute from Liberals in the crowd to an elder party statesman getting his due. A murmur of surprise rippled now and then, sometimes when a rookie was given a big job, like Vancouver’s Jody Wilson-Raybould being announced as justice minister.

That sensitivity to what each portfolio means was a reminder that many in this Ottawa crowd were politically astute. Present were even a few new Liberal MPs who didn’t make the cabinet cut, and some veteran party operatives. The general high spirits were tinged with apprehension—as Trudeau almost literally stepped across the threshold from campaigning to governing—about the sky-high expectations he must now try to satisfy.

Jennifer Flanagan, 40, lives only a short stroll from Rideau Hall (on the street where Justin Trudeau’s first girlfriend reputedly resided) and spoke with a mix of optimism and realism. “My hope for him and his government is that people give him the space and the trust to have some stumbles,” Flanagan said. “But the changes he’s made already, the fact that half his cabinet are women, to me is remarkable. It’s why I wanted my daughter to see it.”

That was Juliet, 7, who stood at her mother’s side, grinning at nothing in particular, or maybe, given that the sun was shining and adults all seemed unusually cheerful, at everything.