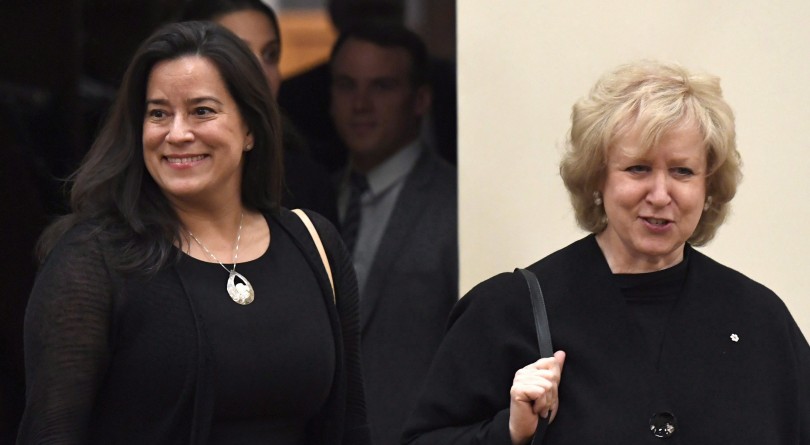 We don’t yet know who leaked details of a disagreement between former attorney general Jody Wilson-Raybould and Prime Minister Justin Trudeau over her pick for a Supreme Court justice in 2017, but we do know who was infuriated by the leaks, and who apparently was not.

When asked directly if anyone in his office leaked details about the confidential discussion around court appointments, yes or no, Trudeau responded with an answer that didn’t rise to the standard of a non-denial denial. More a non-denial non-answer: “Canadians can have confidence in our government’s respect for the institutions, for the Supreme Court.”(CTV News tweet video)

In the service of eliminating inconvenient Liberals the confidentiality that was once central to the federal appointments process has become a necessary victim, writes Paul Wells:

Perhaps the many thousands of Canadians who have applied for federal government appointments under what they thought was a confidential process, introduced by this prime minister, will want to contemplate a class-action suit against him. Because it is now radiantly clear to each of them that their CV is being held hostage by a claque of embattled sorcerers’ apprentices who will cheerfully wheel it over the transom to any waiting scribe if anything about them—their opinions, a fallen political star’s unfortunate decision to argue for their advancement—becomes politically inconvenient. This is the very stuff of the police state.

It was immediately fashionable to wonder on social media how everyone would react if Stephen Harper had done such a thing. It’s germane to note that Stephen Harper never did. Because he had more class. Welcome to the Tet offensive of Charter rights: This was the week it became necessary to destroy the village of good government in order to save it. (Maclean’s)

Two can play at the leak game: Ah, but then on Tuesday night the Globe and Mail reported details of Wilson-Raybould’s plan for Canada’s top court, and how Joyal fit into them. According to the Globe’s sources, Wilson-Raybould saw Joyal as progressive on individual rights and that his move to the Supreme Court would allow the government to appoint Provincial Court Justice Ken Champagne, a Métis, to replace him on the Manitoba Court of Queen’s Bench, making Champagne the first Indigenous chief justice in Canada. (Globe and Mail)

Pass: To absolutely no one’s surprise, the Liberal majority on the House ethics committee shot down an Opposition request that it open its own investigation into the political interference in the SNC-Lavalin criminal case. However Liberal MP Nathaniel Erskine-Smith, who spoke at the committee on behalf of other Liberal members, later told reporters he is potentially in favour of Trudeau lifting restrictions that would allow Wilson-Raybould to talk about the time following her shuffle from Justice to Veterans Affairs. Trudeau only granted her a waiver to speak about her time as attorney general.  “[If] there’s additional information Ms. Wilson-Raybould and Ms. Philpott need to provide, if they’re unable to provide because of the confines of the existing waiver, then yes, I think if we need to get at the truth, there should be a broadening of that waiver.” (CBC News)

A party divided: Erskine-Smith, who had backed an NDP motion in the House calling for a public inquiry into the SNC-Lavalin affair, also published an op-ed Tuesday that said dissidents Liberals should stay in the party—a message that runs counter to the growing drumbeat in the Liberal caucus to eject Wilson-Raybould and Jane Philpott: “If a member of parliament actively intends to undermine our Liberal government and leadership, acts out of personal gain rather than principle, and no longer supports most of the work we have undertaken, then they should no longer sit as a member of our Liberal caucus,” he wrote. “But if a member of parliament is committed to liberal values, and to upholding their obligations honestly, in good faith, and with integrity, then they should be welcomed as members of our Liberal caucus, regardless of any public disagreement. Our party and our democracy are better for it.” (Toronto Star)

Canada’s other oil crisis: Meanwhile, in the alternative universe of news that would normally be dominating headlines and creating headaches for the Trudeau government, China stepped up its assault on Canadian farmers in retaliation for the arrest of Huawei executive Meng Wanzhou on a U.S. warrant last December. With the arrest of two Canadians and a pending death sentence for a third proving unsuccessful in securing her freedom, China banned imports of canola from a second Canadian company,  Viterra Inc. The country targeted another Canadian company, Richardson International, with a canola ban earlier this month. (CBC News)