Syria is gassing children to death. What should Canada do?

The airborne chemical attack in Syria demands a response, writes Evan Solomon. Should this be Canada’s 'red line' in Syria? 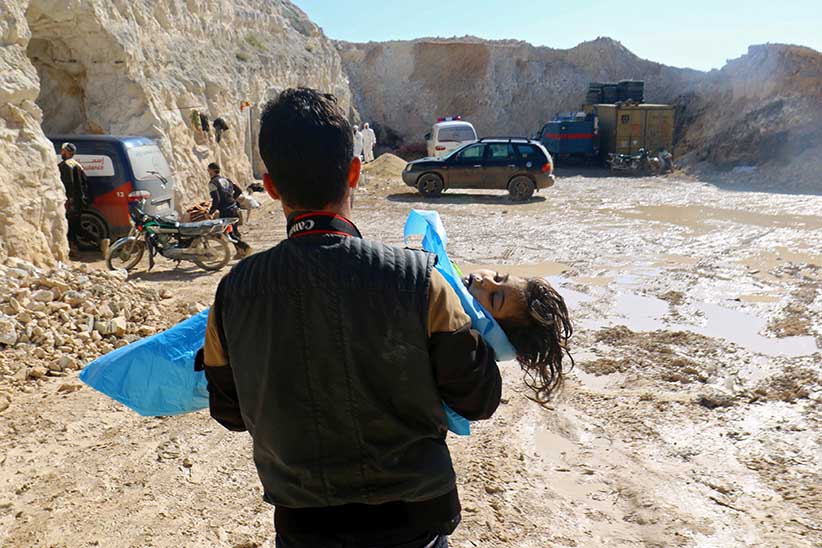 A man carries the body of a dead child, after what rescue workers described as a suspected gas attack in the town of Khan Sheikhoun in rebel-held Idlib, Syria April 4, 2017. (Ammar Abdullah/Reuters)

The perversity is, the usual headlines, as disturbing as they might be, are almost a welcome distraction. There is the priapic pastor, Sen. Don Meredith, accused of having sex with a teenager he mentored, clinging to his Red Chamber appointment with more devotion than he has to his own dignity. Another senator, Lynn Beyak, has disgracefully transmogrified the legalized abuse of Aboriginal children that was the residential school system into some kind of white-washing of the good work done by a few teachers. There are protests over the inexcusable bonuses the family-controlled board of Bombardier awarded themselves after extracting billions from taxpayers while laying off thousands of workers. And next week we’ll all be lost in the haze of the new pot legislation.

Still, all these headlines blur one inescapable fact: children are being gassed to death in Syria.

This is not a sentence we should have to write in 2017. But watch the videos if you can, of children and families choking to death from an airborne chemical attack in Syria. It demands a response. What can we do to stop it? Should this be Canada’s  “red line” in Syria?

It is, admittedly, somewhat naïve to ask this kind of thing. The gassing comes after seven years of carnage, with the Syrian people trapped between Bashar Al-Assad’s institutionalized terror and the cruel death cult that is ISIS. Russia’s depraved leadership continually blocks UN attempts to bring sanctions against their client state. Soft power has failed. Hard power has been muted. Most serious watchers don’t believe this latest episode will change much.  “Assad has killed kids in seven other ways in huge numbers for the past six years or so,” Stephen Saideman a political scientist at Carlton University wrote to me.  “That he did it now in this way has important implications, but whatever ‘Responsibility to Protect’ threshold there is was crossed a long time ago.”

He’s likely right. President Trump initially blamed Obama for the slaughter, and while it was a vulgar slur given the immediate context, Trump was not wrong to point out that Obama’s empty Red Line threat and Syrian policy utterly failed. At least Obama rightly insisted that Assad had no place in any Syrian political future, a position the Trump administration has rolled back. Getting rid of Assad is no longer their priority, and they may even let him stay on as leader in some future government. John McCain had the decency to call this position “disgraceful.” Trump has now hinted that the gassing might spur the U.S. to act unilaterally, but this is likely more empty rhetoric. In 2013, Trump warned Obama not to act in Syria, so he has clearly changed his view for now. But to what, no one can say. Trump has an incoherent foreign policy and is caught up in his own domestic fights. He has not so much drained the Washington swamp, but turned into a kind of Trevi Fountain, a monument of political sludge, so expectations of moral leadership are low. Still, Trump is right on this one: something more must be done.

What about Canada? Despite Conservative criticism, the Trudeau government pulled out the CF-18 jets from the fight in Iraq and Syria. Truthfully, there were very few bombing runs in Syria anyway. Canada now provides refuelling for allied bombers and has expanded training of the Peshmerga in Iraq. Should the images of gassed children force the government to reassess the mission, perhaps even engage in Syria militarily? Around policy circles in Ottawa, this idea elicits eye rolls.

“Your question suggests that Canada has options and influence,” Saideman said. “Not really. Anything Canada does needs to be part of a larger effort. Unless Canada can get other countries to join it and invade Syria, killing Russian troops along the way, I’m not sure [of] what can be done that is anything but symbolic.”

RELATED: What will Donald Trump do about Syria?

Maybe he’s right, but it doesn’t mean Canada is impotent. Between the status quo and an all-out Iraq style invasion—no one advocates that—there are other options. “We must move towards an Afghan-type task set where we are concurrently training and advising, while Special Operations Task Forces are out man-hunting and targeting insurgent command and control and logistical nodes,” Lieutenant Colonel Steve Day, the former commander of Canada’s Specials Operations Forces, told me. “Strategic strike operations are not occurring at a high-enough tempo to keep the adversary off-balance. It’s like we are playing to protect the lead instead of pressing on.”

Syria is a classic “wicked problem,” as Day says, with no easy solutions. Sending Canada’s men and women into harm’s way is the most critical decision a leader will ever make and cannot be done out of a sense of guilt. It must be strategic and thought through. But complexity cannot be an excuse for paralysis. When the gassing of children is not a red line, when it doesn’t force a G7 country to reassess its options, to reset its priorities from the distracting daily headlines, there is no mistaking it: history will judge us badly.