Taking one for Team Trump 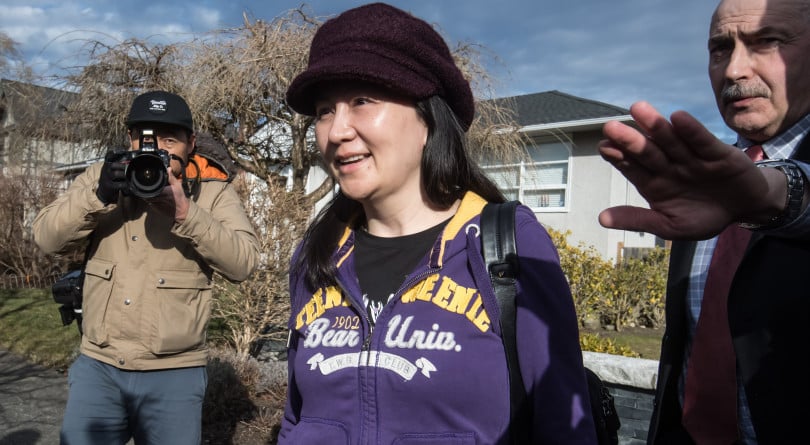 Huawei chief financial officer Meng Wanzhou, centre, who is out on bail and remains under partial house arrest after she was detained Dec. 1 at the behest of American authorities, is accompanied by a private security detail as she leaves her home to attend a court appearance in Vancouver, on Wednesday March 6, 2019. (Darryl Dyck/CP)

Norm! With his legal troubles behind him, Vice-Admiral Mark Norman is ready to return to his old stomping grounds. The question is what should the Canadian military do with him—give him his old job as second-in-command (a position currently filled by someone else) or find another position that doesn’t seem like a demotion (which doesn’t really exist)? The decision about Norman’s future is ultimately up to defence chief Gen. Jonathan Vance, but as one former senior official with the Department of National Defence told Canadian Press, we are in “unprecedented” territory. (Canadian Press)

It worked for him: Borrowing a page from Norman’s legal defence, lawyers for Meng Wanzhou, the Chinese telecom executive detained on a U.S. arrest warrant in Vancouver, said at a hearing Thursday that her arrest was politically motivated and that the federal government is withholding documents important to her defence. The judge hearing the extradition case agreed to delay it until after a separate hearing about document disclosure in September, meaning extradition proceedings might not begin until at least January. (Globe and Mail)

The judge also allowed Meng to move into her second $13-million home. Now she’ll be neighbours with the U.S. consul-general.

Meanwhile, two Canadians remain locked up in China in retaliation for Meng’s arrest, without access to lawyers, family members or sunlight. In a phone call with President Donald Trump on Thursday, Prime Minister Justin Trudeau raised the two men’s cases, however it’s not yet known how Trump responded. (CBC News)

Trudeau’s message was no doubt similar to the one delivered by a delegation of MPs from the international trade committee to members of the U.S. Congress: “So here again, little brother Canada, we’re taking a hit for them big time, right, and that’s not only in our economy with canola, pork and various things, but we have Canadian citizens that are detained illegally and under a bad circumstance.” (Global News)

Double standard?: Dean Del Mastro has a question for Elections Canada—why did he serve one month in prison in 2015 for failing to report a $21,000 contribution he made to his own campaign, when SNC-Lavalin was allowed to avoid prosecution in 2016 for participating in an illegal scheme years earlier in which it reimbursed employees and executives who donated $118,000 to the Liberals. The former Conservative MP was back on the Hill for a press conference Thursday, where he accused Canada’s elections commissioner Yves Cote of holding a “personal vendetta” against him. (Canadian Press)

Legend rising: In the same way Alberta punched above its weight in producing iconic premiers like Peter Lougheed and Ralph Klein, another legend could be in the making with the man who just took power in the province, writes Jen Gerson in the latest print issue of Maclean’s. It’s just not clear if history will regard Premier Jason Kenney as a hero or a villain. (Maclean’s)

NAFTA 2.0 can’t get no love: Unless the USMCA / CUSMA trade deal gets some serious attention fast, it’s doomed, writes Allen Abel in his latest dispatch from Washington:

At her weekly press briefing on Thursday, Speaker Nancy Pelosi enumerated drug prices, maternal mortality and disaster assistance among her most urgent priorities, in addition to her tantalizingly slow walking of Trump’s impeachment, pretending that “it has nothing to do with politics—it has to do with e pluribus unum,” and reminding reporters that “the Nixon experience was months before even the Republicans had to go to the president and say, ‘It’s over.’ ” So New NAFTA is not exactly at the zenith of her to-do list. (Maclean’s)

Booted: Lynn Beyak was suspended from the Senate for the remainder of this parliamentary session for refusing to remove letters posted to her website that have been condemned as racist. Of course she made it about a grandiose free speech fight: “This type of penalty is totalitarian and alien to the tradition of free nations like Canada. Parliamentarians have not had their freedom of expression threatened like this since the events that led to the enactment of the Bill of Rights by the English Parliament on December 16, 1689.” (CBC News)

Unexplained: In true Ottawa fashion no one is saying much about why Supreme Court Justice Clement Gascon vanished for several hours on Wednesday. Police had issued an alert that Gascon was missing, then revealed he’d been found without providing any details. La Presse reported he was in an Ottawa hospital and his family said in a statement he was “in good health.” As for the Supreme Court itself, it won’t discuss his absence, but says it has “full confidence” that the reason for his disappearance won’t affect his work. Last month Gascon said he will step down in September, citing personal and family reasons. (Canadian Press)