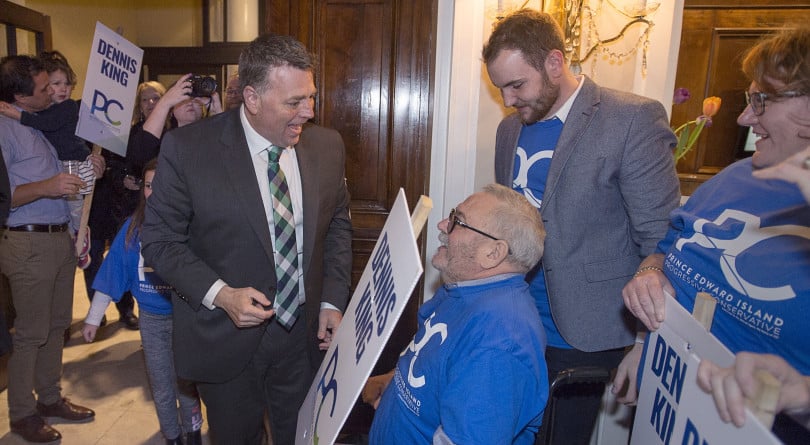 In the end the Green wave many expected would wash over P.E.I. turned out to be blue, marking the fifth-straight provincial election to deliver a right-leaning party to office in just the last year.

The Progressive Conservatives, led by Dennis King, were projected to win a minority on Tuesday night, claiming 12 seats while the Greens won eight to become the official opposition, and the Liberals took six. A party needed 14 seats to cement a majority.  Among the Liberal losses: current Premier Wade MacLauchlan, who failed to retain his own seat. (CBC News)

The Greens may not have gotten the victory they hoped for, but as David Moscrop writes the party’s strong showing could still have a powerful impact beyond P.E.I.:

Prince Edward Island might have made more history on Tuesday night than they know. By electing a Green opposition, the province might have put the party on the register as a viable option for voters who have noticed their achievement, offering a proof-of-concept for other provinces and for the country, allowing the party to say to voters, borrowing from greats James Brown and Van Morrison, “If you’re tired of what you got, try me.” Voters might do just that. (Maclean’s)

Here’s how the votes in P.E.I. broke down by district.

Canada vs. the G7: Intent on not going the way of their provincial brethren, the Trudeau Liberals continue to audition their campaign strategy of contrasting themselves as the party of tolerance against what they say are Andrew Scheer‘s white supremacy-tolerant Conservatives. To that end Federal “insiders” are letting it be known that Canada has butted heads against other G7 nations over the threat white supremacy poses to global security, with a certain orange-hued and unpopular world leader standing against them. The Canadian Press reports Foreign Affairs Minister Chrystia Freeland faced opposition when she sought to get the G7 to issue a statement after the mosque shootings in Christchurch, New Zealand that said white supremacy poses the greatest security threat to the world. The sources wouldn’t say directly which countries opposed the statement, but nevertheless made it clear: “If you were to suggest the U.S. has demonstrated it was at odds, at times, with the G7 or other Western groups, then that wouldn’t be a false assumption.” (Canadian Press)

The anti-immigrant vote: Over the last week headlines and commentary pages have been filled with fears about a surge in anti-immigrant attitudes and bigotry in Canada, but those anxieties are misplaced, writes Terry Glavin. The real problem is that such sentiment has consolidated around one political party:

For the first time since EKOS began its tracking in the 1990s, dyspepsia about the pace of immigration has coalesced with resentments about the rate of non-white newcomers to Canada. And that bloc of public opinion is consolidating for the first time behind a single political party—Andrew Scheer’s Conservatives.

This is happening whether Scheer’s Conservatives want it or not. Whether or not voters with unfavourable and in some cases decidedly unseemly views about Canada’s current immigration policies are being actively drawn to the Conservatives, or are simply being repelled by the annoying, not-racist-like-you histrionics of the Liberals, something unprecedented is happening. (Maclean’s)

Resilience: In his newly-released memoir Love & Courage: My Story of Family, Resilience, and Overcoming the Unexpected, NDP Leader Jagmeet Singh reveals that as a 10-year-old boy he was sexually abused by his taekwondo coach. Speaking on CBC’s The Current, Singh said he “tried to bury it down” for many years but is speaking out now “because I had a platform where I could say a lot of things that might help people out. I hope that in the struggles that I faced, I can help people that are facing similar struggles to feel less alone.”

The flog of war: Canada has had touchy relations with a number of countries in the past few years, but none have taken to declaring war on us. That might change next week. Rodrigo Duterte, the notoriously unhinged president of the Philippines, issued the warning against Canada over dozens of shipping containers filled with Canadian refuse sent there in 2014: “I’ll give a warning to Canada maybe next week that they better pull that thing out or I will set sail. I will declare war against them. I will advise Canada that your garbage is on the way. Prepare a grand reception. Eat it if you want to.” (CBC News)