Paul Wells: The Liberal-Conservative fight over border crossers has produced no clear winner or loser. Expect many rematches. 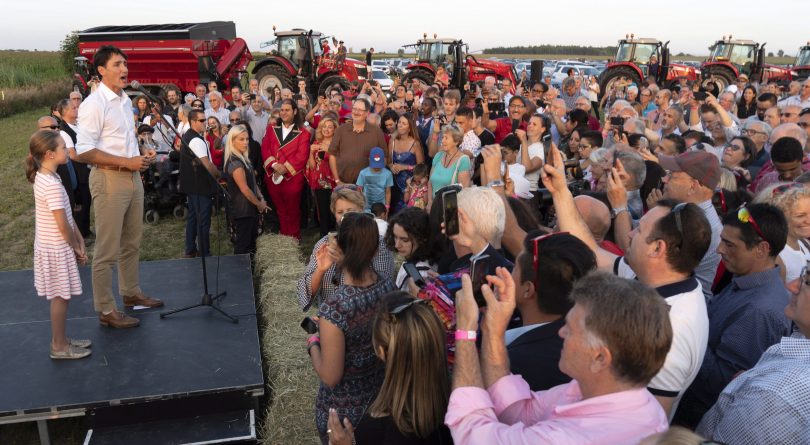 It’s hard to shake the ominous feeling that Justin Trudeau’s shouted Sunday-night exchange with a woman at a corn roast in Sabrevois, Que., was the best foretaste we’ve had so far of the 2019 federal election.

The exchange itself was impressively unedifying, and will be familiar to by now to anyone with a Twitter account. The Prime Minister was cheerleading for his government when a woman in the crowd started shouting at him, demanding to know when he’d return “the $146 million we paid for your illegal immigrants.”

Trudeau replied, “This intolerance with regards to immigrants has no place in Canada.” She asked whether he was intolerant towards “Québécois de souche,” or old-stock Quebecers. He upgraded his dismissal: “Madame, your racism has no place here.”

READ MORE: If Justin Trudeau loses, it will be because of Andrew Scheer’s secret weapon

This led about half the Conservative caucus to accuse the Prime Minister of marginalizing legitimate debate, which may for some have become an uncomfortable position when it became clear that the woman hollering at the PM is, pretty much full-time, a terrible person, with links to Storm Alliance and the Front Patriotique du Québec. (In passing, it’s kind of stunning that the edgiest name anyone can come up with for a group in Quebec is one that cribs from a penny-ante terrorist group a half-century ago. But then, as this handy extremist-tracking website points out, the FPQ’s leadership is “not particularly ambitious.”)

The modified knock on the PM is that he had said things to the woman that would have been unacceptable if she weren’t, in fact, the kind of person he accused her of being. Which loses something in elegance.

This is how you can tell when Liberals are losing. Concerned about illegal border crossers? You’re a racist. Worried about the cost? You’re un-Canadian. Don’t like the carbon tax? You’re a denier. Canadians are sick and tired of this. 3/5

Diane Blain’s shouted questions were, after all, as Scheer’s immigration critic wrote, “the exact questions we have been asking him.” If we skip lightly past the Facebook affiliations of the woman who served on this occasion as the Conservatives’ proxy, we’re left with the questions themselves, or at least with the least stinky of them: Who’s going to pay for resettling the border crossers?

On this, it should be said that the Liberal response hasn’t been entirely coherent. It takes chutzpah to respond that welcoming the border crossers is an expression of high Canadian ideals, even while the feds are conspicuously reluctant to foot a proportionate share of the bill. That’s not even consistent with the Trudeau government’s short history: When Trudeau threw open Canada’s doors to Syrian refugees in 2016 he wasn’t nearly so eager to find another level of government to pick up the tab.

RELATED: Andrew Scheer needs to tell Maxime Bernier: put up, shut up, or get out

Nor is it easy to square the feds’ insistence that there is no border-crossing crisis with the sudden multiplication of ministers with responsibility for the file: To Ahmed Hussen, the immigration minister, add Ralph Goodale at public safety, Bill Blair at whatever Bill Blair’s the minister of, and Dominic LeBlanc at the ad hoc intergovernmental working group on the non-crisis. There’s a “how many Liberals does it take” joke in there somewhere. It’s especially striking when one notes that the PM also likes to double- and triple-team other problem files—there are now more federal ministers with responsibility for international trade than there are lead vocalists in Blue Rodeo—and when one pauses to wonder why more than one minister is needed on any file, since no federal Liberal has been heard to disagree with any other federal Liberal on any question in three years.

In short, Sunday’s corn-roast confrontation and its online aftermath failed to produce a clear and satisfying winner and loser, but there is every likelihood there will be many rematches. Both sides are far too invested in the narrative they pursued this week to stop this fight before it goes many rounds.

Even though he’s reluctant to pick up the tab for his convictions and is now compulsively appointing new ministers to the file every few hours, Trudeau really does believe there can be no legitimate questioning of his policy. The revelation that his interrogator on Sunday was straight from Central Casting will only embolden him in this conviction. And if Scheer had a tweetstorm ready to go, in both official languages, after the corn roast, it’s because he believes he has identified a central weakness of this Liberal government:

This is how you can tell when Liberals are losing. Concerned about illegal border crossers? You’re a racist. Worried about the cost? You’re un-Canadian. Don’t like the carbon tax? You’re a denier. Canadians are sick and tired of this. 3/5

I admit that I too have noticed a quality of moral preening throughout much of this government’s work. It’s perhaps the clearest distinction between the last long era of Liberal power, Jean Chrétien’s, and this one. And I think it betrays a misreading of the 2015 election result.

By 2015, Stephen Harper had stopped trying to govern for all Canadians, including those who might disagree with him, and was governing pretty much full-time for true believers. The turning point came, perhaps, in early 2012 when the Harper government sought to legalize the tax-court harassment of NGOs that dared oppose pipeline construction.

It remains to be seen whether they’ll find any of the alternatives to Trudeau more believably laissez-faire. What’s already a near-certainty is that the Scheer Conservatives and Trudeau Liberals will be unable to resist fighting culture skirmishes instead of sticking with less exciting themes, like program design and responsible fiscal management.