The beasts head East: Atlantic Canada gets its election moment

With a whirlwind tour, Trudeau makes his last pitch. First stop: the Atlantic, where leaders are circling and strategic voting is in play. 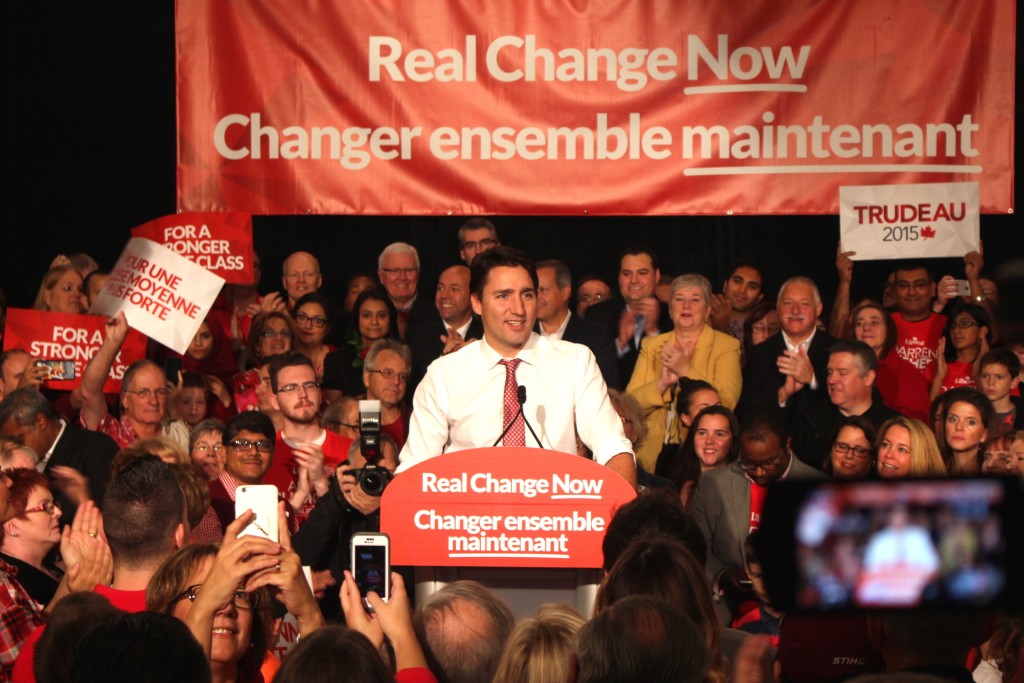 Justin Trudeau speaks at a rally at Halifax’s Westin Hotel on October 17, 2015. (Photograph by Adrian Lee)

The last time a campaigning Liberal leader deigned to visit Halifax for a rally, it was a full 29 days before Michael Ignatieff’s election doomsday. For Justin Trudeau, the number is two. And the hundreds of people who poured into the grand old Westin Hotel here in Halifax were grateful for it.

“It’s really cool that a leader actually pays attention to us. They usually never come out here,” said Kyle MacKay, a 23-year-old from nearby Pictou county. “So to have him come out here now, and three times that I can remember—it feels really nice.”

With the distinguished hotel stuffed to the gills—the lines began two hours before the rally and, at its peak, extended well out the door and to the train station to the south—a hoarse but game Justin Trudeau gave Halifax a taut energy boost. His speech overcame some early turbulence—an older man fainted as soon as Trudeau leaped to the lectern, and his speech was briefly interrupted by climate-change activists—but it was his greatest hits: senior care, families, poverty, taxing the rich, etc.

“We have the chance to take Canada back from Stephen Harper and give it back to Canadians,” he said, urging the partisan crowd to keep knocking on doors and pushing the vote. “We need to keep working to make change happen.”

It was the start of a multi-stop whirlwind tour across Canada for Trudeau, targeting ridings held by his opponents. He left for Saint John, N.B., before plans to jet to Thunder Bay, Ont., Edmonton, and Winnipeg, with stops planned in B.C. on Sunday.

And while starting in Halifax, the economic hub of the bedraggled Atlantic, feels like a logical launchpad for any cross-country tour to prove a leader’s national appeal—the region, too, has been riding a Liberal high ever since Trudeau became leader—this rally felt like more than a symbolic stop. After all, Atlantic Canada has long been considered a foregone electoral conclusion, a have-not footnote that’s neither bellwether nor kingmaker, and also has the poor fortune of voting first. The talking points, then, are always the same, regardless of leader—job creation in a tight job market (unemployment in the region is three percentage points higher than the national rate), rural development (46 per cent of Atlantic Canadians live in rural areas, the most of any geographic region)—and employment insurance. It’s a sad reality made even clearer with recent electoral redistricting: Atlantic Canada, now with a smaller percentage of the House of Commons than any time since Confederation, has been forgotten on the national landscape.

But of late, the sea air has become a salty lure for all three leaders, who have buzzed around the Atlantic in the campaign’s crucial final days, as they look to lock down votes. On Friday, Tom Mulcair, whose NDP made decent gains in the region in 2011, hopped over to Dartmouth, just across the Halifax harbour. On the same day, Stephen Harper dropped by Fredericton as part of efforts to hold onto New Brunswick, which the Conservatives swept in 2011, but where they now appear wobbly. (Indeed, the next day, Harper gave an exclusive interview to the Saint-John Telegraph Journal, taking shots at the leading Libs.) And about two hours’ drive outside of Halifax, where Trudeau waded into the crowd and snapped selfies, former Liberal prime minister Jean Chrétien was rallying the troops in Central Nova, a Tory bastion under the dynastic MacKays for 40 years, which now, with Peter gone, is up for grabs. In fact, with the resignation of three senior Tory MPs from the area, Nova Scotia could look much redder, come Oct. 20.

That’s a lot of attention for a region that’s typically a campaign afterthought. Suddenly, in a tight three-way race where every riding will count, the 32 seats in the Atlantic could matter. For this moment, at least, the region is getting its shine.

So Trudeau spouted sweet location-specific tributes to “right here,” paeans to Halifax “being ready.” And then, lauding his slate of Nova Scotia candidates, there was a shot at the riding’s NDP incumbent Megan Leslie, echoing the criticism of her that has become part of the conversation in recent weeks: “They work hard every day to be your voice in Ottawa, not Ottawa’s voice here in Nova Scotia.” 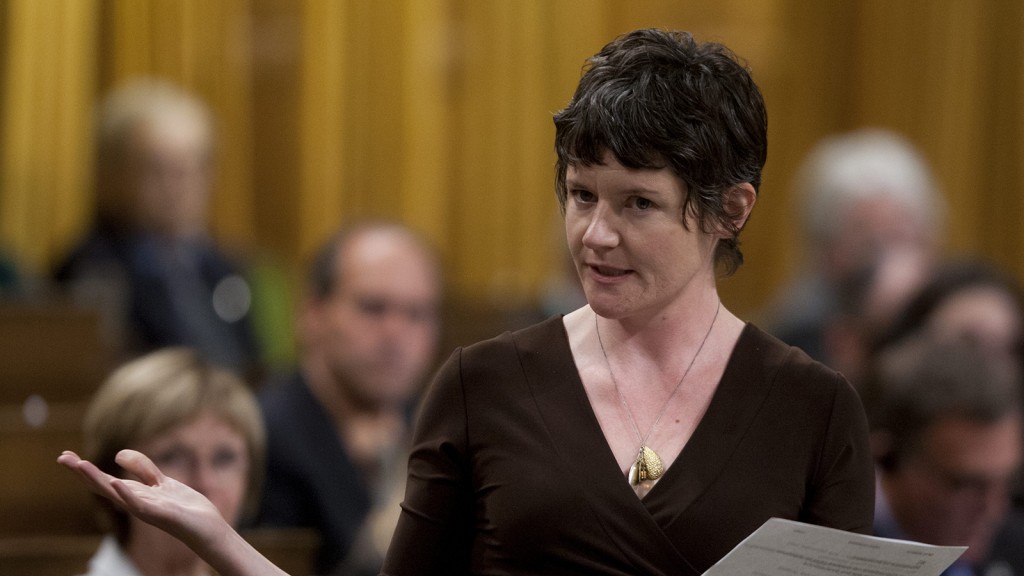 Indeed, Halifax has become a microcosm of a greater national trend. It’s a riding that has been safely NDP for nearly two decades; former leader Alexa McDonough held it until passing it off to Leslie, the locally popular MP who became a deputy leader in 2011. But polling shows that lately, it’s become competitive between the incumbent and the Liberal candidate, Andy Fillmore, a Harvard-educated urban planner who led the venerable downtown’s still-underway revival. Halifax’s trees, ever-resplendent in their autumn, have reflected the new political reality in the city: red and orange in now-even bursts, with nary a blue in sight.

Related: Megan Leslie on the culture of Parliament Hill

For many, that’s a symptom of strategic voting, a concerted effort to kick Harper out by voting for the other man most likely to become PM, a mantle that’s lately settled on Trudeau. A hatred of Harper has permeated the city—a packed local sports bar burst into spontaneous, lusty boos when a Conservative ad showed during a Jays game the night before—so it’s no coincidence that Liberal fortunes began to turn, once polling began to show a consistent lead.

“I don’t like Harper. I’ve never liked Harper,” said Jean Langley, an 80-year-old who has considered voting for the NDP, but will be voting Liberal for the first time in her life. “Justin Trudeau, he’s come a long way.”

“I think that everyone would love to be a part of the winning team and have someone from their town represented on the winning team. People do pay attention to the polls, and they’ve been trending in a positive way, obviously,” said Donald Humphrey, clutching his son in his arms. Middle-aged and fit with a young family, looking as if he had just visited the farmers’ marketdown the road, he’s the kind of voter who used to be Leslie’s bread and butter; indeed, local espresso cafes and pastel-painted student homes—often the NDP’s strongholds—have been showing their support as much for her as for Fillmore.

“I do like Megan, and she’s been a strong voice, but there’s the potential here for people to shift over, because they’re more about ousting Harper than voting for any particular person,” said Humphrey.

Improbably, even Fillmore has nothing but kind words for his popular opponent. “I’ve said from the beginning: I’m not running against Megan Leslie; I’m running for Halifax. There’s work that needs getting done that isn’t getting done,” Fillmore told Maclean’s.

To their credit, the Liberals don’t seem to be banking on those strategic votes. “I’m telling people at the door, ‘Vote strategically if you need to, but here’s what I stand for,’ ” Fillmore said.

“We’re not counting on it. Now, no one’s going to turn away a vote, of course,” he added with a smile. “But we’re earning our votes.”