MUSIC: The Beethoven intervention: Which Beethoven symphonies should you get?

I wrote about Beethoven earlier today — Thursdays are slow around here, and I’m trying to get the election out of my head, and music is always good — and one of the commenters mentioned the boxed set of Karajan conducting the Beethoven symphonies that always comes out around Christmas for $25. And I jumped in to say, Hey, don’t buy the Karajan cheapo Beethoven symphony box, because it’s a snoozer. Which led a couple more commenters to ask me what they should get instead. Here is the answer. Well, two answers:

Here’s all the Beethoven symphony cycles I’ve checked out, in order from my favourite to my least favourite. You’ll notice the Karajan Christmas box is at the bottom. Let’s be serious here: Herbert von Karajan conducting the Berlin Philharmonic in 1963, the year Goldfinger was released, cannot be a bad thing. But the infernal polish of the Karajan Beethoven makes it the least wonderful thing on this list, and everything above it pleased me more. Here we go then: 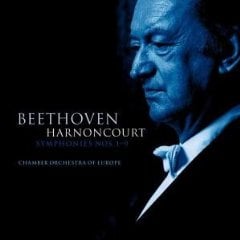 The thing about Beethoven — well, OK, there’s probably more than one, but the thing that just occurred to me — is he came along while Haydn was still working, when orchestras were smallish and instruments were still a little rickety and everything was, you’d have thought, supposed to be genteel. And he got bigger sounds, wilder dynamic variations, odder structures and more passion out of those little court orchestras than anyone was ever supposed to. That’s what these Harnoncourt performances sound like. The band plays modern instruments, except the trumpets, because Harnoncourt likes the raucous blare that emits from a natural trumpet when you blow it with any force. Tempos are brisk — a very post-’90s thing, apparently, although Toscanini used to let ‘er rip in the ’30s too. There are no self-consciously weird interpretive choices, so there’s nothing here that simply doesn’t sound like Beethoven, but it’s all vital, human-scale, bold. This was the Beethoven set that helped me understand why people fuss about Beethoven. 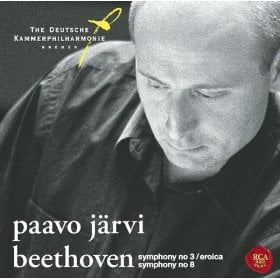 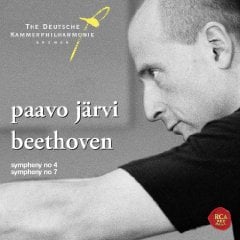 This is in second place mostly because it’s still in progress, with only Symphonies 3, 8, 4 and 7 released in North America; and partly because the interpretations are a little quirky. I think it might be best to listen to something a bit more canonical and then you can hear how outside-the-box these Järvi interpretations are.

What characterizes these versions is the band: small, tight, quicksilver, able to move from a whisper to a roar and (maybe just a bit too) eager to make sure you know it. (Here’s a video about the orchestra.) I saw Järvi conduct in Paris, but he wasn’t conducting these guys and it really wasn’t the same. I’m going to be following this set of Beethoven symphonies as it’s released, because both CDs so far have forced a rethink of the pieces. Accents pop out, tempo changes are defined with a razor blade, and what’s most striking is that there’s only a few players on each instrument, so you can hear Beethoven’s orchestrations with real clarity. To my amateur ears, what Beethoven had that a lot of others didn’t was a real genius for orchestration: when he puts the flutes on top or gives them a secondary role, when he has the horns or the trombones punch out their line while other instruments hold back, it defines the character of a passage. That’s way harder to explain than it is to hear on these tremendously exciting performances. 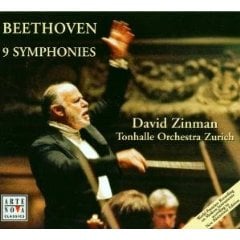 This is the set I was pimping in its iTunes incarnation. Its main selling point is that it’s really cheap, but as a sort of bonus it’s also really good. This is the first recording of the New Barenreiter Edition on modern instruments, but you can file that under “details you don’t need to know” and stick with this: full modern orchestra, brisk tempos, a sleek Cadillac elegance to everything but a lot of horsepower under the hood so nothing gets drowsy. Since the Harnoncourt and Järvi Beethovens will set you back a bit, you should not be at all bashful about tracking down the Zinman. It was a great pleasure to drive across Southern Ontario listening to these performances last Friday. 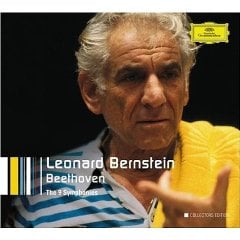 Lenny. Lenny! Actually, this box didn’t do much for me. Vibrant, certainly full of energy, but I didn’t come away with a strong sense of what made each symphony special. The yellow towel on the cover photo rocks, though. 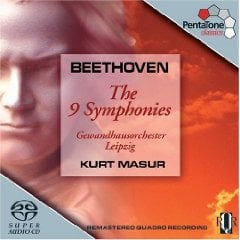 A bit of a sentimental favourite. Masur spent the Cold War behind the Iron Curtain, running a great orchestra with an impeccable pedigree — Schumann and Richard Strauss used to write for it — well away from the Western European spotlight. When it all fell apart in 1989 and violent repression was a daily danger, Leipzigers turned to Masur as a mediator all sides could trust. He was one of the secondary heroes of the Soviet Bloc’s transition to democracy. Of course you can’t hear that in these recordings, but they are fine, brassy, very orthodox but well-executed performances. And it’s just hipper to get the Leipzig versions than it is to do what everyone else does and buy…. 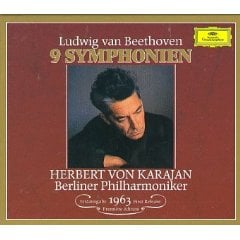