Politics Insider for Oct. 3: Jagmeet Singh had a moment, Justin Trudeau had a mob, and Elizabeth May missed out 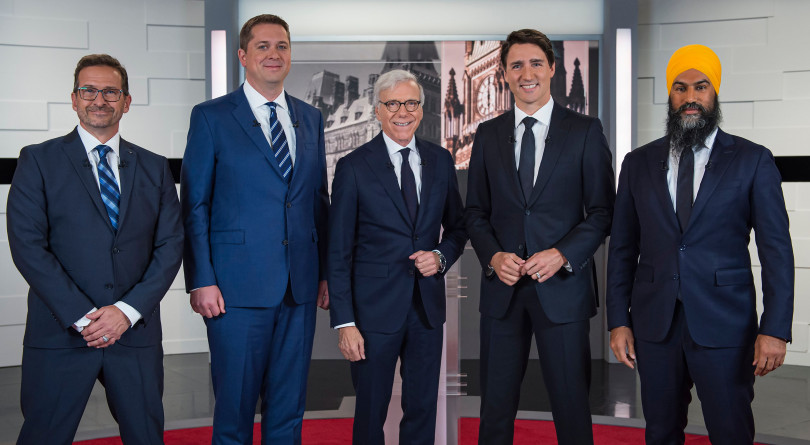 All eyes on Quebec. Last night’s French-language debate saw four party leaders discuss, among other topics, immigration, abortion, illegal border crossings, the opioid crisis, the economy and climate change. The night belonged to the unfamiliar face in the group—at least to those outside Quebec—writes Paul Wells. While Andrew Scheer often found himself on the defensive and Justin Trudeau was calm and low-key, the Bloc leader Yves-François Blanchet was eloquent and professional, but also quick with the shiv:

Scheer tried the deal-closing argument of a man whose party has made gains and could just conceivably win this election, that he needs Quebec support and, besides, what’s the point of electing opposition MPs when you could influence a government? Blanchet saw his opening. “If being an MP who’s not in government is useless, you’ve been useless for four years,” he told Scheer, “and you may be again after Oct. 21.”

Singh had a good night too, showing his sense of humour and better than average French. But will voters take notice of the party that is still stuck in the basement in the polls?

Hard to read. About those Quebec voters… 338Canada’s Philippe J. Fournier looked at the past decade of the province’s politics and notes a history of wild mood swings. In the last three elections, Quebec voters have swung from party to party: 49 seats to the Bloc Québécois in 2008, 59 seats to the NDP in 2011, 40 to the Liberals in 2015. “Some would qualify the Quebec electorate as ‘volatile,’ but others would say ‘dissatisfied,’ ” Fournier writes. “I believe these two epithets are not mutually exclusive.”

Left out. Elizabeth May, longtime leader of the Green party, was not invited to last night’s debate. It was an especially frustrating omission for her after she appeared onstage at the Maclean’s/Citytv debate (notably sans Justin Trudeau). Here, she explains her disappointment with the decision:

The debate on debates has been a perennial nightmare of my life as leader of the Green Party. The world of murky criteria, back-room dealing, collusion between other parties to exclude Greens from debates, have been an anti-democratic scandal from 2008, 2011, and 2015. Unfortunately, I have been excluded from more debates than those which have included my voice. But with the newly formed Debates Commission, I thought that problem would be an issue of the past.

My resigned indignation at being excluded from the French TVA debate is not about me. It’s about giving Canadians a choice—a choice to hear from every leader of Canada’s major political parties. This is the first debate in which the Prime Minister is participating. It is a crucial moment for all Canadians.

In Canada, all parties represented in Parliament should be included in debates. By excluding a Green voice, TVA fails to offer the full picture that voters are facing at the polls this election.

“You should cut your turban off.” Hours before the debate aired on Quebec television last night, Jagmeet Singh was shaking hands in Montreal’s Atwater Market when a man approached him with some unsolicited advice. “You know what?” he said, leaning in to speak quietly. “You should cut your turban off…. You’ll look like a real Canadian.” Singh was unflappable in his response: “Oh, I think Canadians look like all sorts of people. That’s the beauty of Canada.” The moment would have gone unnoticed, had a CBC reporter not been around to capture it on video. The scene strikes at the heart of one of this election’s most uncomfortable realities: none of the major party leaders are bold enough to combat Quebec’s new “secularism bill,” Bill 21, which bans government employees from wearing religious symbols such as kippas, hijabs or turbans. But while Trudeau and Singh have spoken out against it, neither will risk alienating the province’s juicy 78 seats—which means grumbling along while the majority of Quebeckers support the bill.

Hoping for a turnaround. After a rocky start this election cycle, the NDP leader is starting to find his footing on the trail. Shannon Proudfoot spent time with his campaign to learn about their strategy and how the trajectory changed after Trudeau’s brownface scandal.

Every minute of air time or inch of print he spends answering questions about his Sikh faith or garb is a moment he’s not talking about policy or what his party wants voters to know. And all the public appearances in which a few voters at a time come to understand that he’s just like them—or don’t—is time spent filling in a pit someone else dug for him.

Singh is resolutely sanguine and philosophical in the way he discusses all of this—in an interview, he uses the word “frustrating,” but then immediately walks it back—but he acknowledges briefly that sometimes people’s focus on the way he looks interrupts his ability to talk about the issues he cares about.

Sir, you can’t park here. Peter Kent, the Conservative MP for Thornhill since 2008, has written to Toronto’s integrity commissioner requesting an investigation of Justin Trudeau’s appearance at a campaign event in Nathan Phillips Square. According to Toronto’s regulations, no candidate can campaign on city-owned property, which ensures municipal impartiality. This past Sunday, Liberals gathered in the downtown square with signs supporting Trudeau, culminating in a visit by the man himself; he then made a few remarks at a podium and began taking selfies with the crowd. “While Mr. Trudeau’s past actions indicate that he believes there are one set of rules for him, and another set of rules for everyone else, I am confident you agree that all candidates and campaigns should be held to the same standard,” Kent wrote in his letter.

The Liberals, however, are brushing aside the complaint, calling the gathering an “informal meet-and-greet … [that] swelled in numbers and moved organically across the street. The leader dropped by, spent 15 minutes with them and left.”

The missing ingredient. What’s lacking from this year’s election, writes Paul Wells, is… well, inspiration. So many voters are unimpressed with our federal party leaders that an unshakeable sense of resignation and hopelessness has loomed over this past month.

After watching him for four years, I think it’s fair to say Justin Trudeau has not provided very good government. After watching for half the campaign, I also think it’s not realistic to assume Andrew Scheer’s Conservatives would be more thoughtful or imaginative. Or that Jagmeet Singh and Elizabeth May are detail people. Or that Trudeau has learned, and would apply if he were re-elected, any useful lessons from his increasingly laborious slog through his time in office.

Which means this election won’t settle much. It will be interesting to see who wins, in the sense that it’s distracting to watch a long series of coin tosses. But no matter who wins, a better-governed Canada seems unlikely. “You walk into the voting booth and each time you pull the little lever there is implicit in the gesture a tiny leap of faith,” the New York Times columnist Anna Quindlen wrote in her column for the day Bill Clinton was elected in 1992. “And this time some hope as well.” We don’t have levers in Canadian elections, and this year not much hope either.