The biggest divide in Canadian politics? Men vs. Women.

Philippe J. Fournier: If only men voted, the Liberal and Conservatives would be in a statistical tie. Only women: the Liberals win a crushing 226 seats. 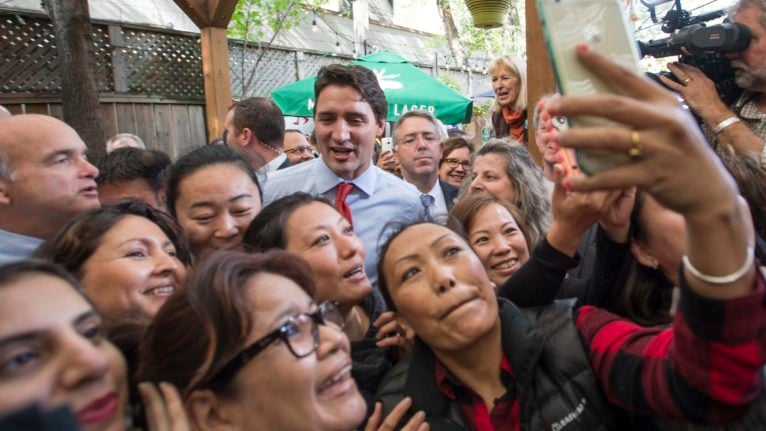 A group of supporters gather around Trudeau during a campaign stop in Toronto on Oct. 13, 2015 (CP/Paul Chiasson)

Although it is not necessarily a new phenomenon in this country, polling numbers of late have revealed a stark divide in voting intentions between male and female Canadians. While I was aware of that fact from past polls, the latest federal figures from EKOS Research Associates published earlier last week caught me a little off guard: Among Canadian men, EKOS currently measures a virtual tie in voting intentions with the Conservatives at 37 per cent and Liberals at 35 per cent nationally. However, among women, Liberal support is double that the CPC, with 47 per cent for the Liberals and only 23 per cent for the Conservatives.

Here are the numbers from EKOS:

While regional or generational differences across the country are often scrutinized in understanding the political landscape in Canada—and justifiably so—I thought I would take a closer look at the gender divide in the current numbers.

I confess I had not paid much attention to the gender voting intentions of late, so I went back and checked other recent federal polls. In Léger’s latest federal survey (June 19-21, 2020), we also observe a statistical tie between the Liberals and Conservatives among men (35 and 34 per cent, respectively), but a crushing 20-point Liberal lead among women:

Regular readers of this column may remember a few of my past politics-fiction exercises such as The Green Democrats and The 2019 federal election with Ranked Ballots. Well, using the last month of federal polling, I performed yet another politics-fiction experiment: What would a federal election look like if voting intentions aligned with the women vote? With the men vote? In our multi-party First-Past-The-Post system, parties that amass votes in the high-30s or low-40s are usually overwhelmingly rewarded in terms of seats, so I was curious to see the results.

What if only Canadian men voted

Using these recent polls and the regional trends of the past federal elections, what if we aligned current voting intentions among Canadian men to the whole country?

Here are the weighted averages for the male vote calculated by the 338Canada model:

[On these graphs, the numbers represent the averages and the coloured bars, the 95 per cent confidence intervals.]

The Liberals and Conservatives would be in a statistical tie with averages of 36 and 35 per cent respectively. The NDP would come a distant third with 14 per cent.

With these hypothetical numbers, the Liberals would be favoured to win a plurality of seats with an average of 159 seats, a deputation similar to the one they gained in October 2019 (157 seats). The Conservatives would be projected modestly higher than their 2019 total with an average of 131 seats. However, as you can see on the graph below, the confidence intervals of both parties overlap significantly, so the actual outcome of an election with such numbers would be highly uncertain:

In this simulation, the CPC gains seat-wise compared to the 2019 election would mostly come at the expense of the NDP, which drops at an average of 18 seats.

Again, these seat totals are not all that surprising considering how similar how they are to the last federal election results. Let us now take a look at the women vote.

What if only Canadian women voted

As stated above, recent polling has shown the federal Liberals well ahead of their rivals in voting intentions among Canadian women. In the past months, we have seen this lead significantly increase over the Conservatives.

Here are the weighted averages calculated by the model:

The Liberals dominate the field with an average of 43 per cent, a 19-point lead over the Conservatives which stand at 24 per cent. The NDP and Greens also fare modestly better with women in the vote projection with 17 and 8 per cent respectively.

How would these voting intentions translate into seats? See below:

Projecting the women vote into seats, the Liberals would win on average a crushing 226 seats—including more than 100 seats in Ontario alone and a complete sweep of the Atlantic Provinces. In fact, the Liberals could even reach the majority threshold of 170 seats before reaching the Manitoba-Ontario border. As for the Conservatives, they would be reduced to just over 60 seats, with half of those from Alberta.

Once again we must insist: This is purely a politics-fiction exercise and these numbers are bound to change over time. Nevertheless, such thought-experiments (Gedankenexperiment) can serve as useful exercises of imagination to better understand the hows and the what-ifs.

Reading from a table that there is a gender gap of roughly 20 points between the main two parties in Canada may not resonate at first, until one compares the stark contrast between the seat projections translated from these numbers.

Yet, it is worth stressing that we have seen similar trends, albeit of lesser amplitude, in voting intentions in Canada: In the 2018 Ontario election, men supported Doug Ford’s PC in much greater numbers than women; The same could be said about the 2018 Quebec election, when the right-of-centre CAQ had higher support from men than women. Ditto Jason Kenney’s UCP in the 2019 Alberta election. South of the border, polls clearly show Democratic candidate Joe Biden leading by comfortable margins among American women, whereas American men are far more divided between Biden and President Trump.

Nonetheless, this represents a major challenge for the Conservatives and the next CPC leader whoever he or she may be. We have discussed at length that polling shows how the Conservatives need to reach out to a younger, more urban (and suburban) demographics in order to win future elections in Canada. But we cannot stress this enough: Trailing the Liberals by almost 20 points among Canadian women also dramatically narrows the path to victory for the CPC.