Pierre Lavallée talks to Paul Wells about the bank's next project, criticisms about past investments and why politicians have no sway at the bank 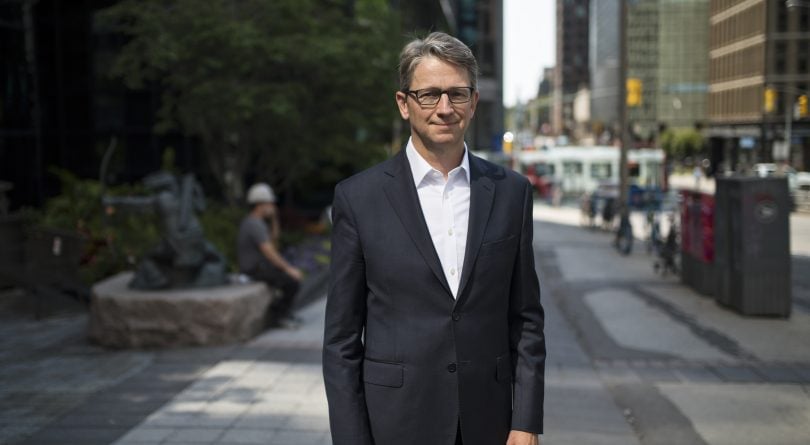 “Things are good,” Pierre Lavallée told me, handing over two sheets of paper. “Actually we have new news that we can share with you. Today we’re making our fifth announcement for an investment.”

The project in question is rather interesting. In Richmond, B.C., south of Vancouver, the Lulu Island Energy Company has gone in big on “district energy,” whereby whole condo blocks or entire neighbourhoods are heated and cooled from a central heat-sink dug into the ground. The technology delivers reliable heating and cooling at low cost to the consumer and, where it’s been introduced, it often permits substantial reductions in carbon emissions. Now the power utility wants to expand its district energy offer to an area over 700 city blocks, 14 times larger than at present.

The Canada Infrastructure Bank (CIB) is offering expertise on the project, the release said. All this “could lead to an investment.” For now it’s tentative.

Then why announce its involvement now? “Word was going to get out that the bank was involved, so we thought, let’s pre-empt any of that,” Lavallée said.

As it happened, making this announcement allowed Lavallée to bring good news at a turbulent time for the CIB, which the Trudeau government established in 2016 with a $35 billion budget allocation to invest in infrastructure projects in ways that would also attract private investors.

Nicholas Hann, the bank’s first head of investments, resigned last week after only 10 months on the job. Hann’s departure supports industry rumours that “there is something radically wrong with CEO Pierre Lavallee’s leadership of the bank,” analyst Sean Keating wrote on the website of Proximo Infra, an infrastructure industry news source. Lavallée is “perceived to have yet to deliver on upping the pace of project development and the broadening of the bank’s mandate into new sectors,” Keating wrote. The Conservatives and NDP are running on a policy of scrapping the Bank, which they regard as a Liberal slush fund. Lavallée’s tenure as CEO past the October election is “uncertain at best,” Keating wrote.

In an interview his office offered Maclean’s, Lavallée insisted the Bank, a novel arm’s-length instrument for encouraging and helping to finance big public infrastructure, is just hitting its stride.

It’s true that the Lulu Island energy project is only the fifth investment—sorry, potential investment—the Bank has announced; only the first outside Ontario or Quebec; and the smallest in dollar value of the five. (The Bank’s first investment, in the REM electric-rail project outside Montreal, has been the most widely noted. At $1.28 billion it is also, along with $2 billion to expand GO regional transit around Toronto, by far the largest. The last two projects on the Bank’s roster, for now, are for amounts under $50 million.)

If the project mix is so far pretty spectacularly Central Canadian, Lavallée said, that will change. What’s been announced so far isn’t necessarily representative, he argued. “I have visibility on the whole 140 projects that we’ve discussed so far in the last year, and the 25 that we’re engaged in detailed due diligence on. And when I look at that group of potential investments, I’m not concerned about concentration, either geographically or by priority sector. I think we have a good mix.”

He was adamant that the CIB is genuinely arm’s-length from the government that created it. The billion and change for Montreal’s REM was announced on the day before Philippe Couillard, then Quebec’s Liberal premier, launched what turned out to be a doomed campaign to get re-elected. Support for his light-rail project could, if he had any chance to win at all, have helped.

“I can see how, from the outside, it looks like it came a little bit out of nowhere and a little bit in a rush,” Lavallée said of the REM announcement. “I gotta tell you, there were months of work that went into that decision. There was extensive due diligence that we performed on the project. And there were several iterations of discussions with our board of directors before they agreed to make the investment.

To suggest “that somebody sent me a memo saying, ‘Sign a cheque for a billion,’ that’s just not how the way this works,” he added. “Had we been ordered and in a rush, it would not have taken as long. And we would not have worked as hard, frankly.”

This was my first meeting with Lavallée. Stepping back from individual controversies, I asked him whether the original rationale for creating the Bank—that Canada is a particularly attractive destination for international investors, and a specialized institution like the Bank could encourage them to do more investing here—has held up.

Yes, he said—although investors sometimes need to be coaxed into thinking about the sort of projects the Bank exists to support. “When (the investor community) think about infrastructure traditionally, it’s meant investing in existing, mature assets that are cash-flow-producing,” he said. “We’re talking about different stuff”—newly-built projects of untested potential as investments that offer returns.

“So I have to get out there and say, ‘If I come up with good greenfield projects—new infrastructure that is revenue-generating, that’s built in the public interest, that we’re trying to attract private investment in—is that something you’d be interested in?’ And I’ve gotta tell you, uniformly, people have said, ‘Absolutely.'”

Why is there interest in such novel projects? Because investors have pretty much saturated the market for more traditional mature assets. “Which means that they all recognize that they need to move a little bit upstream. Newer. Riskier? Fair enough. But if they move upstream and take a little bit more risk in a measured way—and frankly if we’re there to help structure it and give them confidence that the investments will be well-structured—that spells opportunity for them. So there is great interest.”

Lavallée spoke at some length about the characteristics that make a project appealing to him and his colleagues. Does the government ever short-circuit that process, I asked. Does the Bank ever decide a project isn’t worth their support, only to be told by somebody in government that it really should get CIB money?

“You know, the bank was structured as an arms-length crown corporation for a reason. Well, probably for many reasons. But one of those reasons is, to allow us the space to build credibility with the market. Private investors are not going to be interested to come into a project if they think they’re all subject to some last-minute yank of the chain by politicians.”

Easy for him to say. Does the government understand his argument? Lavallée pointed at my phone, with its recording app. “Is your thing still on?”

It was, I assured him.

“OK, well, I’ll say the same thing anyway. When I took on this job, a lot of my friends in the investment community and outside of it, said, ‘Do you really want to subject yourself to that? Do you realize what the risk of politicians coming in between you and good decisions might be?’ I said, ‘Yeah.’ But I’ve had those conversations. And I took on the job because I felt comfortable that that wouldn’t happen. And I’m a year and a little bit in, and I can tell you it hasn’t happened.”