The climate wars will be waged in middle-class living rooms

Politics Insider for Sept. 26: The climate debate pivots to home efficiency, Waseem Ramli is out, and the heating debate around race relations 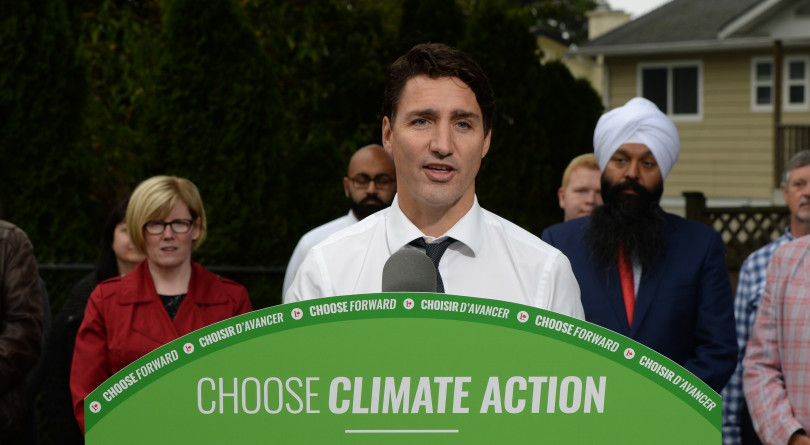 Mirror, mirror, on the wall, who’s the greenest leader of all? In the latest battle to win middle-class Canadian hearts, the Liberals and Conservatives released duelling plans to promote household energy efficiency. The Tories would offer a 20-per-cent income tax credit on energy-saving home renovations that cost up to $20,000, while the Grits proposed a free energy audit and subsequent $40,000 interest-free loan to cover any renovations recommended as a result of the inspection.

The NDP, meanwhile, took aim at both parties for their hypocritical track records on climate change: party leader Jagmeet Singh stood next to colourful briefcases, ossified by spray paint and filled with funny money emblazoned with the headshots of his rivals. Cheap paper signs fired shots at Justin Trudeau’s pipeline purchase and Andrew Scheer’s cozy relationships to the oil and gas industry, but the overall effect made Singh and his cohorts look sillier than they probably intended.

We all know the real greenest leader of all. Green party leader Elizabeth May unveiled her party’s full costed platform. In addition to eliminating student debt and post-secondary tuition (h/t Bernie Sanders), the blockbuster line item was the nearly $27-billion price tag on her first year of proposed pharmacare. “The big ticket item—pharmacare—turns out to be a cost,” she told reporters. “But it’s essential. We have to do it.” Both Trudeau and Singh have also released plans for national pharmacare, though the NDP offered a much lower cost of $10 billion a year, while the Liberals said it would cost $6 billion over the next four years.

Speaking of climate action… CBC News fact-checked Trudeau’s claim that Canada is “on track” to meet its 2030 climate target, and found the statement misleading. The sentence in question: “Canada is on track to reduce our emissions by 30 per cent by 2030 compared to 2005 levels.” In fact, according to figures from Environment and Climate Change Canada, we’re closer to 63 per cent of the way to meeting those goals. Trudeau’s boast appears to be rooted in the hope that future policies and technologies, including a new electric vehicle incentive and planned green energy projects that are set to kick in come 2022, will push us over the goal line. That may be true, but it’s impossible to factor those in right now, simply because they don’t yet exist.

Ramligate comes to a close. After Terry Glavin, in Maclean’s, broke the news about Waseem Ramli, an ardent supporter of Syrian dictator Bashar al-Assad who crept into an “honorary consul” position with the current Liberal government, Foreign Affairs Minister Chrystia Freeland ordered a prompt review to get to the heart of the matter. Just as quickly, she revoked Ramli’s credentials, writing, “The views espoused publicly by Waseem Ramli to the press and on social media are shocking and unacceptable. No one who shares Mr. Ramli’s views should have ever been approved by Global Affairs Canada to serve in this capacity.” One of his more galling opinions is that the White Helmets, an internationally lauded group of upstart first responders in Syria who were granted refugee asylum in Canada, are in fact a “terrorist organization” who “support Al Qaida.”

Off to the races. This election may be best remembered for profoundly horrible candidate vetting. The latest example: an Ontario candidate for the People’s Party of Canada has been called out for writing racist junk on Twitter. In one tweet, Bill Capes, the candidate for the riding of Essex, wrote, “I will be the proud white dude hiding in plain sight in a hijab. Thinking everybody should wear one. Might be good for black flies too?” In another: “Yellow people been working since 5am, black people up at noon. Lol.” When contacted by CBC News, Capes provided a master class in bad PR:

Capes later confirmed the existence of the tweets in a separate interview with CBC News.

“I looked back through my old files and I did the see the tweet,” Capes said. “I understand the context that was there.”

Capes did not provide details regarding the context of the tweets.

Is Facebook worth spending $148,947 on? The federal Liberal campaign managers are hoping the answer is yes, because that’s how much they’ve invested in Facebook ads so far. It’s a greater spend than their Conservative rivals, who spent roughly half that ($73,478) on Facebook ads, and seismically more than the cash-strapped NDP, who spent just $26,328. Stephen Maher analyzed the now-public data from Facebook to understand the competing strategies going on this election cycle. The Liberals are pushing their riding campaign managers to employ a company called Data Sciences Inc., which is owned by Tom Pitfield, an old friend of Justin Trudeau and the 2019 campaign’s digital director.

According to Colin Bennett, a professor who studies how political parties use social media, the Liberals are relying on the same strategy that won them a landslide majority government in 2015, while the Conservatives are opting to reach voters by phone instead. According to Bennett:

There’s a huge battle going on within the digital campaigning world and elsewhere about whether Facebook is really any good, or whether the lookalike audience tools are a bit of snake oil…. There’s close associations, we know, between the Liberals and Facebook, and they’ve obviously been able to convince the Liberals that they can do things on Facebook they couldn’t do otherwise. My sense is the Tories have yet to drink the Kool-aid on that.

The right call. Justin Trudeau, still shaking off last week’s blackface scandal, followed up on a gesture made by Jagmeet Singh to call him and personally apologize over the racist costumes he wore when he was younger. Singh had earlier told reporters than Trudeau was welcome to call him to talk it over, provided the call be kept private. Trudeau did just that, speaking to Singh for about 20 minutes on the phone. Singh later recalled the conversation in brief to reporters:

Mr. Trudeau did call me. We did have a chat. I said that I wanted to keep the conversation private because I didn’t want to be used as a tool in his exoneration. But I also want to make it clear, it doesn’t matter if he tells me anything. I’m not a proxy for the people of Canada…. The people of Canada were hurt, they need to know that he understands. The people in Canada feel like he doesn’t see the struggles they go through, that he ignores those struggles, and his policy decisions ignore those struggles.

Zooming out on the race debate. Ritika Goel, a family physician and family medicine lecturer at the University of Toronto, penned an op-ed in Maclean’s about the real elephant in the room: not Trudeau’s penchant for blackface in the late 1990s and early 2000s, but systemic racism across Canada today.

Let the photos of Justin Trudeau be not a discussion about whether or not he is racist, but rather about what his party—or the others—will do to address systemic racism in Canada.

This means true reconciliation with Indigenous communities. It means addressing issues that disproportionately impact racialized communities such as poverty, lack of affordable housing, tuition and good jobs, to name a few. It means policies that call for better representation of people of colour within our halls of power. It means fair immigration policies that seek to promote pathways to permanent status, ending the double standard for new immigrants, and the cycle of indefinite detention. It means addressing the implicit bias in our justice system and child welfare system. It means ensuring people’s right to openly express their religion.

Let’s examine the record and the platform of each party to see who is willing to commit to true anti-racist policies. And let’s reflect on our own privilege, our personal implicit biases, and the systems we benefit from.