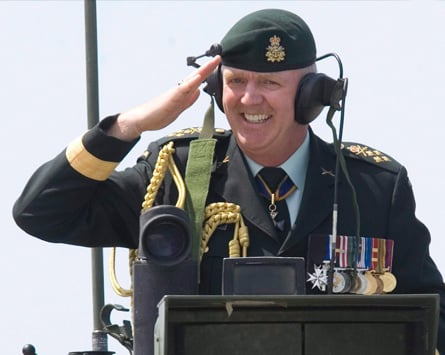 The occasion was a dinner in a hotel ballroom in downtown Ottawa to mark the beginning of a weekend conference of “conservative-oriented” thinkers. General Hillier, formerly the top-ranking soldier in the Canadian military, was preceded to the stage by Preston Manning, former leader of the Reform party. Manning, with remarkably blond hair for a man of 66, was preceded to the stage by Monte Solberg, a former Conservative government minister who has left politics and now has a blog.

In front of the stage were approximately 20 tables with approximately 10 people seated at each. Each table had a brown tablecloth and a vase of red or white flowers. Men, each in a black or navy blue suit, outnumbered women by a factor of three to one. Waiters in black suits, white shirts and black bow ties served roasted butternut squash with green valley apple bisque to start and a main course of slowly roasted rib eye of western beef with fresh herb pan juices, roasted potatoes and seasonal fresh vegetables.

As guests—including half a dozen Conservative MPs and political science professor Tom Flanagan—nibbled at their dessert (a granny smith and caramel tart tatin with vanilla bean ice cream), General Hillier proceeded with his speech.

“Life is good, isn’t it?” he asked. “We live in the best country in the world … You need to stop and remind yourself of that.”

Encouraging his guests to find perspective, he noted that “nobody is shooting at us.”

As he spoke, he clicked through a series of slides. There was a starving child in a foreign country. A child in Afghanistan who had lost his leg. A child receiving a vaccination. Children attending a makeshift school.

He repeated his theme half a dozen times. “Leadership matters,” he said.

He showed a picture of a soldier staring down the rifle of a gun and talked about the “value of people” and the need for “direct communication.”

He then advanced to a picture of a Taliban leader beside the quote “Canadians are good fighters, but their politicians are weak.” He explained that this man pictured, who had apparently said this, was now dead. The crowd cheered.

Hillier then clicked through a series of pictures as examples of leadership. Prime Minister Stephen Harper was a leader, he said, when he visited the troops in Afghanistan. “This is leadership,” he said, as two large screens showed a picture of Mr. Harper in military fatigues greeting a Canadian soldier.

Ontario Premier Dalton McGuinty was a leader, Hillier continued, when he renamed a stretch of highway to commemorate fallen soldiers. The chairman of Tim Horton’s was a leader when he opened a franchise on an army base in Kandahar (Hillier explained how he himself had fought the “bureaucracy” to make this happen). NHL commissioner Gary Bettman was a leader when he sent the Stanley Cup.

Hillier moved then to a series of stories about soldiers overcoming injury and loss, remaining resolute, determined and brave. One had lost both his legs above the knee, but lived to walk and snowboard.

He alternated between self-deprecating quips and thinly veiled references to examples of his own leadership abilities. He dispensed his wisdom. It’s all about people. People want a vision. It’s never as good or as bad as you think. Never waste a crisis. Take your good luck when it happens. You make your own good luck. Sometimes, as a leader, you have to say stop. Challenge the experts. Trust your battle buddies. Perpetual optimism is a force multiplier. Moral courage is often more difficult than physical courage. Be yourself. Humour is good. Sometimes you have to go with the flow.

The audience was attentive. The laughter was frequent. Hillier—a man who seems to idolize both Douglas MacArthur and Bob Hope—seemed happy to be where he was.

Departing the stage he declared himself a Canadian and clicked to a final slide—a man in orange jacket and toque, sitting on two cases of beer by the side of the highway, beneath a sign indicating a deer crossing, holding a gun.