The Commons: Lawrence Cannon explains everything 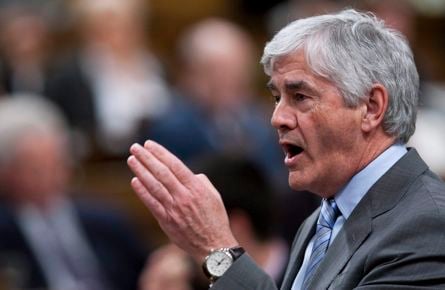 The Scene. This is surely not the worst of times, but it is perhaps nearly the dumbest. For sure, this is a time of witless woe.

We have no doubt been sliding for some time, but when we got to Guergis we should have realized we had taken a wrong turn, crossed some threshold. Now here we are, stuck in this place with this fake lake and a phoney merger and a theoretical coalition. The threats are only ever exaggerated, the questions are facetious, the crises are manufactured. There is flailing and wailing, faux outrage and bad acting, adult human beings reduced to live-action press releases or made to demonstrate like the characters of professional wrestling. Hearsay leads the news. Bad jokes carry the day. Everyone claims patriotism. Everyone is accused of treason. All seemingly see intellectual dishonesty as the path to power. Few looking on seem to find anything here to believe in.

And so here today was a spectacle for this era, the Foreign Affairs Minister rising in the House of Commons to explain at length the government’s choice of wallpaper.

At first there were only questions about how the government had come to spend nearly $1-billion to secure the meetings of the G8 and G20 later this month. But for several days now, the government has also been asked to explain the various trinkets and novelties—the rural gazebo, the rustic toilets, the indoor waterway, the mock stock exchange, the superfluous media centre—involved in its staging of these summits. Perhaps here the Prime Minister is merely reaping what he has so carefully sown. He who campaigns in a bubble and governs via infomercial, now made to explain the rather trivial amount of money necessary to build a fake lake in downtown Toronto, not more than a ten-minute walk from a large, naturally occurring body of water.

Today’s questions had to do with the aforementioned wallpaper. Or, more precisely, the posters, coverings, signs and backdrops that will decorate the walls of the summit at a cost of just over $1-million—a controversy that has precipitated no less than the release of artist renderings.

“The fake lake was apparently not enough for their photo ops,” Mad Mark Holland, the perpetually fuming Liberal, groused. “We have now learned the government is blowing $1.1 million on fake backdrops. I guess if the fake lake is too far away or the $23 million empty media centre is not available, they need $1 million for wallpaper. After Conservatives have run up the biggest deficit in Canadian history, have they completely forgotten that this is the public’s money?”

Lawrence Cannon stood to respond for the government side. “Mr. Speaker,” he said, “I welcome the opportunity to set the record straight.”

Mr. Cannon presently occupies the post of Foreign Affairs Minister, perhaps one of the more prestigious posts in cabinet. For most of the first half of the last century, it was a position occupied by the Prime Minister. When it was delegated in 1946, it was assigned first to a future prime minister (Louis St. Laurent) and then a Nobel Prize winner (Lester B. Pearson, a future prime minister himself). It has since often been the domain of some of this nation’s most celebrated public office holders.

Shortly after the fall of Maxime Bernier, it became Mr. Cannon’s job. Mr. Cannon is, by official order, the minister who would fulfill the duties of prime minister were Mr. Harper to be suddenly incapacitated. His American counterpart, for the sake of comparison, is no less than Hillary Clinton.

With all this in mind, behold the words that Mr. Cannon stood this afternoon and emphatically read into the record.

“The costs quoted covered signage and backdrops for four international events, the G8, the G20, the B20 and the youth summit,” he reported.

Mr. Cannon had already assured his place in history two days ago with his invocation before the House that “building costs for the water feature are $57,000.” Here now he strained to surpass that poetry.

“In total the backdrops will be used at seven summit venues, three hotels and over 30 rooms,” Mr. Cannon continued, speaking assuredly over the noise.

Then even more specificity.

“Costs include production, installation and take-down of 130 signage items,” the Minister proclaimed, “ranging in size from one piece over 100 feet long to pop-up banners that are two by six and include stands, plus 150 nameplates.”

Sensing that his time was just up, he looked up to the Speaker.

“I have not finished,” he declared with some conviction. “International summits—”

Alas, here he was in fact finished, the Speaker compelled to cut off his microphone with the expiration of his allotted time.

“Unfortunately,” the Speaker lamented, “the time has expired.”

Unfortunate indeed. This was the closest this place has come to hearing a factual explanation in months. But with the precise number and size specifications of the signage items do we now move forward as a nation, as a people, as a testament to humanity.

The Stats. The G20, 16 questions. Firearms and the oil industry, three questions each. Securities regulation, copyright, veterans, the military, Parliament, Rights & Democracy, two questions each. Immigration, the arts, aboriginal affairs and science, one question each.