The Commons: Supporting the troops

Veterans ombudsman lashes out at 'the system' 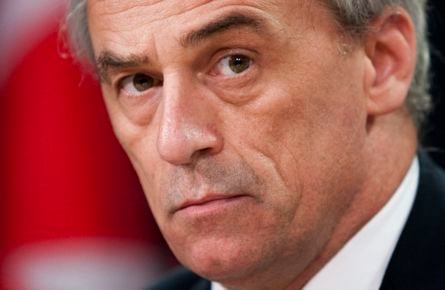 Colonel Pat Stogran sat in a suit and tie at the front of the National Press Gallery, somewhat hunched over his notes, his hands placed on the table in front of him. Every so often, as he read in precisely the sort of impatient, unapologetic, grinding tone one would expect from a colonel, he would glance up from beneath an impressive brow.

To his immediate left sat a man in a wheelchair, a former member of the Canadian Forces now suffering from ALS. To Col. Stogran’s far right and far left sat men with medals pinned just below the right shoulders of their suit jackets. A half dozen other veterans sat in the gallery.

Col. Stogran explained first what he was not here to talk about—the government’s decision not to renew his term as veterans ombudsman. He has held the title since November 2007 and he will relinquish his post in three months.

“What I am here to do,” he said, “is to expose to Canadians what I perceive as a system that for a long time has denied veterans not just what they deserve, but what they earned with their blood and sacrifice.”

If he is to leave his post, he seems intent on doing so unquietly. Indeed, deviating from his initial statement, he speculated that perhaps he had surprised the government that appointed him. That he had been too outspoken, too aggressive. If so, he seemed unrepentant, perhaps even emboldened.

“It is beyond my comprehension how the system could knowingly deny so many of our veterans the services and benefits that the people and the government of Canada recognized a long, long time ago as being their obligation to provide.”

This was merely the preamble.

Col. Stogran pledged here and now to spend the last three months of his term explaining to Canadians “how badly” veterans and their families are being treated. Then, looking up, he raised his voice and lifted his right hand to chop it at the audience. “To all Canadians, these are your sons and your daughters,” he said. “They’re your brothers and sisters. The time is now to do something about it. Make sure this government understands that this must stop.”

He ceded the microphone then to the men at his sides, each of whom testified to some failure or another of the system—tales of bureaucracy, claims of injustice. The tone was at turns angry and frustrated and demanding and pleading and discomfiting. All of it ultimately coming back, implicitly or explicitly, to the three words that have so often been mouthed these last ten years: support the troops.

The term is by now nearly cliche, tossed off reflexively and lightly like a “god bless” after a sneeze. The Canadian soldier is regularly invoked here to proclaim one’s patriotism, defame one’s opponent, avoid uncomfortable questions, and defend debatable actions. But even if the three-word phrase already seems rendered meaningless by abuse, here it was directly challenged. Here the comforting platitude was met with uncomfortable claims.

When it was his turn, the man to Col. Stogran’s left apologized for his laboured speech, the ALS he suffers from—attributable, he says, to inoculations he received while serving in the first Gulf War—apparently makes it hard to breathe and speak at the same time. “My advice to the ministry is if you’re not willing to stand behind the troops, feel free to stand in front of them,” he said.

And even if this too was a cliche, here it seemed crushing.

Few escaped blame for the neglect, for the care not received and the toll untended. The press was beseeched to ask questions, the public was begged to pay attention, the bureaucrats were blamed, the politicians were told to honour their words. The failure was depicted as massive. “The system” was invoked and lamented again and again and again. The stories were myriad and complicated and the discussion often unwieldy. The point seemed to be this: whatever we say as a country that we feel for our soldiers, we do not demonstrate it when most required.

“We line that Highway of Heroes to respect those who have fallen,” said the man to Col. Stogran’s far right. “Let’s start lining that highway for the veterans that come back that are sitting up.”

“If you detect a bit of frustration up here,” Col. Stogran said. “Welcome to my world.”

Indeed, now the colonel vented too, no longer hunched and steady, but sitting upright and lecturing.

“I could go on for hours,” he said when he finally neared a conclusion.

Reporters’ questions were met with only more lamentations. Eventually, someone asked the colonel if he was disappointed in particular with the Prime Minister. Here, Col. Stogran directed reporters to a Canadian Alliance flyer included in the package of documents handed out before the news conference, which featured, he said, a picture of him in the lower left hand corner. Atop the flyer, beside a picture of Stephen Harper, are two sentences. “When we need you, you are always there. Now it’s our turn to defend you.”

Col. Stogran spoke of himself as “window-dressing” and then proceeded once more to lament for the bureaucracy and the workings of government.

Specific questions need be asked, and specific answers given, about that system. But the fight now would seem to be one of words versus deeds, easy slogans versus uncomfortable realities and the very real business of running a country.