If politics is like hockey, then how come Ken Dryden is so woefully out of place? 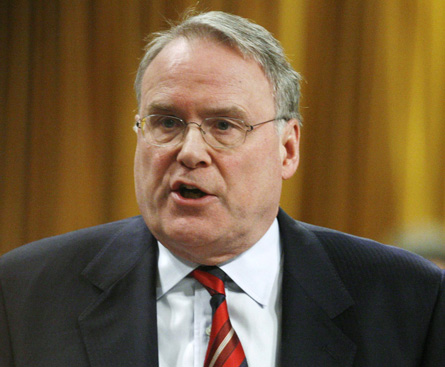 The Scene. Bob Rae was lingering near the microphones after Question Period, taking questions on Ruby Dhalla’s nanny troubles, when he decided to venture an analogy

“I’ve said many times that politics is more like hockey than it’s like ballet,” he mused. “If you perceive a weakness, then it’s no surprise to anyone that people would try to take partisan advantage of that.”

The government side has taken a few opportunities these past two days to raise the matter of Ruby Dhalla in the House. On each occasion, a backbencher was sent up solemn-faced and seemingly on the verge of tears to read into the record details of the various allegations and ask that a minister rise to explain in further detail how precisely abhorrent the whole thing is. Today, both Helena Guergis, minister of state for the status of women, and Jason Kenney, the immigration minister, were given the chance and carried out their duties with obvious concern.

“Having been at this business for nearly 30 years, I’m not surprised by anything that I’ve seen or heard in the House of Commons the last couple of days,” Rae continued. “I think the point has to be made though that we don’t do public show trials in Canada and we don’t try and hang people on the floor of the House of Commons.”

Indeed, Canada did away with public hanging shortly after it became a country. Thus, we were left with hockey and politics to satisfy our need of bloody spectacle. And so Question Period still serves some purpose.

In keeping with recent habit, Michael Ignatieff led the day with a request that the government make quick amendments to the employment insurance system.

“Mr. Speaker, I think it is very telling that in the run-up to the preparation for this year’s budget we asked the Liberal Party and the Liberal leader for their ideas on what should be done to help Canadians who are going through layoffs in these challenging times,” huffed Diane Finley, the human resources minister, in response. “We received nothing in response, nothing from the Liberals. The very first day after his coronation officially as leader of the Liberal Party what has the new leader come forward with? An idea borrowed or stolen from the NDP.”

“Mr. Speaker, the members on the opposite side of the House seem to want us to do their job,” snapped a scowling Ignatieff. “We are asking them to do their job.”

The Liberal leader repeated his question. The minister moved on to her next point.

“Let us face it, Mr. Speaker, the last time action was taken on this file, prior to us improving it, was when the Liberals introduced the program in 1996 and they gutted it,” she reported. “They gutted it say all acknowledged sources.”

It is by the same logic, of course, that the Liberals plan to fight the next election on Conservative involvement in the conscription crisis of 1917.

“Mr. Speaker, a 360-hour national standard of eligibility will help Canadian families who have lost their jobs. It will provide immediate stimulus to the economy,” Ignatieff offered with his third and final attempt. “So the question is this. When the Minister of Finance said just last night that he was willing to consider our proposals on EI, was this for real or was it just a case of when the cat is away the mice will play?”

This was, apparently, a nursery rhyme reference to the Prime Minister’s being away on travel. A voice from the Liberal side called out, “meow.” Rising again, Finley repeated her first point. Then it was Denis Coderre’s turn to bellow, which was the cue for Finley to read into the record various quotes of various Liberals offering unrelated praise for the government’s budget.

“Oh!” the government benches sang each time the minister revealed which Liberal had apparently said what.

The proceedings eventually came round to Jack Layton. Typically frustrated, he similarly beseeched the government to refigure the formula for employment insurance. Turning to another of her talking points, Finley shamed the NDP side, suggesting that its refusal to vote for the government’s budget was an insult to the unemployed.

Eventually, the Speaker called on Ken Dryden, the old goalie standing tall to wax poetic as only he possesses the self-seriousness to do so.

“Mr. Speaker, in a recession it is harder to keep a job; it takes longer to get one,” he began. “In a recession, Woodstock, Ontario is no better off than Bridgewater, Nova Scotia or Red Deer, Alberta. Recession is an equal opportunity unemployer. When will the minister create a national 360 standard?”

The minister offered neither a yes nor a no. “While we are increasing benefits and increasing access for the unemployed,” she lamented instead, “all the Liberals want to do is increase rhetoric and taxes.”

That last bit—about taxes—has become a popular refrain for the government side. Questions today about funding for scientific research, the accountability of the transport minister, the availability of credit for the purchase of automobiles and the safety of Canadian pork products were all answered with some reference to what the Liberals might or might not do to federal tax policy should they ever again win the right to form the government. Yesterday, it was an NDP question about the scrutiny of government appointments that prompted Pierre Poilievre to stand and express deep worry about the Liberal leader. On days previous it was government backbenchers—Jeff Watson, Candice Hoeppner, Daryl Kramp and Bob Dechert all with apparently nothing else better to do on behalf of their constituents—sent up solemn-faced and seemingly on the verge of tears to ask Poilievre about the menace of Michael Ignatieff.

Ken Dryden, lacking much patience for this stuff, snapped at Finley.

“Ohhhh!” mocked the government side.

“It is not what the government does, it is what the dimensions of the problem require it to do,” Dryden continued, desperately serious as he generally is. “Over 400,000 more Canadians unemployed. The government is stuck with its own bad lines, ‘we’re doing this, doing that.’ It is not about what it finds convenient to do, it is what needs to be done. As distasteful as the Prime Minister finds government action, as distasteful as he finds EI, it is not about him. It is about all Canadians. When will the government create a national 360 standard?”

“You missed on the poke check, Kenny,” cackled a voice from the Conservative side.

For sure it is ironic that Parliament’s only actual hockey player seems so woefully out of place in this game.