The Commons: The House always wins 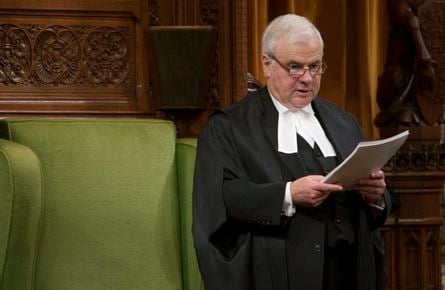 The Scene. “In his March 31 intervention, the Minister of Justice quoted from the 1887 parliamentary treatise of Alpheus Todd,” the Speaker said. “The Minister also cited Bourinot in 1884.”

This was, by these standards, riveting stuff.

“Had he read a little further,” Peter Milliken continued, “he might have found the following statement by Bourinot at page 281. ‘But it must be remembered that under all circumstances it is for the House to consider whether the reasons given for refusing the information are sufficient. The right of Parliament to obtain every possible information on public questions is undoubted, and the circumstances must be exceptional, and the reasons very cogent, when it cannot be at once laid before the houses.'”

From his seat, the Justice Minister chuckled at this reprimand. He may have by then—with a full 15 double-spaced pages left to be read—realized that the government’s case was lost.

History arrived with neither pomp, nor circumstance, nor even grace. In the 45 minutes preceding his ruling, Mr. Milliken presided over a session of Question Period that totalled 41 questions and perhaps three or four answers. There were the usual amounts of hooting and hollering and carrying on, including a wild bit of flailing and pointing and yelling from Jim Abbott on the subject of improving the health situation of mothers in the developing world.

Eventually the Speaker announced an end to the time allotted for oral questions. Some MPs took their leave, many remained, anticipating what was to follow. At precisely 3:04pm, Mr. Milliken stood in his long black robes and announced the following.

And with those 54 words committed to the record, Mr. Milliken proceeded with the other 6,400 typed out over 38 pages now held in his hands.

He began with a simple enough review of the facts. Michael Ignatieff sat and listened with his hand over his mouth. Bob Rae reclined and listened. Defence Minister Peter MacKay appeared to be concentrating hard. Justice Minister Rob Nicholson sat turned away from the Speaker’s general direction.

“It is no exaggeration to say that it is a rare event for the Speaker to be seized of a matter as complex and as heavy with consequence as the matter before us now,” Mr. Milliken observed.

To state it simply, be that possible, the matter before us had only to do with the power and precedence of the House of Commons, the primary legislative body of our democracy, filled, as it is, with our duly elected representatives. A majority of members of the House have demanded that the government produce, wholly and unredacted, various documents related to the country’s handling of detainees seized in the process of conducting our mission in Afghanistan. The government has so far refused on a claim of national security authority and responsibility.

It is, of course, not even that simple—complicated by doubt, accusation, inconsistency and war—but ultimately there is this question of power.

There seemed, at first, points for each side. Halfway through, the tally might have been said to be tied. Then, the will of Parliament began to run up the score.

“Before us are issues that question the very foundations upon which our parliamentary system is built,” Mr. Milliken observed. “In a system of responsible government, the fundamental right of the House of Commons to hold the government to account for its actions is an indisputable privilege and, in fact, obligation.”

Then came the reference to Bourinot. Then references to Maingot, Erksine, McGee and Odgers. Then this.

“It is the view of the chair,” Mr. Milliken said, “that accepting an unconditional authority of the executive to censor the information provided to Parliament would in fact jeopardize the very separation of powers that is purported to lie at the heart of our parliamentary system and the independence of its constituent parts.”

MPs on the opposition side applauded. The Speaker continued. “Therefore,” he said, “the chair must conclude that it is perfectly within the existing privileges of the House to order production of the documents in question.”

A cry of “yes!” came from the far end of the room.

The verdict now seemed assured, but the Speaker kept on, now venturing an attempt at peace. “It seems to me,” he said, “that the issue before us is this: is it possible to put into place a mechanism by which these documents could be made available to the House without compromising the security and confidentiality of the information they contain?”

He asked for “common ground” and “trust” and “collaboration” and “accommodation.” He offered all parties two weeks to sort out a solution to this last question. He offered his services and announced himself open to suggestion. But there, in the fourth last paragraph, was the ruling.

“Accordingly,” Mr. Milliken said, “on analysing the evidence before it and the precedents, the chair cannot but conclude that the government’s failure to comply with the order of December 10, 2009 constitutes prima facie a question of privilege.”

There it was. In its own way, elegant. One hundred and twenty-three years from now, if the Speaker of the day has cause to do so, he may well refer the Justice Minister of the day to this. And that would seem the definition of history.

The Speaker was shortly thereafter done. He returned to his seat. All sides of the House rose to applaud his effort. And then, after a moment’s rest, the Speaker stood again and got on with the rest of the day’s proceedings.