The Commons: "To all our parliamentarians, where are you?"

While 30,000 Tamil supporters were protesting outside, the discussion in the House was of other matters entirely 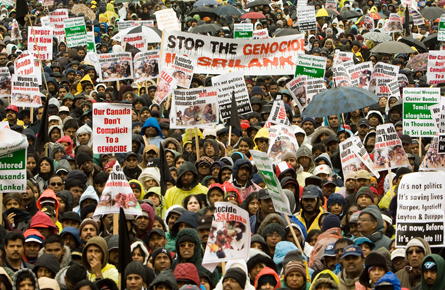 The Scene. Aside from the lonely man in religious garb who often spends his days pacing in front of pictures lamenting abortion, the sight of a public protest on Parliament Hill is perhaps rarer than you might assume. Yesterday, a couple hundred young people sat in circles and smoked pot, though this seemed less an act of defiance than a lazy way to spend a spring afternoon.

For a week now though, crowds of varying size have lined Wellington Street, near the imposing Langevin Block that houses the Prime Minister and his staff, and chanted incessantly about the civil war in Sri Lanka. This afternoon, in perhaps a climactic show of force, more than 30,000 Tamils filled the front lawn, waving black flags, denouncing violence and generally insisting on the world’s attention.

Not that many noticed. Or at least seemed interested in noticing. Indeed, for all the politicians in the immediate vicinity, only the NDP’s Jack Layton was reported to have addressed the crowd. In the midst of the demonstration, the matter merited just three queries in Question Period—ministers Lawrence Cannon and Bev Oda compelled to offer answers for a situation without an obvious solution. Afterwards, Liberal Jim Karygiannis rose on a point of order and requested that the House schedule an emergency debate on the matter. He was promptly shouted down.

It is not, of course, that the political class does not understand the value of direct democracy. Back a few months ago, in the midst of that minor democratic crisis of ours, John Baird vowed his government’s intention to “go over the heads of the members of Parliament; go over the heads, frankly, of the Governor General” and “go right to the Canadian people.” And so they did, staging various get-togethers under the banner of “Rally for Canada.” There Canadians of all persuasions met and participated in just the sort of nuanced and open-minded public debate to which Mr. Baird has dedicated his public life. The other side responded, predictably, in song.

By comparison, the gathering on Parliament Hill today was exceedingly principled. And altogether polite—taking a moment at one point to thank the city of Ottawa and the local constabulary for hosting their get-together.

But a few hundred yards away, within the House of Commons, the discussion was of other matters entirely. MPs offered statements on Martin Brodeur, world peace, the Holocaust, the seal hunt and the various evils of Michael Ignatieff. With his three questions, the Liberal leader asked the government about its funding—insufficient in his estimation—for the science community. Tony Clement, waving his arms and shrugging theatrically in a desperate attempt to be taken seriously, demanded to know more about Ignatieff’s recently revealed plan to destroy the country.

The Bloc and Conservatives traded accusations over the fate of the forestry industry. Jack Layton stood and asked if, in light of new and more ominous economic forecasts, the government would submit to further economic stimulus. “Mr. Speaker, I do not know why the honourable member would ask for a second stimulus package when he voted against the first one,” Jim Flaherty shot back to great applause from the government side.

In the foyer afterwards, Flaherty stood at a microphone and took questions. Someone asked about Mr. Layton’s question. The Finance Minister recounted the story of how he’d put the NDP leader in his place. All were impressed.

Out on the lawn though, there was anguished screaming, a pained-looking young lady with a microphone leading a series of call-and-response chants.

At the foot of the Peace Tower, the crowd yelled at whoever might be listening inside.

“What Do We Want? Permanent Ceasefire!”

A month ago, Liberal Gurbax Malhi had made the obvious mistake of speaking to a similar rally, this one including visible symbols of the Tamil Tigers. Soon enough, video of his appearance was on YouTube and Immigration Minister Jason Kenney was accusing him of “encouraging public manifestations of support for a terrorist organization.” A formal apology from Malhi was emailed out shortly thereafter.

In this crowd of 30,000, there was not an inappropriate flag to be seen. Still, the Liberals chose to meet privately with members of the Tamil community, a press release issued to report the meeting and explain Mr. Ignatieff’s concerns. “I think it was our consensus that the best way to meet with the Tamil community was to do it with their leadership, the best way to have thoughtful and intelligent conversation,” Liberal Rob Oliphant explained after QP.

By the widely accepted rules of Ottawa, this made much sense. By the estimation of the masses on the lawn, this was insufficient. “To all our parliamentarians,” someone yelled, “where are you?”