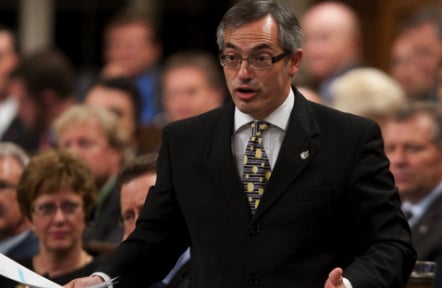 The Scene. Shortly after Question Period began this afternoon, the Prime Minister rose and, without warning, announced a dramatic change in the direction of the country.

“We will treat the public like adults,” he vowed. “That is how we are going to conduct business in this country.”

He did not immediately clarify how this change will be implemented—a shift of this magnitude requiring nothing less than a completely new understanding of national governance and the public space. Nor did he say when he expects this edict to take effect.

Presumably, no matter how committed Mr. Harper is to this idea, it will have to wait until after the debate on the census has subsided.

Not least because the minister in charge of the file often, and quite literally, takes to flailing away in public like one of those wacky waving arm flailing tube men, it is nearly impossible now to say exactly what that debate is about. Except to say that it is mind-numbing.

Yesterday, for instance, during debate in the House of Commons, a government backbencher was moved to lament that anyone would suggest a citizen be thrown in jail for refusing to disclose what sort of cereal he or she eats in the morning. So it was that Liberal Marc Garneau, a former astronaut, educated in physics and engineering, was compelled to rise and use a few precious moments of Parliament’s time allotted to him as a duly elected representative of the citizens in Westmount—Ville-Marie to note that no one has ever been imprisoned for failing to comply with the census and, for that matter, that the last census asked nothing about whether you prefer corn flakes to shredded wheat.

For his part, Industry Minister Tony Clement continued to lament that anyone would threaten Canadians with imprisonment, this despite the fact that the Liberal motion being debated yesterday advised the government to withdraw the threat of incarceration—indeed that the possibility of such a sanction should be eliminated is perhaps the only thing on which all sides are more or less agreed.

Mr. Clement similarly wondered why anyone would agree that the government should “harass” citizens “until they relent and comply” with the census. Moments later, he explained that the government will, to ensure a sufficient response to its voluntary survey, use “direct mail outs highlighting the importance of the NHS and reminders to non-respondents to complete their forms.” And while, he “simply cannot agree with those who endorse any sort of a coercion as acceptable and indeed desirable government policy for the long form census,” the threat of a fine will still accompany the short-form census.

Indeed, amid all of Mr. Clement’s waving about, here would seem to be the remaining point of vaguely coherent concern: the belief that what distinguishes one part of the census from the other is that some of the questions included in the long form are unduly intrusive. Only it has never quite been fully explained which questions are included in this complaint, nor why those questions couldn’t simply be deleted. Except, of course, to say that the state has no business in the Count Chocula consumption of the nation.

Undaunted or simply resigned, the Liberals have taken now to simply listing all of the organizations, community groups and professional associations—now including the elected governments of the two most populous provinces in the dominion—who oppose the government’s chosen procedure.

“The Canadian Federation of Independent Business, the chambers of commerce, the Bank of Canada, they all say the same thing. Scrapping the long form census is a mistake,” Michael Ignatieff reported this afternoon. “Why will the Prime Minister not listen to these Canadians?”

“Our position is very clear,” the Prime Minister ventured in response. “There will be a long form that will be distributed to more households than ever before. We encourage people to complete it. We do understand when some people have reticence about giving out personal information. The way to deal with the public, in this day and age, is not to threaten them with fines and jail terms or taking away their employment insurance as some in the opposition have demanded. We will treat the public like adults. That is how we are going to conduct business in this country.”

And thank heavens for that. Because surely what this nation needs now more than ever is a mature approach to public administration and democratic discourse. Let us move boldly into this future. And let us do so sometime soon.