The confidence of Andrew Scheer

The opposition leader talks to Maclean's Paul Wells about building pipelines, working with Trump, Canadian values and why he's ready to be prime minister

“I think there’s a fine line between confidence and arrogance,” said Andrew Scheer, “and I would by no means presume to tell Canadians what is going to happen.”

But in an interview on Tuesday with Paul Wells—in front of a live audience at the National Arts Centre in Ottawa—Scheer delineated a not-too-distant future in which he is prime minister. The day earlier, an Angus Reid opinion poll showed Scheer ahead of Justin Trudeau by 13 percentage points as the best suited leader on the economy, and his confidence came out in the form of imagination.

He named the first bill he would enact as PM; he defended his support for Brexit by comparing the European Union to a fictional North American equivalent, and he assigned a metaphor to the summer jobs controversy by accusing the Liberals of “peering into the minds of Canadians.”

On the first day of Spring, at his highest personal ratings yet, in a room enclosed by 16 glass window panels and two sets of glass doors, an assured Scheer peered into his glass ball.

“I hope that [Canadians] see in me and my team of shadow ministers and my caucus a government-in-waiting, and I could step in the day after the election and govern this wonderful country,” he said. “When I use language like that, I want to project the idea that I am confident. I believe very firmly that, not only am I capable of doing it, but that my team is capable of doing it and that our policies can work for Canadians.”

Scheer did not flatly rule out working with the NDP after the next election in a minority situation “to try to make Parliament work.”

When reminded that no party has brought down a first-term majority government since R.B. Bennett’s of 1930 (only the second since Confederation after Alexander Mackenzie in 1873), Scheer flipped the logic via his experience as an insurance broker: “when you point out that it hasn’t happened in a while, my insurance brain tells me we’re due for one.”

To elaborate on his government-in-waiting: “I made a commitment that our first piece of legislation in 2019 when I’m prime minister will be an act to repeal the Carbon Tax Act,” he said. “Canadians didn’t vote for a carbon tax. Justin Trudeau campaigned, promised that he wouldn’t create a carbon tax.”

In fact, Trudeau announced his carbon tax plan eight months before the 2015 election. Scheer said he would meanwhile support oil and gas projects like the Northern Gateway pipeline, which would’ve opened up access to Asian markets. And he questioned if Trudeau wants to build even approved pipeline projects, including the ill-fated Energy East proposal. “All of us lose when we don’t get what we could be getting on the world market because we’re just selling to one spot.” 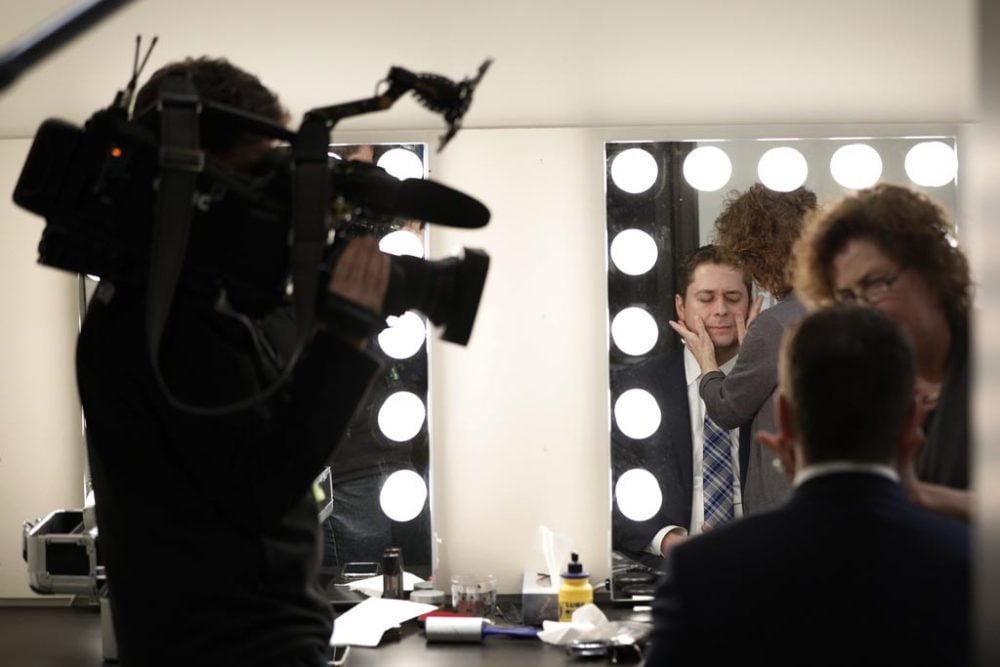 That “spot” has a U.S. president whose rhetoric could help Scheer come to power, but he refuted the idea that he must cater to Trump supporters in Canada. “The Conservatives win when we have a positive message, an aspirational message,” he said. So will they run attack ads in the next election? “We will run ads that show the contrast between what we are proposing and the effects of the Liberal government.”

To show why he supports Britain leaving the European Union, Scheer sketched a continental union in North America. “You can imagine if part of NAFTA was to have kind of a super-national government maybe anchored in New York, and Mexican and American delegates could pass laws overruling Canadian laws, or to establish a justice system that would strike Canadian laws down or Canadian court decisions down, you can imagine, I don’t think Canadians would’ve signed onto that in 1988.”

Though Scheer argued the economic benefits of Brexit, Wells said, “I admit to remaining a skeptic.”

Among the top questions Maclean’s readers wanted to ask Scheer was why he is working with people associated with Rebel Media, including his campaign director, Hamish Marshall, a former Rebel board member. Scheer replied that the two things should not be conflated. While Scheer made the decision to no longer appear on Rebel Media, he added, “I’ll leave it to other people to decide what they want to read or look at.”

Scheer called out the Liberals for policing Canadian values through changes to the federal summer jobs program, which could deny money to organizations with religious affiliations. “What the Liberals have done here is allowed the government to peer into the minds of Canadians to see what goes on up there, what their views are, what their personal opinion is,” Scheer said. “That’s not right. Every country in history that has gone down dark paths, where governments take on too much control and really intervene and take away those freedoms, often start with an attack on the freedom to disagree.”

Scheer said he’s begun campaigning for 2019. His response to another question submitted by a reader, “Convince me you’re not Stephen Harper”: “I’ve got my own style. I’ve got my own approach. I’ve got my own way of handling things,” he said. “Stephen Harper kept our party united … now that chapter’s been closed. Canadians chose something else in 2015. We have the Liberal chapter being written right now, and our job is to make sure that I get to write the next one.”