The Conservatives introduce new measures in wake of Dykstra complaint

A report prepared for the Conservatives said the party failed to properly investigate the allegation. It was commissioned after Maclean's reported on the 2015 complaint. 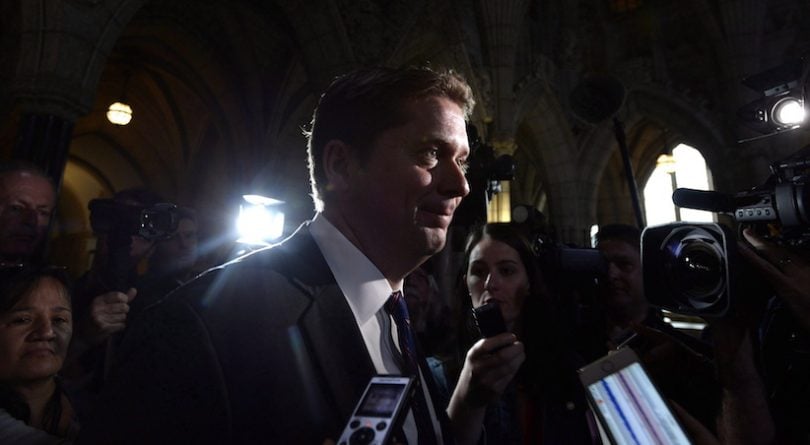 Scheer makes his way past reporters as he leaves a caucus meeting on Parliament Hill in Ottawa on Wednesday, June 13, 2018. (THE CANADIAN PRESS/Justin Tang)

The Conservative Party of Canada is adding more detailed police checks to its vetting of candidates and creating a specific policy for handling complaints made against MPs and candidates.

The moves are among six recommendations made by lawyer Carol Nielsen, who was hired by the Conservatives in March 2018 to probe how Rick Dykstra was allowed to continue on as a candidate in the 2015 election after the party learned he was accused of assaulting a woman who worked for another MP.

Nielsen was brought in by the party after Maclean’s reported on the sexual assault allegation against Dykstra and the party’s handling of the complaint in 2015 when Dykstra was an MP. Nielson makes clear in her report that she was not asked to determine the validity of the complaint.

Dykstra, who represented the southern Ontario riding of St. Catharines for nearly a decade, denies doing anything wrong. He lost his seat in the election before the allegations were made public.

Nielsen’s report says party officials failed to make the necessary inquiries about the allegations, a failure she blames at least partly on the lack of any protocol for handling such complaints.

She said the party did ask its lawyer to make inquiries about the matter, which included a chat with Dykstra and another senior political staffer. But the party did not try to get any information from the woman who made the allegations—who had asked for privacy—and Nielsen said the inquiries made of Dykstra were not good enough.

The party also failed to talk to the police about their investigation. The party relied on Dykstra’s word that the police had decided not to lay charges but police said last year the investigation was closed because the complainant didn’t want to proceed.

Nielsen said it’s unclear whether a better review of the matter would have changed the party’s decision to let Dykstra run. But Ray Novak, then-leader Stephen Harper’s chief of staff at the time, said last year that had additional information about the matter been known, such as why the police investigation was closed, Dykstra would have been fired as a candidate.

Senior officials in the Conservative Party became aware of the complaint against Dykstra during the 2015 campaign and there was significant disagreement about how it should be handled.

Former prime minister Stephen Harper said last year he made the decision to keep Dykstra on the ballot and that he made it based on the information he had at the time.

Guy Giorno, who was the national campaign chair in 2015, thought Dykstra should have been fired during the campaign. Last year Giorno called the Nielsen investigation “a sham” and said he would have no confidence in the results, but he was pleased with the findings released Friday.

“The report confirms my position that Dykstra should have been dropped as a candidate,” he said in an email to The Canadian Press. “I am pleased to see my input reflected in the recommendations and look forward to seeing them implemented.”

Tory Leader Andrew Scheer has appointed Hartley Lefton, a Toronto lawyer who led the organizing of the Ontario Progressive Conservatives’ leadership race last year, as a compliance officer to ensure the recommendations are implemented.

“I’m confident our campaign team now has the tools they need to ensure that and I look forward to Mr. Lefton leading the implementation of Ms. Nielsen’s strong recommendations,” Scheer said in a news release.

A party spokesman said Scheer would not be commenting beyond what he said in the release.

All political parties fired multiple candidates throughout the 2015 campaign for various reasons, often due to racist or sexist posts on social media. The Conservatives fired at least seven candidates during the campaign, including Jerry Bance, who was found to have been in a CBC Marketplace video that caught him urinating into a mug in the kitchen of a client’s home where he was repairing an appliance.

The fact that Bance was immediately dropped and Dykstra was not was a point of contention among the top Conservatives in 2015.

The Nielsen report notes that in 2015 the Conservatives required all candidates to submit police record checks from the RCMP or local police in their ridings. But the report notes the party should request broader criminal record and judicial matters checks, including records of absolute and conditional discharges and any outstanding charges.

“This broader criminal record check may help the party to identify relevant concerns in respect of both applicants and candidates before the concerns intensify in the midst of an election campaign,” Nielsen wrote.