The Diefenbunker wasn't obsolete. It was ahead of its time.

Canada's government never needed to flee to the emergency headquarters as nuclear bombs fell from the sky. But the bunker was more than just an empty shell. 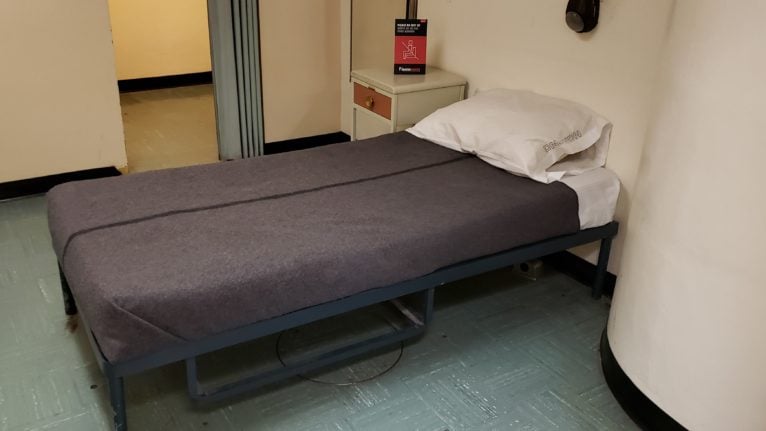 The prime minister's room in the Diefenbunker. (Photo by Nick Taylor-Vaisey)

I stood alone in front of the prime minister’s bed, wearing a mask. He was nowhere to be found, his sheets taut and unused. His washroom was small, corroding in places. His desk nearby was sparsely furnished with just a small clock and a rotary phone. There was an eeriness to the space, punctuated by its isolation from the outside world. News of a burbling cross-border trade war seemed far away, as did a persistent public health threat that knew no borders. The PM’s bedroom, safely cloistered from the outside, offered rare, silent refuge. It helped that I was standing in a subterranean chamber surrounded mostly by farmland, down the street from a village named after a river named after a sucker fish.

Only one prime minister ever officially visited this place, known as Canadian Forces Station Carp until its decommissioning after the Cold War, when Pierre Trudeau stopped by in 1977. Now, as the elder Trudeau’s son guides the country through a coronavirus pandemic, the Diefenbunker—named after the prime minister who championed the facility at the height of the Cold War—is open to cautious visitors.

The Diefenbunker functioned as a communications hub that could transform into a central emergency government headquarters that hoped to sustain essential operations after a nuclear attack. But its cover was blown well before it was up and running.

FROM 1969: A hush-hush report on Ottawa’s top-secret hidey-hole

Canadians knew a series of bunkers across the country were in the works as early as Aug. 21, 1958, when Diefenbaker told the House of Commons about plans to build a “decentralized federal system of emergency government with central, regional and some zonal elements.” He justified the cost of construction by appealing to a worst-case scenario. “The course of reality,” he said, “demands … the assurance that should nuclear war come, government can be carried on.” In his reply to Diefenbaker, future prime minister Lester Pearson presciently warned that “there can be hitches even in the best of plans.”

In 1961, while the ostensibly secret bunker west of the nation’s capital was still under construction, a Toronto Telegram reporter flew over the site and, noticing the depth of the dig, spoiled the surprise—and coined an infamous moniker. The next year, Diefenbaker tried to throw off the scent, denying to the Commons that a single facility would house most senior government officials. Pearson, still the opposition leader, appeared to take him at his word.

Carp merited the occasional mention in Hansard. In 1960, CCF MP Hazen Argue probed what was really going on at the facility. The next year, Liberal MP Judy LaMarsh mused about “what we need to bury in Carp, or whatever it is,” in the case of all-out war. Only a year after that, a study submitted to the defence committee referred to the alternate home for an emergency government as a “carefully guarded secret”—so much for that—”commonly known” to be in the hinterland west of the capital.

FROM 1982: How to stop worrying and love the bomb

In 1975, Trudeau even complained in the Commons that his predecessor “had built a whole series of government facilities out at Carp in which to house himself and the government if any violence should overtake him.” Diefenbaker, still an MP at the time, howled at Trudeau for mentioning, even in passing, “the most secret place in Canada.” He even declined to repeat its location, accusing Trudeau of committing “an offence against the security of our country.” The PM fired back that years earlier he’d read about “the underground complex, or whatever it is,” in Weekend magazine. Indeed, the secret had been open since almost the very beginning.

Bill Renaud, who served several years at CFS Carp and later managed all the emergency bunkers across the land, lamented the loose lips in the nation’s capital. After Diefenbaker, “there weren’t many high-level politicians who supported the continuity-of-government program,” says Renaud. “We had constant problems with politicians lifting its cover.”

A layer of wishful thinking helped sustain the Diefenbunker. The facility was built on a bed of gravel and made to withstand a five-megaton nuclear blast at the surface. But as crews hammered away at the structure in the autumn of 1961, the Soviet Union detonated a bomb with 10 times the destructive yield. And eventually, powerful weapons found relatively shallow bunkers to be no obstacle at all.

And yet the bunker endured, staffed every hour of every day for 32 years. The kitchen was even famous for its menu, which tour guides claim was voted second-best in the military, losing only to a post in Quebec whose secret weapon was poutine.

A poster hanging in the Diefenbunker. (Photo by Nick Taylor-Vaisey)

Garry Dowd first served in the bunker in 1963. Dowd says his first commanding officer, “Jig” MacDougall, forced men to live underground for at least a year before he’d let them find their own residence somewhere else. Ed Gauthier, who spent the Cuban Missile Crisis in subterranean lockdown, said the enlisted men would spend weeks beneath the surface. “We became earthworms,” he jokes, recalling superiors forcing the young men outdoors. When they did get outside, they were sworn to secrecy. “We couldn’t even talk about the lights above our bed,” says Dowd, who described his sleeping quarters in the early days, pitch black and dead silent, as “like a coffin.”

Anyone who was posted to Carp was keenly aware of the stakes. They knew if bombs started dropping, even if they survived they’d likely never see their families again.

But many of the Diefenbunker’s alumni remember their underground lives fondly. They loved the mess hall, because the kitchen was always capable of feeding the prime minister and governor general in a time of crisis. “They don’t eat baloney,” quips Dowd. They adapted to a world of vertically striped pillars, which reduced claustrophobia, and colourful furniture, which disrupted the monotony of off-white floors, ceilings and walls. They jogged around the perimeter of a Bank of Canada vault that would’ve stored the nation’s gold. And they found solace in an outdoor winter carnival that, for a few days, got everyone outdoors.

The Diefenbunker’s ethos is coated in an eerie nihilism that underscores its origins in a world that feared apocalypse. CFS Carp’s crest prominently featured Cerberus, a multi-headed dog in Greek mythology that guarded the gates of the underworld to prevent the dead from leaving. Hercules is said to have captured the beast—a nearly impossible task—in a final act of labour at the behest of King Eurystheus, who’d promised the hero immortality in return.

How that ancient story applies to an underground bunker in the 20th century is a puzzle. Cerberus allowed the dead entry to the underworld. A morose interpretation of the mythology might conclude that anyone who cleared the bunker’s decontamination room, escaping whatever terror consumed the outside world, had only entered an inescapable chamber—and was, thanks to humanity’s greatest failure, already dead. Of course, the Diefenbunker faced no such test. But that alternate history offers a horrifically ironic backdrop to the museum’s ingenious retooling in recent years as an escape room.

The bunker’s willing captives never had to save their country from nuclear winter, but their not-so-secret posting trained them masterfully in the art of isolation. As millions of Canadians now acclimatize to intermittent lockdowns and invisible viral enemies, the Diefenbunker seems less a Cold War relic than a crash course in living apart from our loved ones. Turns out the aging gateway to the underworld was just ahead of its time.