The 'excessively violent' election ad, paid for by the Manning Centre

Facebook pulled an anti-Trudeau ad from a third-party group funded by the Manning Centre. The organization has backed a number of other intense ads. 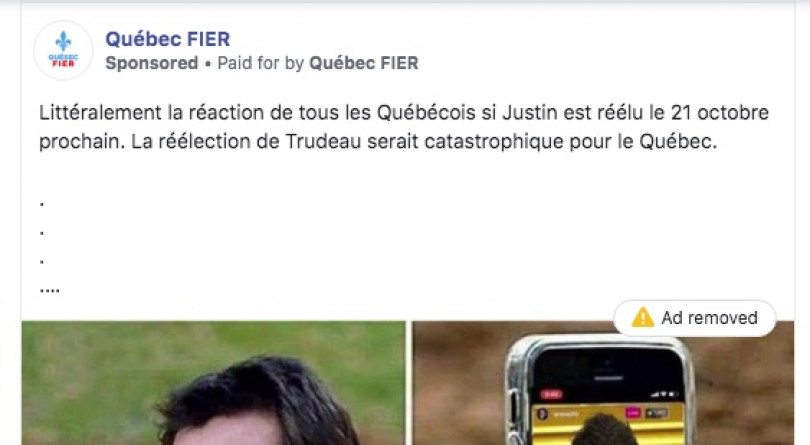 Ad from the group Quebec Fier (Image from Facebook)

An anti-Liberal election ad paid for by the Manning Centre has been taken down by Facebook for excessively violent content.

The ad, one of a number of intense ads the Manning Centre is funding through third-party groups it supports, shows actor Keanu Reeves buried up to his neck in the dirt, looking at a mobile phone showing Justin Trudeau, saying, in French: “Thank you for the second mandate.”

The ad is captioned: “Literally the reaction of all Quebecers if re-elected next Oct. 21. The re-election of Trudeau will be catastrophic for Quebec.” Quebec Fier, a third-party group funded by the Manning Centre, started running the ad on Facebook on Oct. 2, Facebook’s ad registry shows.

The ad was pulled because it violated Facebook rules, said Erin Taylor, communications manager for Facebook Canada in an email. “The ad was disapproved in line with our Advertising Policies related to sensational content which states in part that ads must not contain excessively violent content.”

The meme, which uses stills from the American thriller Knock Knock, is still live on Facebook as a sharable meme, but the group can no longer pay to have it “boosted.” 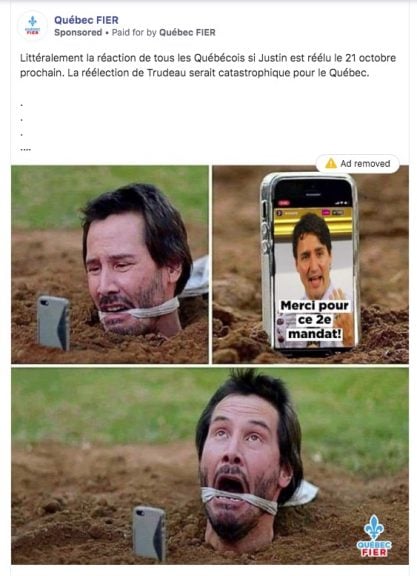 Ad from the group Quebec Fier (Image from Facebook)

Nicolas Gagnon, communications director for Quebec Fier, says the group is proud of the ad. “About 108,000 Quebecers have seen it and it has 1,700 likes and 1,700 shares and the comments are supportive. It has more than 16,500 engagements.”

Gagnon said that when Facebook informed the group that the ad was disapproved, they decided not to appeal, so that they could spend the money advertising other posts.

Many of the ads are intense, accusing Justin Trudeau of being a groper, a racist and a hypocrite.

Troy Lanigan, president of the Manning Centre, said the organization may provide the money, but it is not micro-managing the messaging.

“Our statement on this is that we donated to Canada Strong and Proud,” he said in an interview. “They’re independent. We don’t have any editorial control. We don’t have to agree with them on everything. We trust they create clever content, that’s edgy meme advertising, and earning attention that way.”

Another ad run by a group backed by the Manning Centre used a cartoon by Halifax freelance cartoonist Michael De Adder without permission, an apparent copyright violation.

De Adder said in an email Friday that he did not consent to his work being used in a political ad.

After Maclean’s brought it to the attention of Vitor Marciano, an Edmonton conservative political operative that corporate records show works as a consultant for Canada Strong and Proud, he contacted De Adder to apologize.

The Manning Centre’s statement of purpose on file with Corporations Canada says that it is “dedicated to the advancement of democratic principles, practices and alternatives in Canada and abroad that recognize the intrinsic worth of the individual … through … development of educational materials and delivery systems to strengthen knowledge and skills of those involved in Canada’s democratic process.”

Lanigan said that by promoting intense, online ads like the ones Canada Strong and Proud is spreading, the group is promoting small-c conservative principles.

But he acknowledged the ads do not reflect the personal style of founder Preston Manning, the former Reform Party leader.

“Preston Manning’s more deliberative approach to politics, I think that died 20, 30 years ago in this country,” Lanigan said. “The nature of where we’re headed now is far removed from the more deliberative discussions we were having in the 1990s. How we move policy in this country and other western countries has changed dramatically over the last 20 years. I’m not saying I like it.”

And Lanigan defended posts that seemed to take aim at Trudeau’s personal behaviour.

“As far as some of the specific messaging goes around Trudeau, I think it’s fair to say that his brand and his party’s brand has been built around his moral preening, so of course his ethics, his behaviour are going to be an issue in the campaign. The message being asked, hard, by a lot of third party advertisers, is have his actions matched his words? I think he’s absolutely invited those questions.”