The feds want to dole out millions to students. WE got the gig.

Politics Insider for June 29: Trudeau and WE Charity come under fire from all sides, Michael Kovrig's wife speaks out, and the difference between men and women (voters) 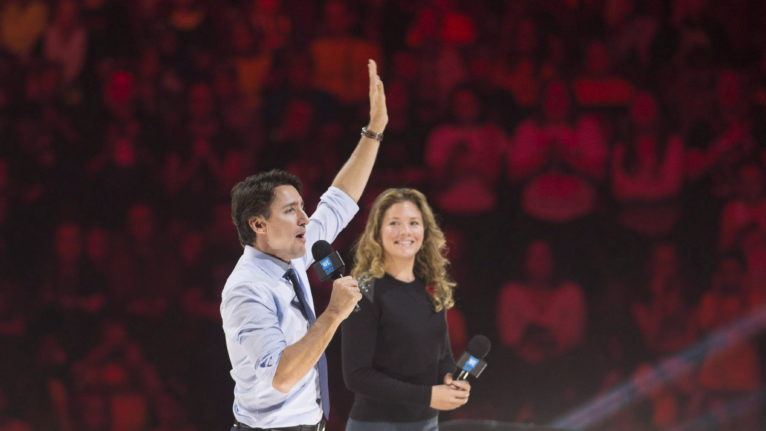 WE vs. Them. Last week, after unveiling a $912-million grant program for Canadian students (the Canada Student Service Grant—a.k.a. the un-pun-able CSSG), Justin Trudeau came under fire for inviting mega-charity WE to administer it. Trudeau defended the decision, saying it wasn’t made by his wife (who hosts a WE podcast) or himself (who has spoken at several of its events), but rather the non-partisan public service. To dole out the cash, he said, the government needed the infrastructure, resources and connections to reach tens of thousands of students. What better way than by employing a youth-based charity?

Well, maybe… use the government? At least there’d be better oversight, according to Pierre Poilievre, Dan Albas and Raquel Dancho. Yesterday, the three Conservative MPs submitted a letter to Auditor General Karen Hogan, requesting she include the CSSG in her final report on the government’s pandemic spending. Their argument: by outsourcing this grant, the government is circumventing the traditional scrutiny of the Official Opposition. Notably, the letter falls short of accusing the government of cronyism—not that they need to, since others are making the claim for them.

Meanwhile, members of the volunteer community want nothing to do with the whole affair. In an interview with the Globe and Mail, Paula Speevak, the CEO of the non-profit organization Volunteer Canada, said their group declined to work with WE when approached to help it administer the grant. Their reasoning had nothing to do with government regulations or cozy contacts, but the ethics of volunteering itself. Recall that the whole purpose behind this grant, aimed at 15-to-30-year-olds, is to pay out $1,000 per 100 hours spent volunteering with groups helping to soften the impact of COVID-19, up to $5,000 for 500 hours. Except that isn’t really volunteering, as Speevak points out: that’s a $10-per-hour job, which is itself an exploitative wage below the legal minimum.

Kovrig’s wife speaks out. After Trudeau flatly rejected the idea of a “prisoner swap” last week, which would see Canada release Huawei CFO Meng Wanzhou in exchange for detained Canadians in China Michael Kovrig and Michael Spavor, Kovrig’s wife, Vina Nadjibulla, appeared on CTV’s Question Period yesterday to express her disappointment. She acknowledged the danger of setting a precedent, but argued, “We cannot ensure the protection of Canadians in the future at the cost of Michael’s freedom today.”

In reaction to the open letter last week which suggested Trudeau consider a prisoner swap, a second group of Canadians, mobilized by the Macdonald-Laurier Institute think tank, published an open letter to the Prime Minister that encouraged him to ignore the first letter. An excerpt:

Historically we have only declined to extradite in very narrow and exceptional cases. What is being asked of us in Meng’s case is that we abandon this honourable tradition, not because of some flaw in the extradition case brought by the Americans, but because China is holding our citizens hostage. The integrity of the rule of law and our judicial system requires that we decline to do so.

Don’t have a cow, Schumer. The minority leader of the U.S. Senate, Chuck Schumer, penned a letter to U.S. Trade Representative Robert Lighthizer, urging him to look at Canada’s “lack of transparency in milk-pricing regulations” and to “eliminate harmful dairy trade practices” by Canada. The call comes days before the New NAFTA (or U.S.-Canada-Mexico Agreement, or USCMA, or whatever) comes into effect this week on July 1.

The Tory tightrope. Everyone running to lead the federal Conservative party faces a dilemma: to win the nomination, they need to win over social conservatives, who oppose abortions and a broad climate strategy. But to win over average Canadian voters, it will help to have a broad climate strategy and keep quiet on abortions. A new survey by Leger and the Association for Canadian Studies asked 1,500 Canadians about the subject, and found that 23 per cent of respondents would be “more likely” to vote Conservative if their leader kept the abortion debate shut, and 32 per cent would be persuaded by a comprehensive plan to reduce greenhouse gas emissions.

In other polls, 338Canada’s Philippe J. Fournier reviewed some data to find that the biggest divide in Canadian politics lies between men and women. He dug into the numbers from that recent Leger survey, as well as new polls by Nanos and Abacus, to fantasize about another hypothetical scenario: What if only men voted? And then, conversely, what if only women voted? The answers: if men voted, the Grits and Tories stay in a virtual tie, with the Liberals slightly ahead. If only women voted, the Liberals would win a landslide majority before election night reached Manitoba. As Fournier notes:

Yet, it is worth stressing that we have seen similar trends, albeit of lesser amplitude, in voting intentions in Canada: In the 2018 Ontario election, men supported Doug Ford’s PC in much greater numbers than women; the same could be said about the 2018 Quebec election, when the right-of-centre CAQ had higher support from men than women. Ditto Jason Kenney’s UCP in the 2019 Alberta election. South of the border, polls clearly show Democratic candidate Joe Biden leading by comfortable margins among American women, whereas American men are far more divided between Biden and President Trump.

The breaking-off point. What prompted Jay Hill, a longtime Conservative MP, to kickstart the Wexit Canada party? On Question Period yesterday, he said it was the Liberals’ resounding defeat in Western Canada in the 2019 election that triggered his decision. After all, what other conclusion could be reached when a party falters in Western Canada and still holds onto power? “It was very clear then that the West is once again completely out of step with central Canada,” he explained. The Wexit party is hoping to run 104 candidates across Alberta, B.C., Saskatchewan and Manitoba in the next election.

One at a time. In lieu of a contact-tracing app to better understand and contain the spread of COVID-19, humans are stepping up to the plate. Maclean’s Aaron Hutchins dove deep into their world, interviewing contact tracer Tracey Ashby about her routine:

Ashby is among Canada’s growing army of thousands contact tracers who hold one of the keys to society’s successful reopening. In 11-hour shifts that can veer from breezy to fraught with tension, they take on the roles of investigators, teachers, therapists and confidantes. For most people they call, they’ll only ever be a voice on the phone. For the country as a whole, they form an invisible, defensive line to ensure the coronavirus doesn’t get a renewed foothold and start spreading like wildfire.