The final 338Canada projection: The most uncertain federal election in decades

Philippe J. Fournier: The night before the election, there is no certainty in the numbers. We could end up with the first popular vote and seat split in 40 years. 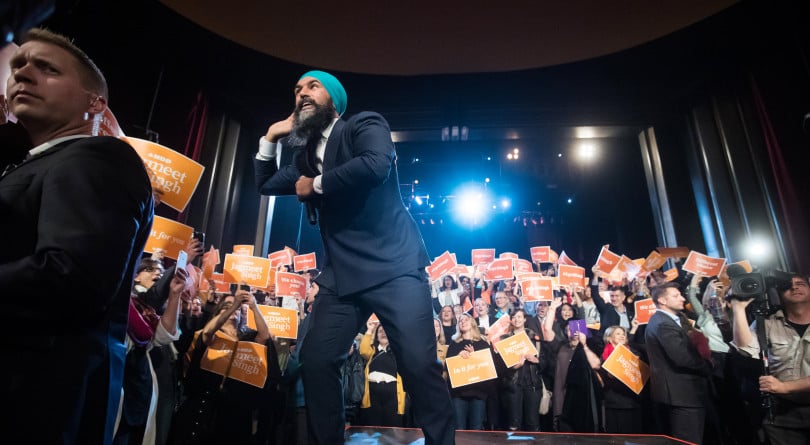 Well, here we are. The day before election day. A flurry of polls have been published in the last 24 hours, and many more will probably come later tonight.

Here is the national 338Canada popular vote projection for Oct. 20, 2019. The latest polls from five polling firms are indicated by black dots:

Both the Liberals and the Conservatives find themselves in a deadlock at around 32 per cent apiece. The NDP has gained significant ground since the Commission debates, but has plateaued in the last few days. The Greens have slipped below 10 per cent.

In Quebec, the Bloc Québécois will battle the Liberals for first place and currently stand at an average of 30 per cent in the province.

Finally, Maxime Bernier’s PPC never really took off—even with Bernier’s participation at the debates—and ends this 2019 campaign at an average of just below 3 per cent nationally.

Let’s look at how this level of support translates into seats. Naturally, we should keep in mind that seat projections contain a fair amount of uncertainty, and the numbers below should be considered as averages only. They can/will be a little off from tomorrow’s results, but they also should give us a clearer view of the political landscape…

… unless polls are wrong by significant margins of course, but more of this later.

Let’s go from east to west.

[Numbers may not add up to 32 seats due to rounding.]

We expect the Conservatives to make some gains in New Brunswick and Nova Scotia. The NDP has high hopes in St. John’s East and could cause a surprise in Halifax.

The story of this election in Quebec is the surge of the Bloc Québécois shortly after the first French debate. At first, the Bloc ate into Conservative support in the province. Then the Liberals also lost ground. Polls in Quebec show that the Liberals and Bloc remain in a near tie in voting intentions, but the Bloc is first among francophones.

Questions remain whether the Conservatives will lose some of their seats in the Quebec City region, where the party performs at its best in the province. The NDP, which won 16 Quebec seats in 2015, should be reduced to only one or two seats (see Rosemont-La Petite-Patrie and Berthier-Maskinongé).

Obviously, Beauce should also be interesting.

In 2015, the Liberals won 80 Ontario seats, including a whopping 49 of 55 seats in Toronto and the GTA-905 combined. That total could be hard to replicate for the Liberals, but the latest numbers all show the LPC ahead in the province—although they disagree by how much.

On election night, if we see the Liberals below 60 seats in Ontario, it could be a sign that the Conservatives are headed towards victory.

The Liberals won seven of eight Winnipeg seats in 2015, along with Ralph Goodale’s Regina-Wascana riding in Saskatchewan. However, the Liberals will be fighting to win even half that total in the Prairies.

The Conservatives are polling high in the region and should make net gains compared to 2015.

In 2015, the Conservatives won “only” 29 of the Alberta’s 34 federal seats. The Liberals won two seats in both Edmonton and Calgary (and some by very tight margins).

Numbers for months have shown that the Conservatives were poised for a sweep of the province, and it could still very well happen. The only question mark is Edmonton-Strathcona, where the NDP is currently projected ahead by a hair (it is still projected as a toss up).

British Columbia remains an enigma: Canadian pollsters show very different measures of support for the major parties and, even as the campaign winds down, numbers have not converged towards a consensus. For that reason, you will notice the ridiculously large error bars on the graph:

These wide error bars are not a bug of the model—they reflect the high uncertainty that results when one poll shows the Conservatives leading in the province (Ipsos), others show a statistical tie (Campaign, Léger, Nanos) and others have the Liberals in the lead (Abacus Data). What we can say about B.C. remains vague: 1) the Conservatives should perform well in most rural areas; 2) The Liberals and NDP will be competitive in many Vancouver ridings, and 3) The Greens will hope to expand their base on Vancouver Island.

I do not know who will win tomorrow’s election. The data that’s been made available suggest that we could have the first popular vote and seat split in 40 years (in 1979, Joe Clark won the most seats under the Progressive Conservative banner despite losing the popular vote to Pierre Trudeau’s Liberals by as much as four points nationally). This time, it appears more likely that the Liberals will win the most seats while the Conservatives earn the most votes.

The most likely scenario appears to be a Liberal-led minority, but the odds are so close and the number of toss up districts so high, that I am not ready to make that call. In each of the three provincial elections I have covered, a clear favourite had emerged by the time campaigns were coming to an end. In Ontario and Quebec in 2018, Ford’s PC and Legault’s CAQ were 9-to-1 favourites heading into election day. In Alberta last April, Jason Kenney’s UCP was a 25-to-1 favourite to win the election.

We have no such certainty as of tonight, although a minority scenario appears far more likely than any majority.

Does either party have a path to a majority? Yes, they do, but the data would have to be wrong.

For the Liberals to win a majority, they would have to outperform in Quebec—perhaps hoping the Bloc cannot get its vote out tomorrow. Also, the Liberal party would have to actually increase its seat count in Ontario (80 seats in 2015), which appears unlikely considering the Liberals won 45 per cent of the popular vote in the province four years ago. As of this writing, the Liberals’ poll average in Ontario stands just below 40 per cent.

For the Conservatives to win a majority, they would have to completely sweep the West: at least 25 in B.C., virtually all of Alberta, Saskatchewan, and Manitoba as well as split Ontario down the middle. It’s not impossible, but it’s highly unlikely given the numbers that were published in the past two days.

We will know tomorrow. Go vote. Thanks to all 338Canada readers who followed along for the ride.

Find the projection for your home district below:

CORRECTION, Oct. 21, 2019: An earlier version of this story misstated the number of seats the Liberals won in Winnipeg in 2015.