Justin Trudeau on time pressures, John Horgan on legal strategies, and Rachel Notley on "harassing a project to death." 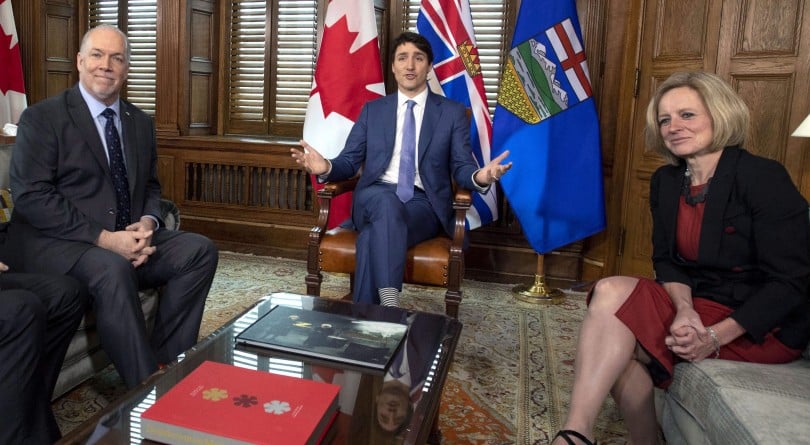 Prime Minister Justin Trudeau emerged from a meeting on Parliament Hill today with Alberta Premier Rachel Notley and B.C. Premier John Horgan to announce that the federal government has entered into talks with Kinder Morgan to offer financial backing for the company’s planned expansion of its Trans Mountain pipeline, which carries diluted bitumen from Alberta’s oil sands to a port near Vancouver.

The offer of the Canadian government’s guarantee that the company won’t lose money if it pushes ahead comes in the face of Horgan’s legal bids to stop the expansion on environmental-protection grounds, both through a Federal Court challenge and a planned constitutional “reference” case, in which B.C. would ask the courts if the province has jurisdiction to block the project.

Notley and Trudeau are allied in advocating the pipeline as vital to getting Alberta’s product to tankers that can ship it beyond the U.S. market, which now soaks up the vast majority of the province’s oil exports. Here are key quotes from Trudeau, Horgan and Notley from their news conferences after the closely watched meeting.

Trudeau on the urgent time pressure behind today’s intervention:

“The focus we have right now is keeping to the schedule that was proposed. We know that the construction season is almost upon us. That is part of what triggered the recent statements from Kinder Morgan on managing risk. We are absolutely focused on making sure that we make this construction season, that we move forward rapidly and responsibly on building this vital energy infrastructure.”

Horgan on his two-pronged strategy of going to court to stymie the project:

“It’s my view that should the courts render a decision that’s counter to our position, then that’s the way it should be… In the Federal Court, that decision we’re expecting within a number of weeks. The reference, which has taken more time than any of us would have hoped—our legal team had to clear their calendars… I’m hopeful it will be done in the next number of days.”

Notley on her frustration with the B.C. government’s legal strategy:

“I think that for the most part what we’ve been seeing from government of B.C. has been a very considered attempt to create uncertainty by coming up with creative areas in which to inject a certain amount of legal debate. I don’t believe it’s in the best interests of the country to engage in esoteric jurisdictional debate for the purposes of harassing a project to death, which is in effect I think is what has been happening up to this point.”