The latest 338Canada projection: Majority or bust for Andrew Scheer?

Philippe J. Fournier: A regional breakdown of the results across the country this week point to tight race and a minority government scenario 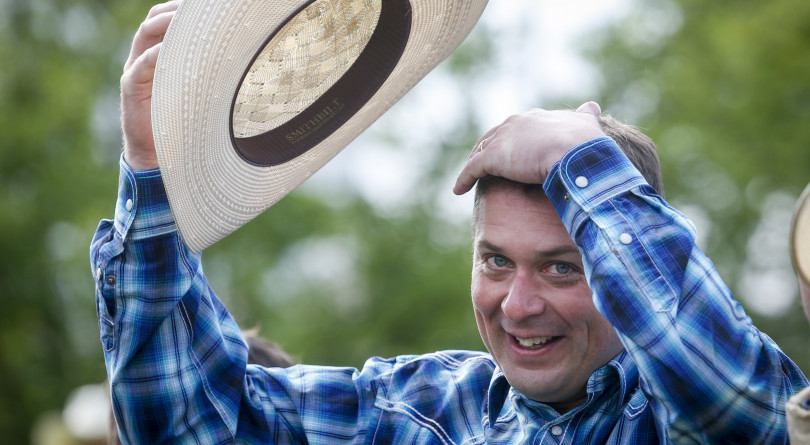 Here is a short excerpt from last Sunday’s 338Canada projection published in Maclean’s: “As we enter the middle of summer, Canadian pollsters will probably take a much-needed break before the fall campaign…”

Well, that’s a prediction that went wrong. Hopefully, it’ll be my worst one this year.

As many as five new federal polls were published last week from Nanos, EKOS, Campaign Research, Ipsos/Global News and the Angus Reid Institute. We also add to the pile a Mainstreet/iPolitics poll for the federal district of Niagara Centre, which contained disturbing numbers for the NDP in a region where it usually performs well.

The complete list of federal polls can be found on this page.

Taken individually, these polls do not tell the same story. Here’s a short recap:

The diverging nature of these latest polls has been detailed and graphed here, and is the main reason this week’s 338Canada projection shows so much uncertainty. Keep in mind that this is a feature, and not a bug: if the data is uncertain, the projection is uncertain. 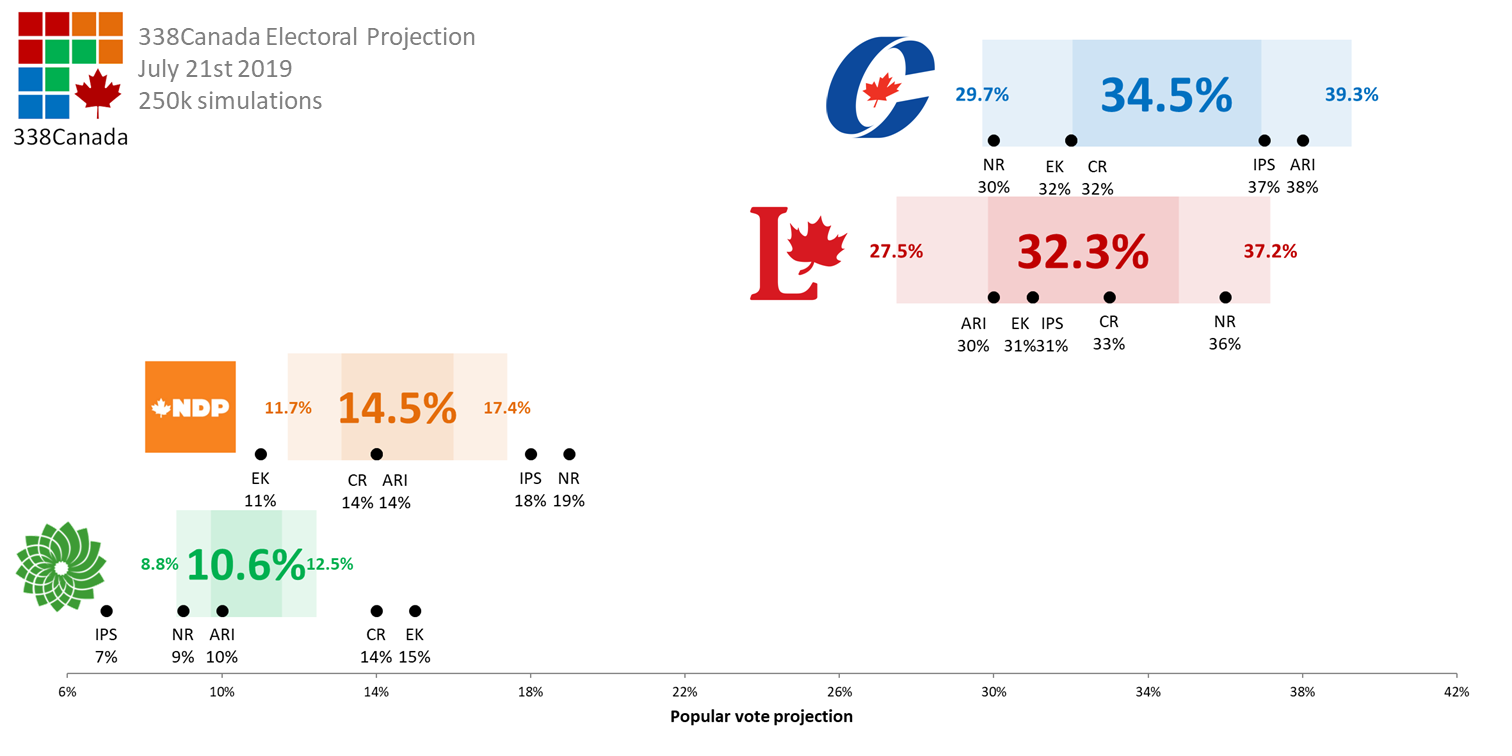 The Conservative Party remains on top of national voting intentions with an average of 34.5 per cent, a two-point lead over the Liberals, whose average stands at 32.3 per cent.

There is significant uncertainty (and noise) with the race for third place, as the NDP has polled between 11 (EKOS) and 19 per cent (Nanos) last week. The NDP’s average remains stable at 14.5 per cent. The Greens’ poll numbers have been just as wild: from 7 per cent (Ipsos) to 15 per cent (EKOS) average stays just above the 10 per cent threshold with 10.6 per cent.

The Bloc québécois stands at 19.1 per cent in Quebec (4.4 per cent nationally). Maxime Bernier’s PPC is at 2.8 per cent.

Seat-wise, we still have a dead-heat for first place. The Conservatives win an average of 149 seats and the Liberals, 147 seats. Even though a normal-size polling error in favour of any of those two parties could wildly tip the seat projection, this data tells us that the most likely scenario remains a minority government. 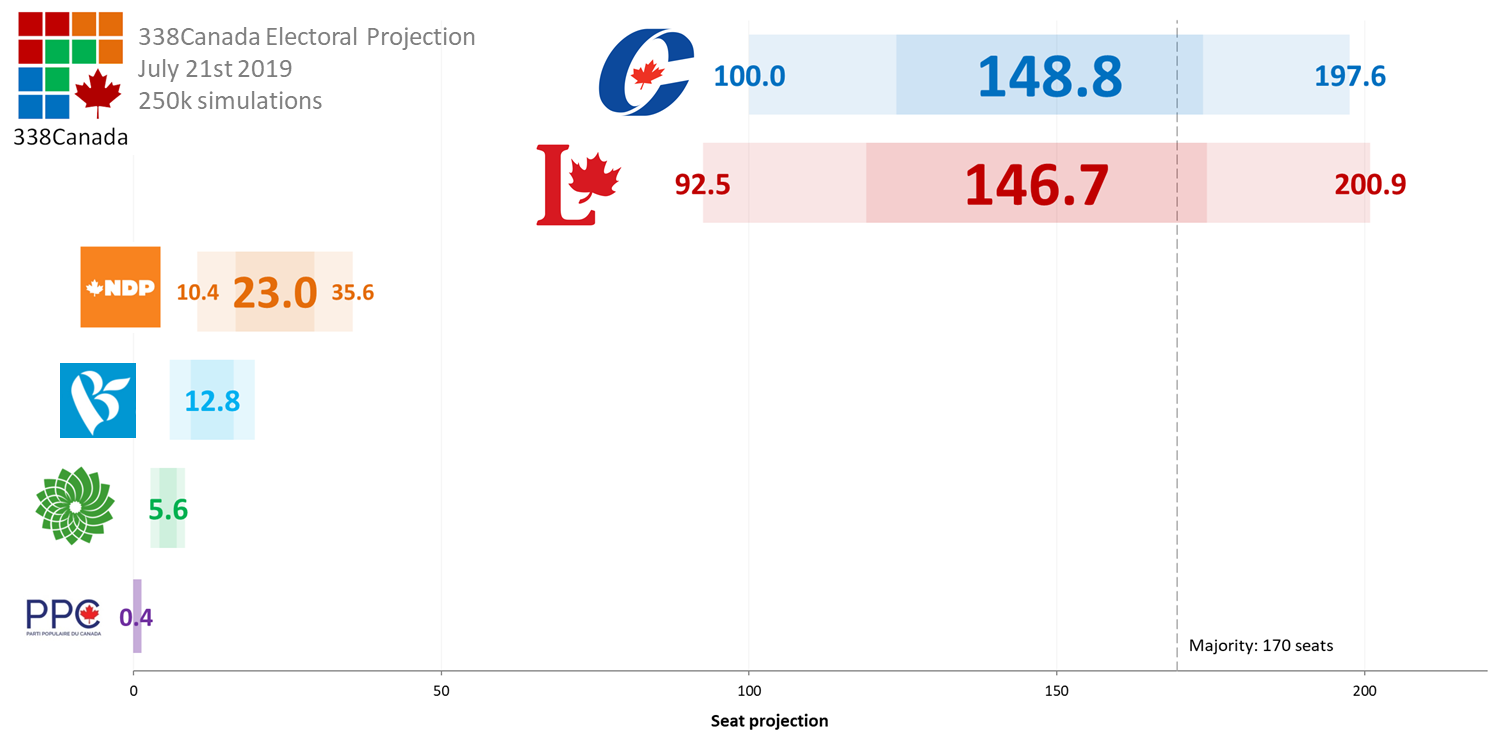 Although Maxime Bernier remains competitive in Beauce, he is not currently projected ahead against the CPC challenger.

In Vancouver-Granville, independent candidate Jody Wilson-Raybould is projected leading a very close race against the Liberals.

As for the odds of winning the most seats, current data suggests it is a real toss-up, see graph below: 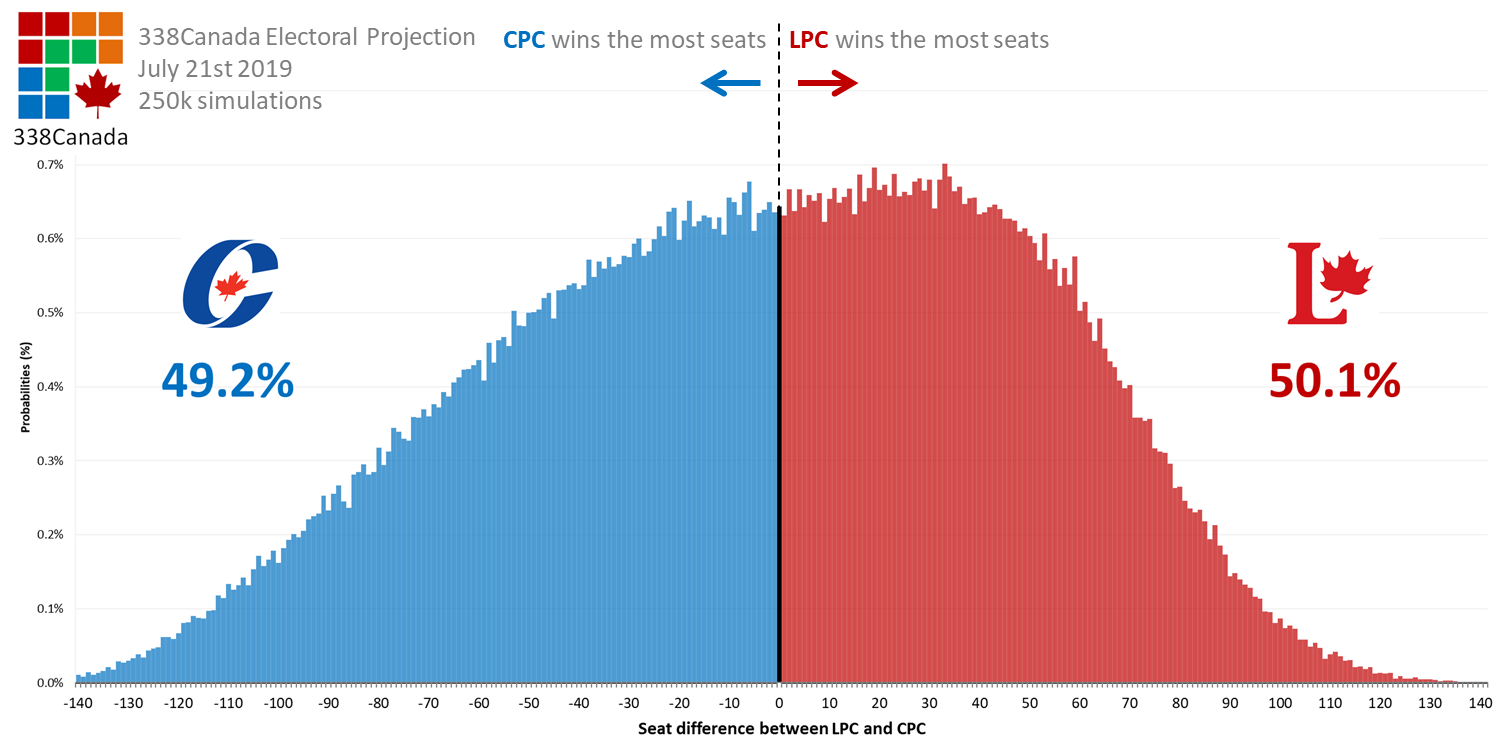 Let us take a look at the regional vote and seat projections. We present the data here for six different regions: Atlantic, Quebec, Ontario, Prairies (MB/SK), Alberta, and British Columbia. Note that this is not an editorial choice, but the usual regional divisions chosen by pollsters in Canada.

In the Atlantic Provinces, the Liberals still lead the Conservatives on average, but the gap is nowhere close to the 2015 level—when the Liberals completely swept the 32 districts of the region. 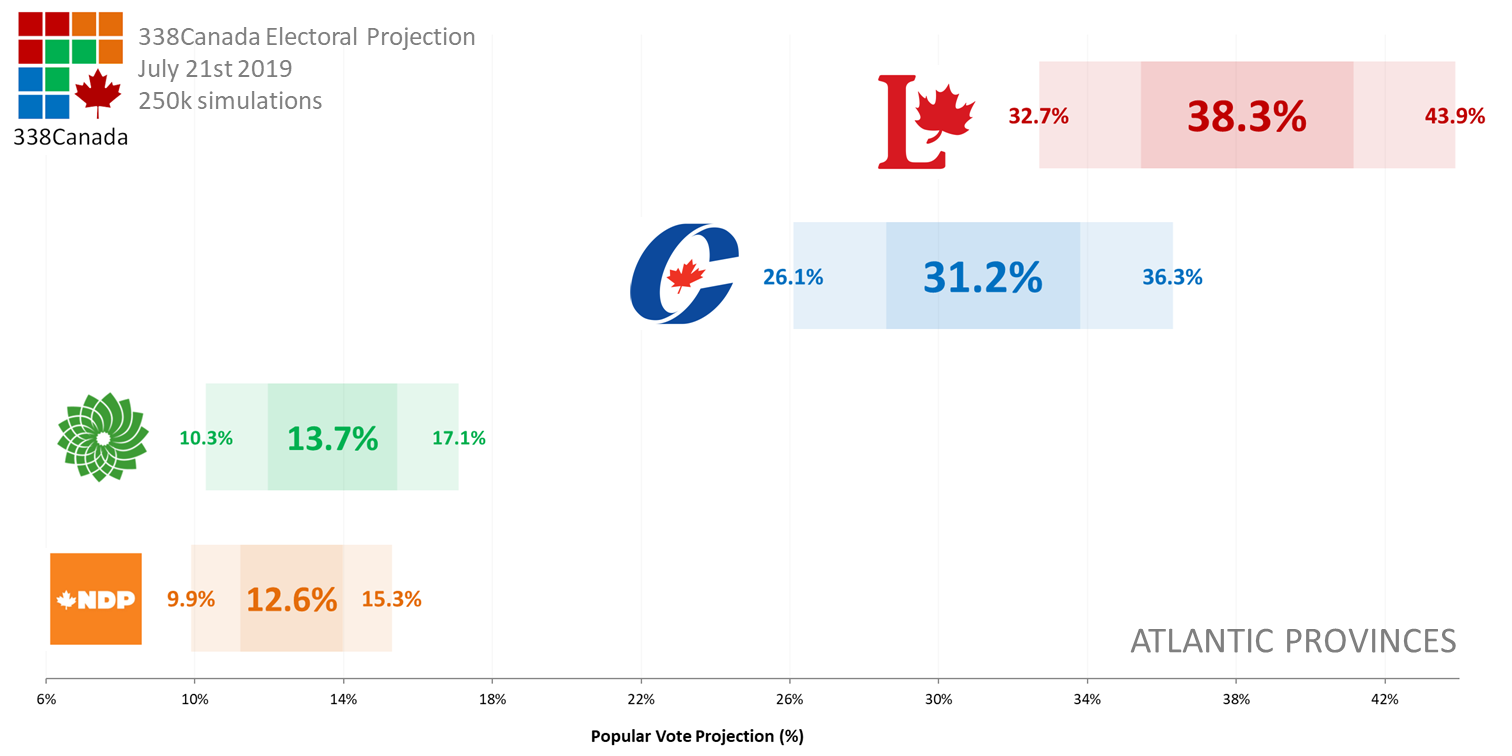 The seat projection still gives the edge to the Liberals with an average of 22 seats, but such a result would still be a net loss of 10 seats for the LPC—and it is worth noting that the Liberals won a total of 184 seats in 2015, only 14 more seats than the threshold for a majority. 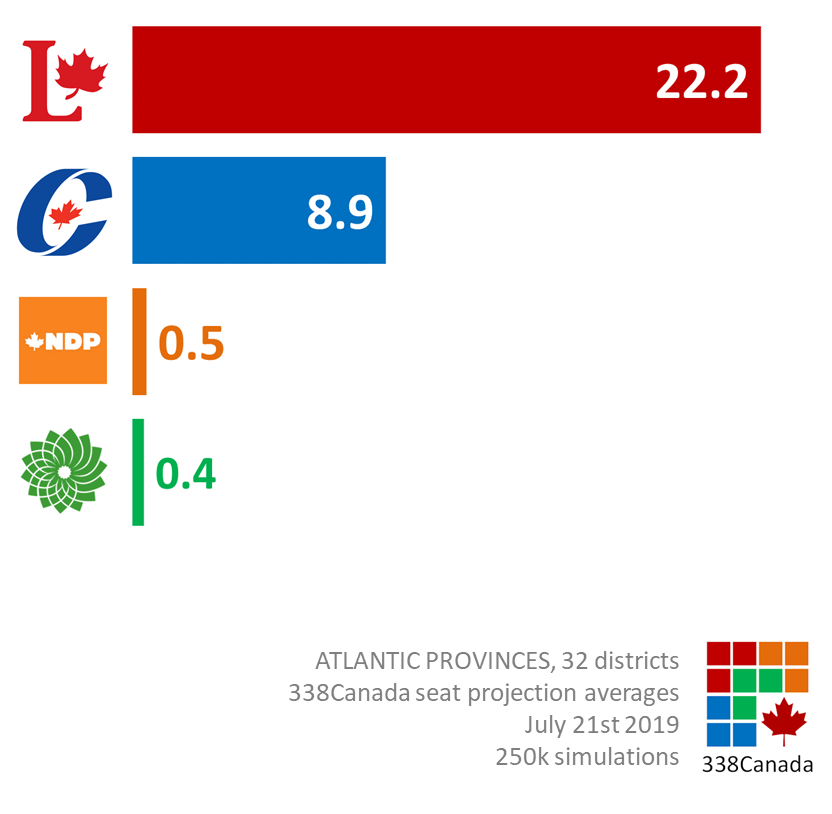 Many in Canada still hold the narrative that the Liberals dominate voting intentions in Quebec, when in fact the Liberal average is closer to one third of voting intentions (the LPC won 35 per cent of the Quebec vote in 2015). The Liberals are indeed in first place in the polling average, but their current score can hardly be described as “dominant”. 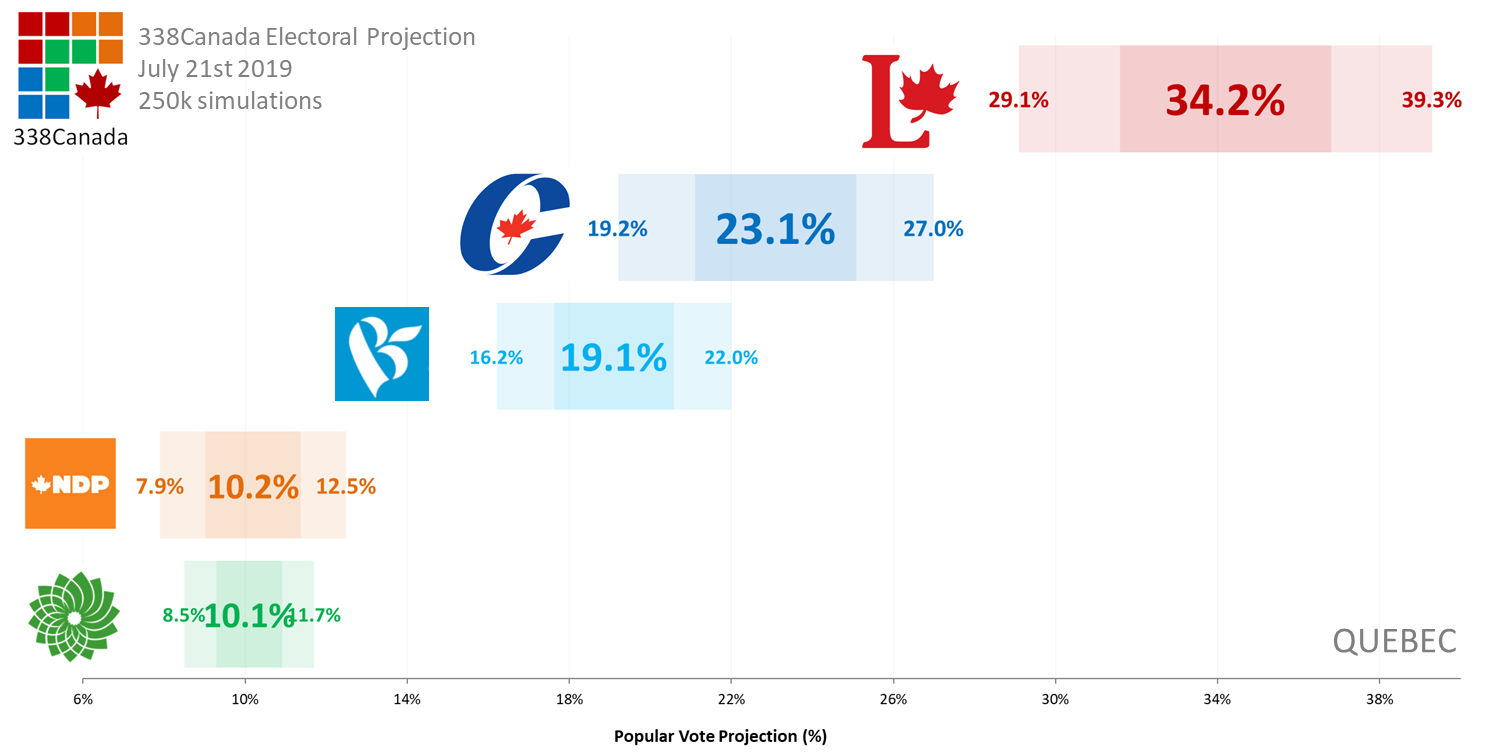 However, this splintering of the non-Liberal vote allows the LPC to run away with the seat projection in the province with an average of 47. The Conservatives and the Bloc are also projected to make modest gains compared to their 2015 result in the province. The NDP is facing a near-complete collapse in Quebec. 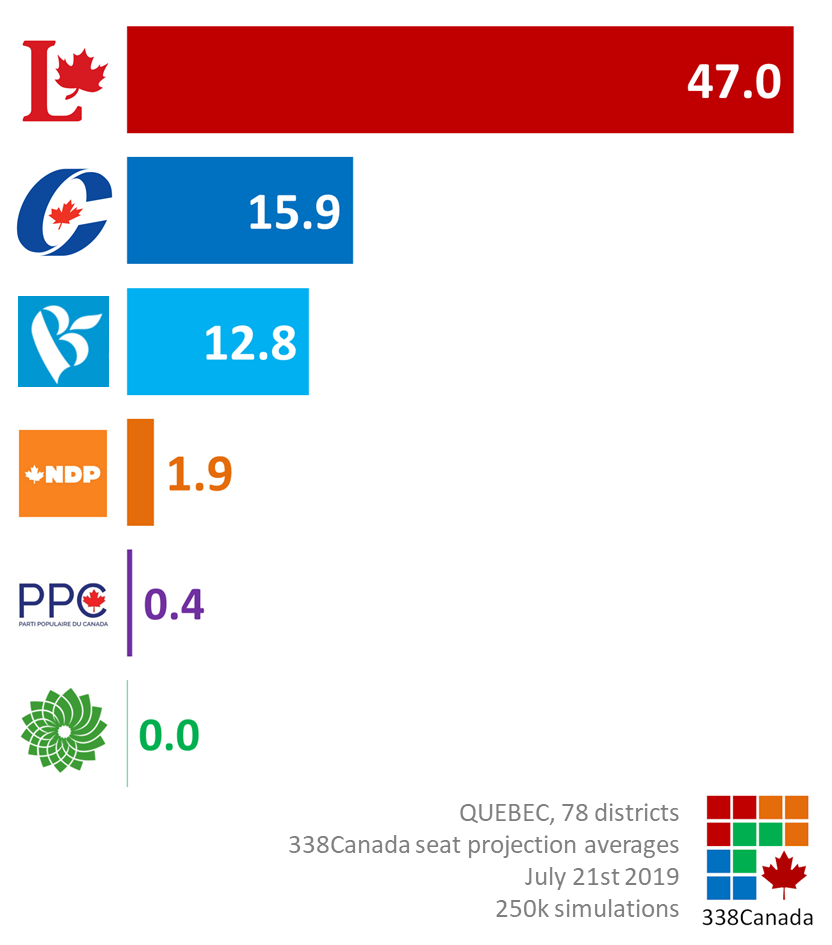 The province of Ontario received more than its fair share of attention lately, with poll numbers indicating that the Conservatives brand may be affected by Doug Ford’s troubles. Whereas many polls have shown the Liberals gaining lately in Ontario, the amplitude of this trend has not been unanimous among pollsters. 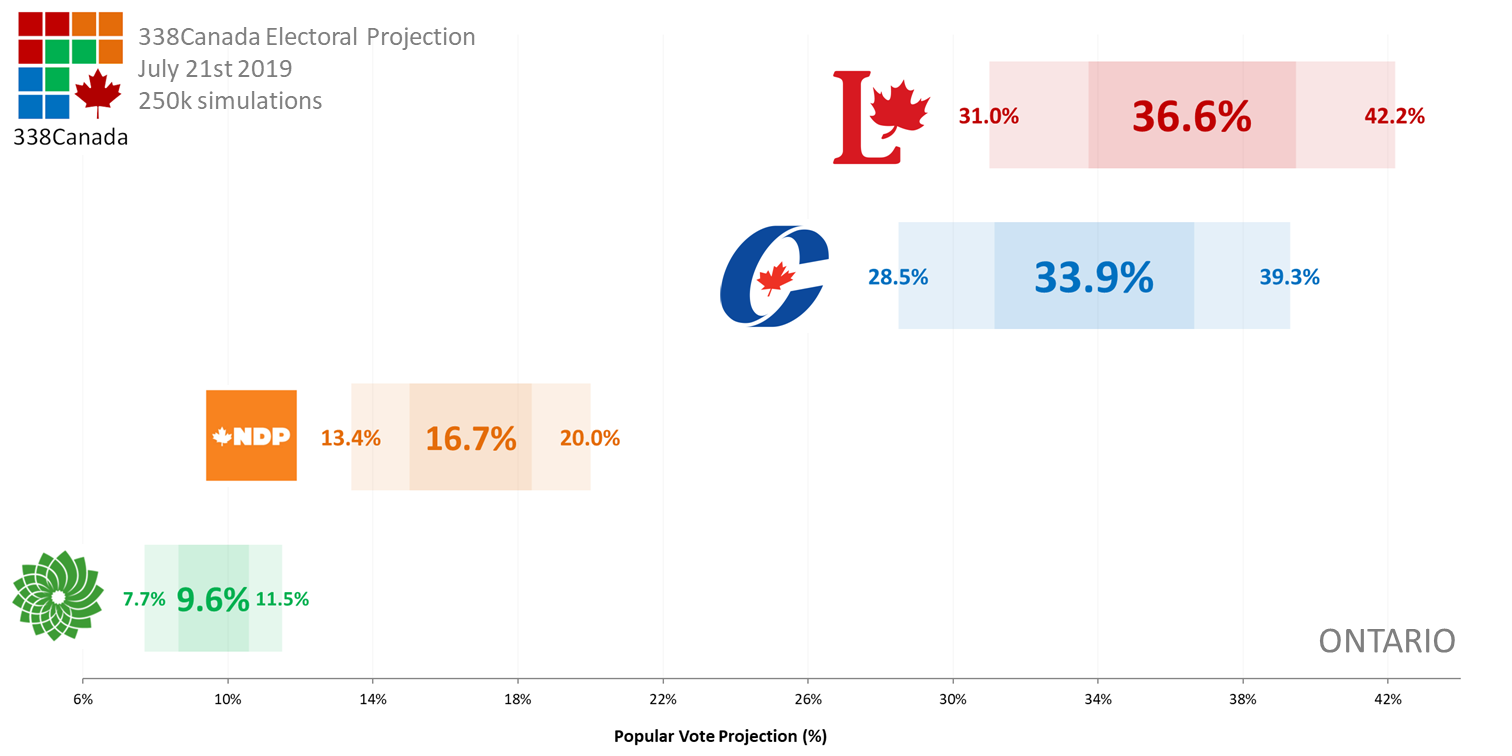 It is in Ontario where the seat projection is the most uncertain, with confidence intervals in the ±30 seats range for the Liberals and Conservatives. On average, the LPC wins 60 Ontario seats and the Conservatives, 48 seats. (In 2015, the Liberals won 80 of the province’s 121 seats. The CPC took 33.) 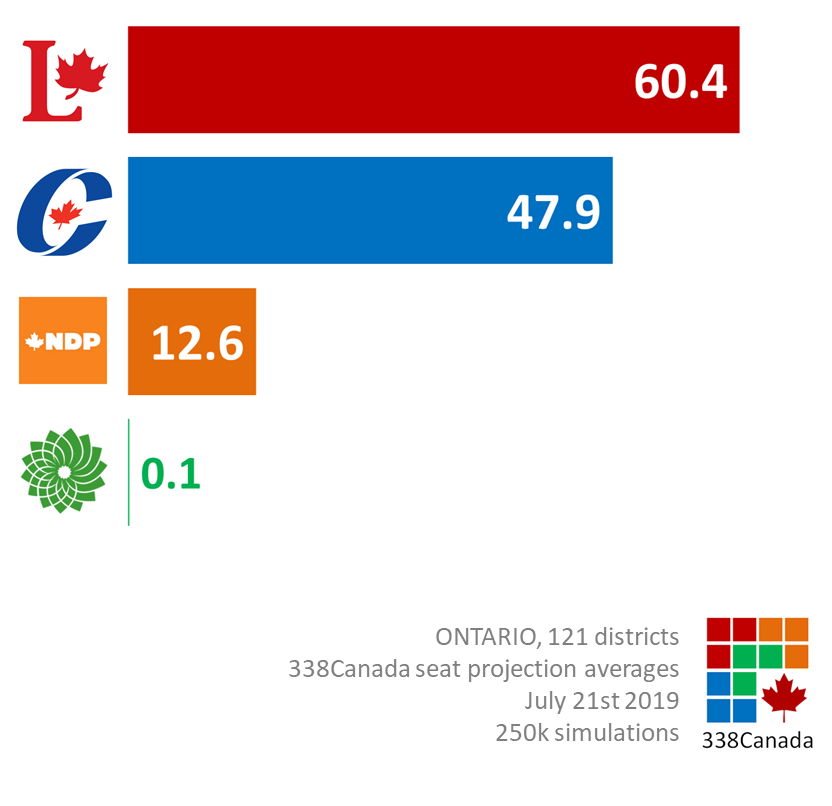 In the Prairies, the Conservatives still hold a commanding lead over their opponents. On average, the CPC has a 2/0-point lead over the Liberals. 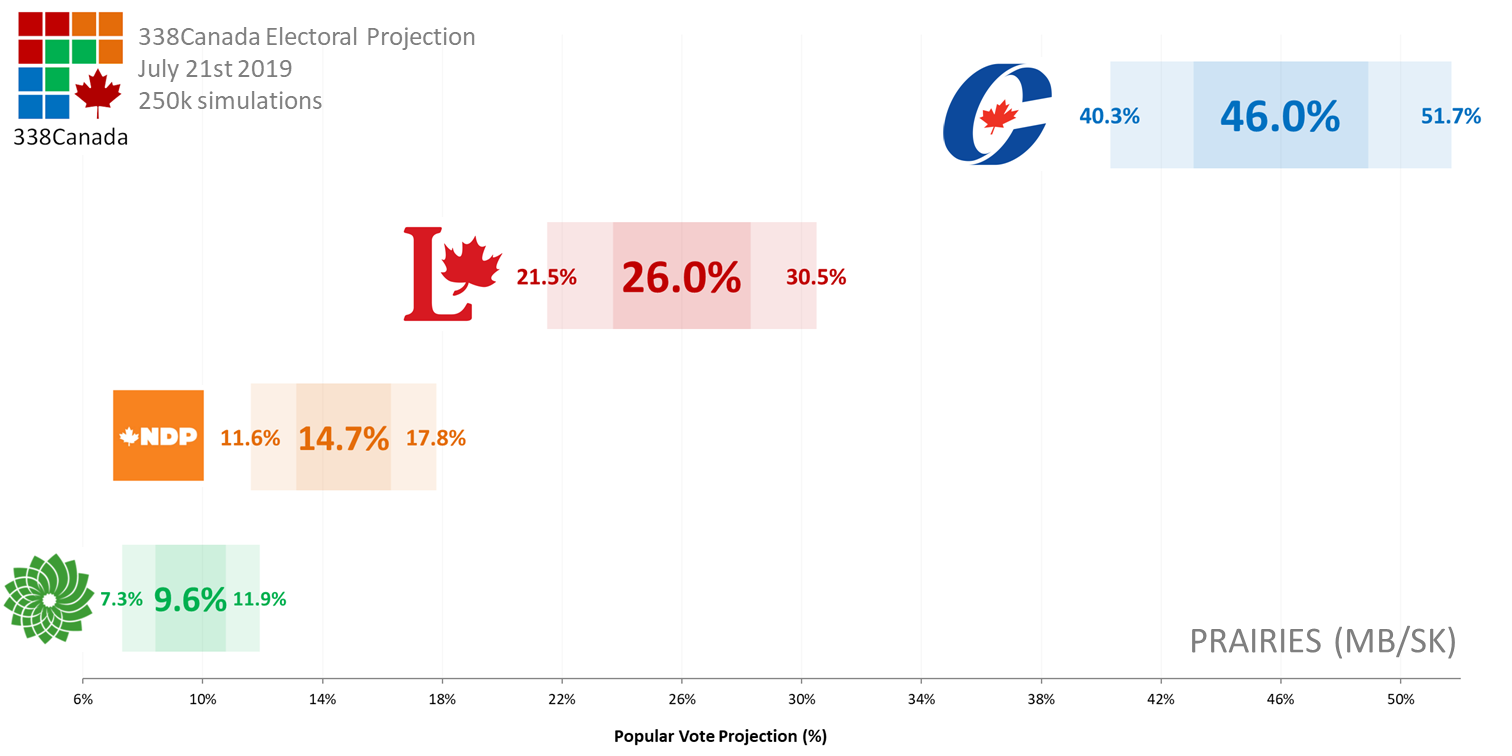 Among the region’s 28 districts, the Conservatives are favoured in every district outside of Winnipeg, Niki Ashton’s district of Churchill–Keewatinook Aski, and Ralph Goodale’s district of Regina–Wascana. 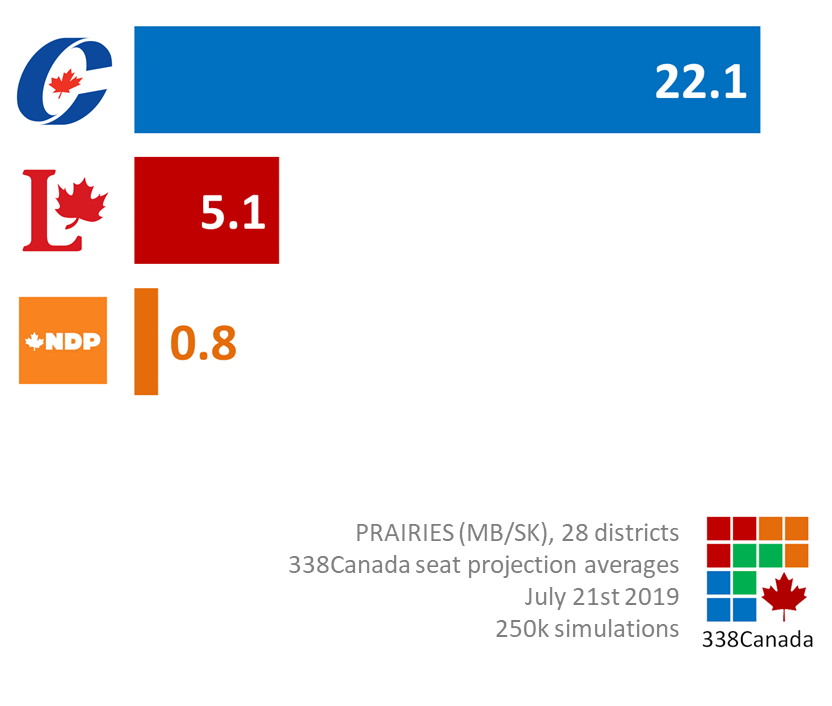 Unsurprisingly, the Conservatives dominate voting intentions in Alberta, and hold an average 40-point lead of the Liberals. 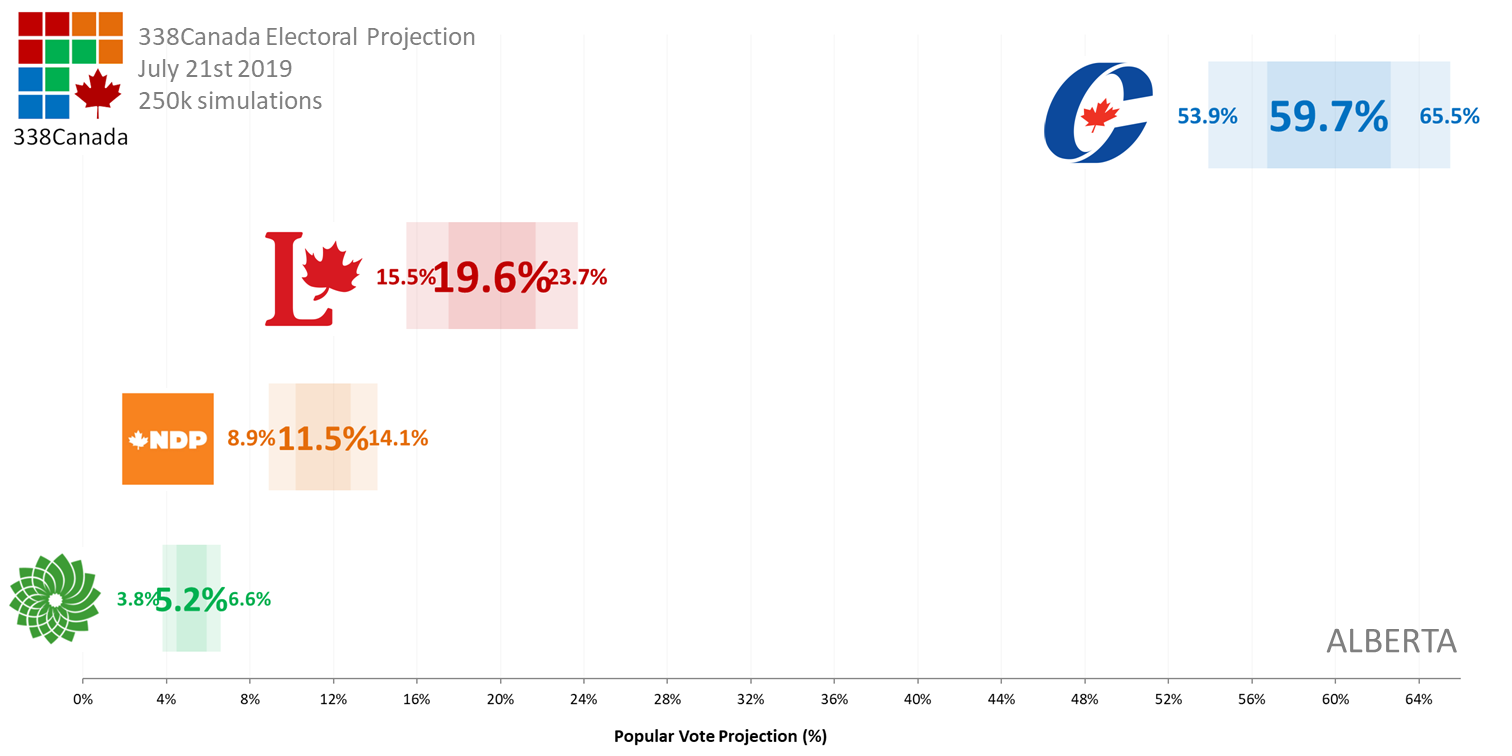 With such results in the polls, it is nearly impossible to see a scenario where the Liberals could hold on to any of their Alberta seats come October. As for the NDP, it is still projected ahead in Edmonton-Strathcona, even though current MP Linda Duncan announced last year that she would not seek re-election this fall. A complete 34-seat Conservative sweep of the province is not an implausible scenario. 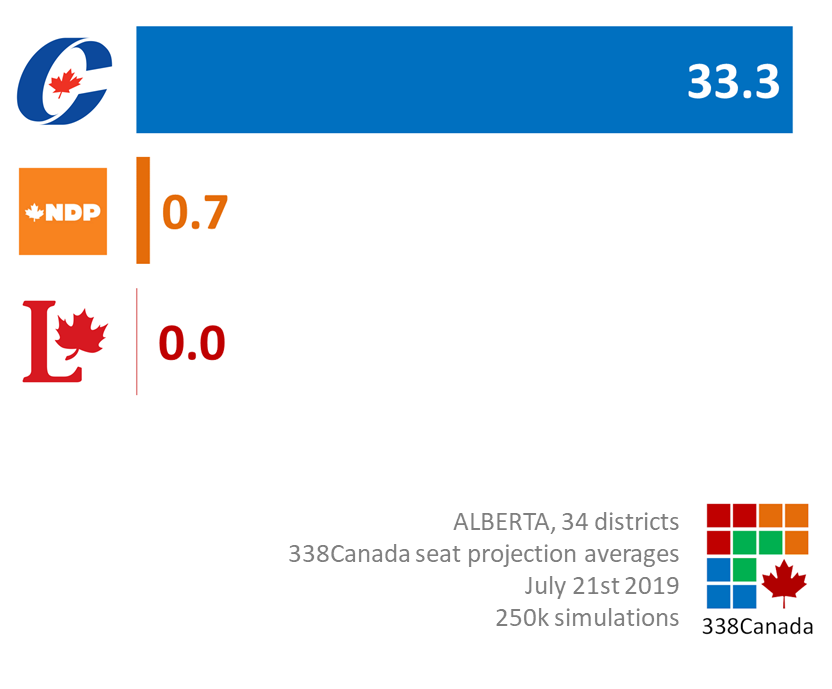 British Columbia is the province where polling numbers have swung the most since last year. Polls do not generally agree which party is ahead and by how much, and by how much support is really going towards the Greens. In the last week only, the Greens were measured as low as 10 per cent in B.C. according to Nanos, but as high as 24 and 32 per cent according to Campaign Research and EKOS, respectively. (Naturally, regional numbers are based on smaller samples, hence the higher variance between polls.) 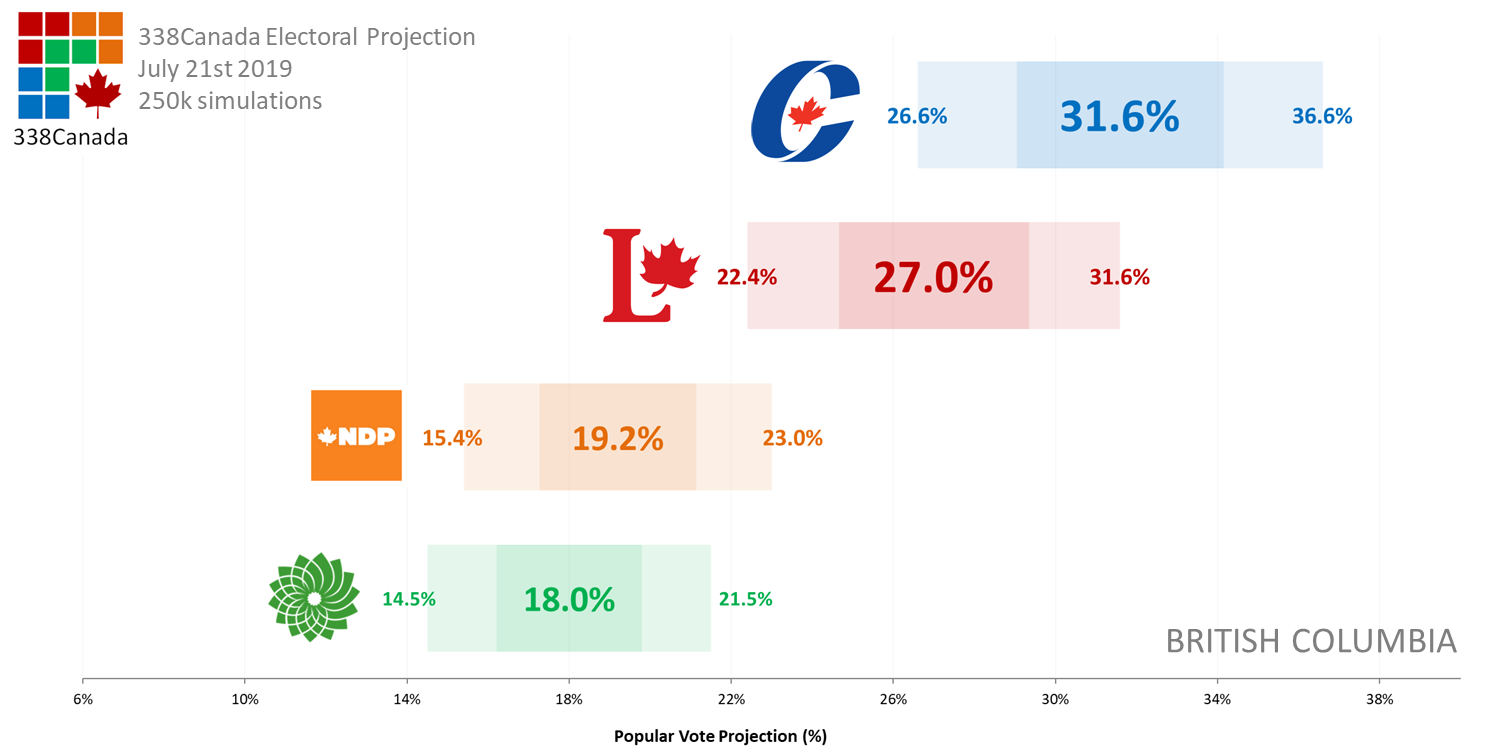 Many Vancouver seats will be battles between the Liberals and NDP. The Conservatives are leading most of B.C. rural districts. The Greens are currently projected ahead in five of seven Vancouver Island districts: 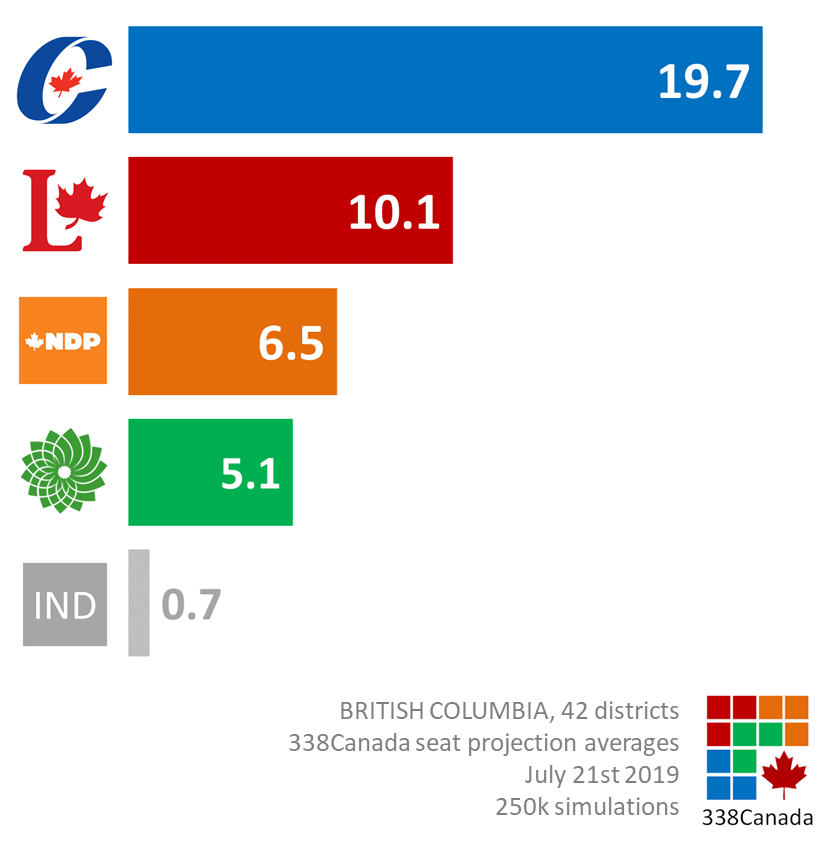 Exactly three months from today, Canadians will head to the voting booths to choose their local Members of Parliament. If an election were held today, the result would most likely (but not assuredly) lead to a minority government. While some will suggest that projecting vote shares and seats is a futile exercise that long before an election, I would argue that envisioning such hypothetical scenarios may help us understand the strategy behind every party’s campaign.

Should the Liberals win the most seats, would they be able to forge a temporary alliance with the Greens or NDP, despite the purchase of the Trans Mountain Pipeline? Would those two parties require a promise of electoral reform in exchange for their support?

If the Conservatives win the most seats, will they even be able to win the confidence of the House? Or will they have painted themselves in such a corner that the smaller parties refuse to support them in that quest? Could it be majority or bust for Andrew Scheer?

And what would the Bloc québécois do in such in situation?

So many questions, so many hypotheticals, and yet only 92 days until election day.