In the by-election race against the NDP leader, Richard Lee is scrambling to contain political damage, and gear up his own late campaign 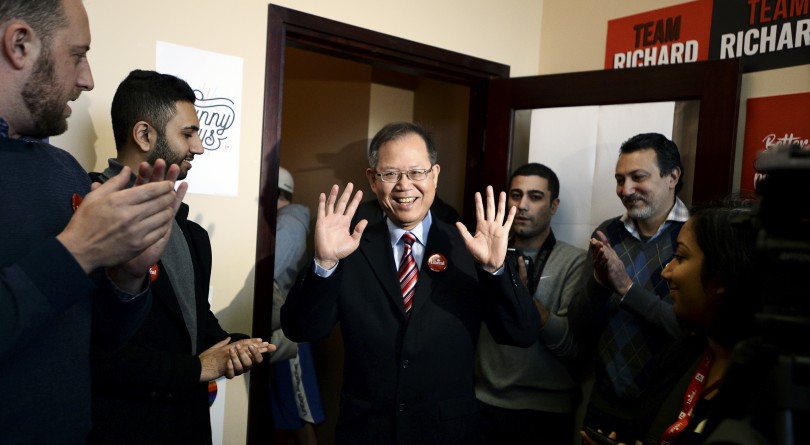 Richard Lee sets a brisk pace on a round of door-knocking in South Burnaby in late January. He’s a trim 65 and bounds up the stairs smiling to shake hands, and ask residents if he can count on their support. “That one was a potential supporter,” says the Liberal candidate, putting an optimistic spin on a non-committal exchange.

Lee is the second candidate put forward by the Liberals to run against NDP leader Jagmeet Singh in the Burnaby South by-election on Feb. 25. He is a seasoned politician who held the provincial seat of Burnaby North for four terms until 2017 when the entire city voted NDP. He enters the federal realm after a spectacular flameout by Karen Wang, the first Liberal candidate nominated in the riding. Mere weeks into the race, Wang posted an ill-considered statement raising NDP Leader Jagmeet Singh’s ethnicity on the Chinese social media platform WeChat. Wang resigned and the Liberals shut down a brief comeback bid.

Lee’s years in office afford him higher profile and better political instincts than Wang, who has never held office, ever had. His late entry has many people wondering why the Liberals didn’t try to convince him to run in the first place. Perhaps they did—there were certainly early rumours Lee, who works as a tech consultant, would be the candidate.

Lee says he considered but decided against trying for the nomination. When the by-election was called on Jan. 9, after months of delay, Lee had just returned home from a lengthy trip to Asia and felt the timing was too tight. He’s circumspect about the conversations that twisted his arm to jump in after Wang stepped down but said community leaders and supporters encouraged him to take her place. “I missed it,” he said of politics. “It was a good chance for me to be connected to people.”

Not only is he pitted against a national leader, in a riding previously held by the NDP, he’s also weeks behind and now must scramble both to contain the political damage and gear up his own campaign before the vote.

READ MORE: The real bad news in Burnaby South might be for Andrew Scheer

“Obviously this has not gone well,” says Adam Pankratz, who ran in Burnaby South for the Liberals in 2015 and came a close second. “It’s going to be much more difficult now.” Pankratz didn’t try for the nomination this time. But he said a lot of groundwork goes into a successful campaign. “Richard has been put in a difficult position of having to pick up the pieces.”

Many local Liberals believe a win is a long shot and some even think it would have been better to follow the path of the Green Party and simply leave the riding uncontested, a courtesy sometimes extended to party leaders seeking a seat. But if Lee is bothered by his chances it doesn’t show.

He delicately steers media queries about his predecessor to an exaltation of multiculturalism. Burnaby South is one of the country’s most diverse ridings—in one high school alone students speak more than 60 different languages, he notes. “Last year I started a B.C. cultural diversity association, to get the community together. In October we had a big event to honour seniors over 85 years old including European, aboriginal and Chinese.”

Lee was born in Zhongshan, China, and went to grade school in Hong Kong and Macau, before moving to Vancouver as a teenager in 1971. He speaks both Cantonese and Mandarin—an edge in a riding where at last census count the ethnic Chinese population was 38 per cent.

Lee says the Burnaby South race will be won or lost over substantive issues. “Transportation, affordability of houses, and also how to create more jobs for our young people. Those are the key areas.” He’s touting the Liberal national housing strategy and promises to do his best to deliver infrastructure dollars for social housing repair and transit projects.

His NDP opponents remind everyone they meet that the Liberals have been long on promises and short on delivery on the housing file. Peter Julian, the NDP MP for New Westminster-Burnaby is out door-knocking every day with Singh. “We have a national housing emergency and the Liberal government has done nothing about that.”

Lee must also defend the Liberals’ decision to expand and buy the Trans Mountain pipeline, which is unpopular with about half of Burnaby residents. Still, it is clear most New Democrats see Lee as the opponent to beat. Jay Shin, a corporate lawyer running for the Conservatives, is a first-time candidate who doesn’t live in Burnaby and is struggling to get his name recognized.

Raj Chouhan, a three-term NDP MLA who knows Lee well from the legislature describes him as a nice person and a safe, scandal-free politician who was not as effective as he could have been, ignoring the fact Lee did hold the role of deputy speaker. “When you do nothing, you will not have any problems,” Chouhan says.

Nonetheless, the NDP knows better than to underestimate any of their opponents, particularly when the leader’s future is at stake. The party’s national director, Melissa Bruno says: “We take nothing for granted. We’re focused on winning.”

As for Lee, if unsuccessful, he has his passion for poetry to fall back on. “After high school I sort of dropped Chinese for a while but then recently I got interested in competitions for [writing] Chinese couplets. I got a really big prize, over $1,000.”

A translation of his winning submission:

stirring dragons and lions to get up and dance;