The Liberals promised to fix the no-fly list. It's still broken. 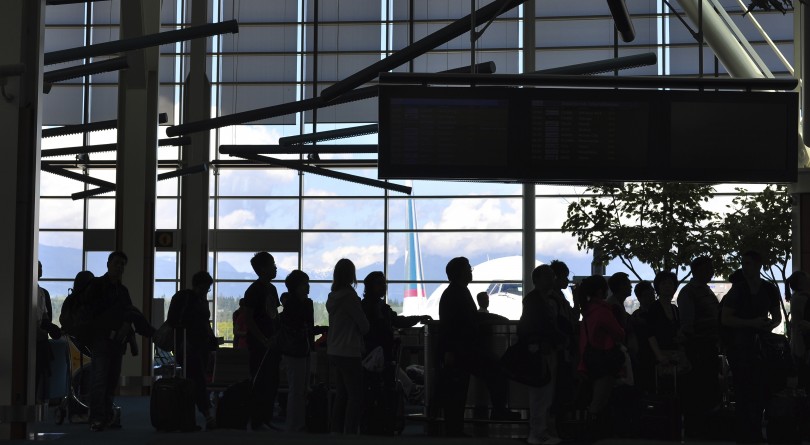 People wait to board a flight at the Vancouver airport. (Getty Images)

“We‘re hoping it won’t take another few years,” Sarah Wilson tells me over the phone.

She pauses. “Though, it might. Better than nothing, I suppose.”

That “it” for Wilson and her family is a solution to a headache that is proving downright Kafkaesque. She and hundreds of families like hers—who have loved ones who are being flagged at airports worldwide as a suspected terrorist—are caught in a bureaucratic mess that appears to sit at the intersection of intelligence failure, outdated technology, and just plain old political bumbling.

That person suspected to be a terrorist from Wilson’s family? Amin Karim, her son. He is three years old.

Amin’s name appears in the Passenger Protect Program, which is the uniquely Canadian jargon for the federal government’s controversial version of a no-fly list. It’s made up of people who it suspects have connections to terrorism or who are planning on carrying out an act of terrorism. If a person is on that list—which is farmed out to and managed by the various airlines which fly to Canada—they can be denied boarding or forced to undergo further screening.

That part is not, in and of itself, controversial. What has proven a headache for the government—and more specifically, for those affected by the program—is that the list is rife with problems.

The program, perhaps unsurprisingly, mistakenly flags people from some communities more than others: many of those affected have Arabic or Arabic-sounding names. But there are also a handful of people with Anglo-Saxon names erroneously on the list; one of them is a veteran who is worried their inclusion on the list could impact overseas deployments.

And hundreds of people, including children like Amin, have found themselves flagged at airports because, it seems, their names have wound up in the Passenger Protect Program. Often, those are false positives—where the law-abiding travellers who are being delayed, detained, and questioned just happen to share a name with someone else on the list.

Amin’s inclusion on that list is basically hereditary, in fact. Amin inherited the middle and last name of his father, who was also wrongly included on some sort of national-security watchlist, and so the three-year-old has been consistently flagged while travelling.

“We know, now, to get to airports hours ahead of time,” Wilson says. That generally means arriving at the airport three hours early for a 40-minute domestic flight. And while the minister’s office has insisted that false positives are only delayed, on average, by 15 minutes—and an earlier statement, from Transportation Minister Marc Garneau’s office, insisted the delay was just three to five minutes—those who have experienced it dispute that, saying delays can stretch into hours and that their passports are sometimes confiscated at foreign airports.

And getting on or off the list appears to be a matter of luck more than anything. Amin’s father got a Nexus card, meaning he underwent additional screening to ensure he is no threat, which ended the ordeal. When the three-year-old got a Nexus card—itself a hilarious concept—it had no effect. He is still regularly stopped while travelling, so that airline attendants can call Ottawa to ensure the toddler is not the terrorist they’ve been on the lookout for.

Well, you might say, what’s a little inconvenience for ensuring national security? The reality is that it’s hard to make firm pronouncements on what the Passenger Protect Program does and does not do, who it does and does not affect, and so on. The government has treated this program with such secrecy that, even if you’re on the list, it’s virtually impossible to confirm that you are.

Public Safety Minister Ralph Goodale’s office is still refusing to disclose how many people are on the list. When asked, his office cites nebulous “security reasons” in refusing to do so. 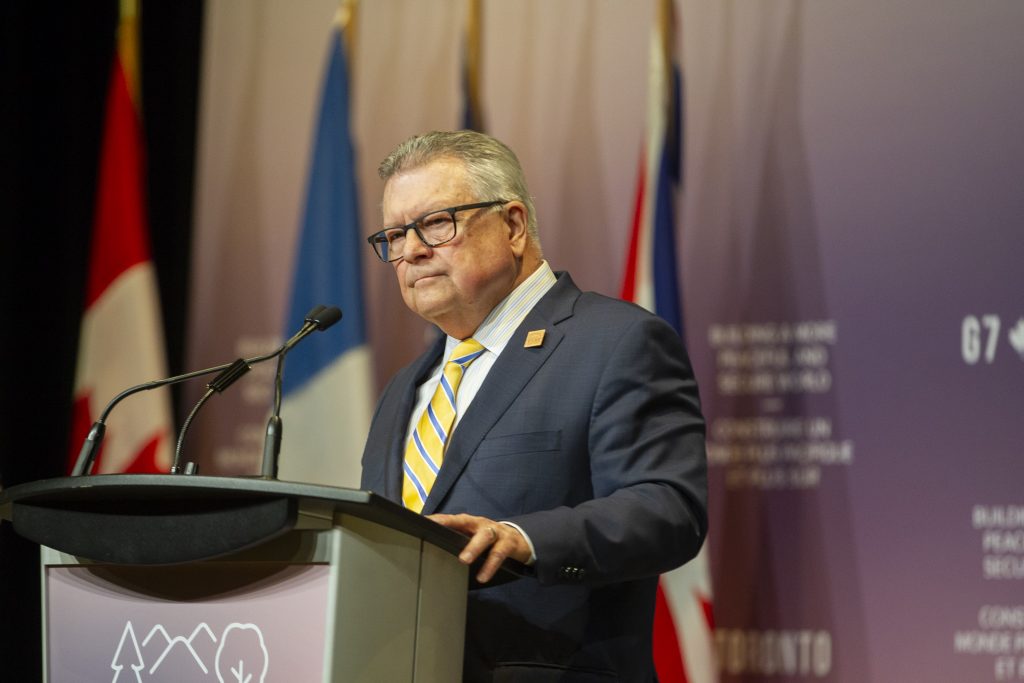 Canadian Public Safety Minister Ralph Goodale addresses the media during a press conference at the the Meeting of G7 Foreign and Security Ministers in Toronto, Ontario, April 23, 2018. (Geoff Robins/AFP/Getty Images)

The Trudeau government was supposed to fix this. In early 2016, just months after the Liberals took office, Goodale told those affected by the program that, in vowing to overhaul Canada’s national security regime, the Liberals would reform the no-fly list: “We have heard the concerns of those who have gone through additional security screening that this situation can cause confusion and feelings of stigmatization.” He promised immediate fixes to end the screening of children under 18, and to usher in changes that would fix the system for good.

To date, those fixes remain on paper.

The government’s first attempt to fix the system came by way of the Passenger Protect Inquiries office, which was set up as a more informal way to receive complaints and, ideally, help families put an end to their travel delays.* But that office has become a bit of a joke amongst those who find themselves ensnared in this fiasco; one parent laughed when I mentioned it. The office offers solutions such as obtaining an Aeroplan number in order to distinguish oneself from the suspected terrorist. And when asked directly how many cases have been resolved by the inquiries office, Goodale’s office wouldn’t say.

Under Bill C-59, which would claw back aspects of Stephen Harper’s national security legislation, the Trudeau government plans to set up a redress office intended to more seriously handle complaints by those who find themselves on the no-fly list, although the bill has yet to pass the Senate. Through last year’s budget, the government kicked in more than $80 million over four years to set it up. But there’s still no clear plan on how this office will actually fix anything. One big barrier promises to be technology: Ottawa plans to build a new database to deal with the no-fly list, one person with knowledge of the plan said, but doesn’t seem to know how it will do it.

So it’s noteworthy that, on Aug. 15, senior officials from Public Safety Canada met with a dozen people from across the country who have found themselves or their family members on the no-fly list. That meeting, held in Toronto and via conference call, was organized as an update on the next steps Ottawa plans to take to fix the faulty program.

When Maclean’s inquired about the update, Goodale’s office said bluntly that it was invite-only, and media were not invited. When media, Maclean’s included, obtained the call-in details for the teleconference, Public Safety changed the phone number at the last minute.

But those who were on the call, including Wilson, relayed cautious optimism. “We were going in knowing it was going to take some time,” she says.

Amber Cammish agrees that it was “a very good first meeting,” though she notes it came with no firm timelines. Her daughter is on the list— Alia Mohamed, one of the most popular names for girls in the Muslim world. They discovered that fact on New Year’s Day last year: while trying to get home from northern B.C., they found themselves in a rural airport, faxing a copy of their daughter’s passport to the CBSA in Vancouver.

But parents were also frustrated, quizzing officials on why, after so many years, the wait for progress had to continue. After all, the meeting discussed solutions for something that seems simple to fix—specifically, children being mistaken for those on the list—an issue that shouldn’t happen since names on Canada’s no-fly list are accompanied with a gender and a date of birth.

Beyond just the delays, though, there’s a broader concern at hand: Canada is planning on expanding and sharing its no-fly list ever more widely.

In 2016, the Trudeau government announced that Ottawa was set to share the entirety of its no-fly list with its American intelligence partners, and vice-versa. On top of that, as I reported in June, Canada is also expanding the flow of information into TUSCAN, an American-owned national security watchlist that plugs into Washington’s central intelligence database, which boasts at least 600,000 names.

But even the United States, with one of the world’s most impressive and expansive national security regimes, has a massive problem with data accuracy. Its no-fly list frequently catches innocent Americans who share a name with a suspected terrorist, or who have been flagged on incredibly weak grounds. And the database that feeds into TUSCAN, according to previous audits and leaks, is rife with mistakes.

And therein lies one of the biggest problems with these national security lists: They are almost always secret, and are rarely reviewable outside government. To actually be added to the no-fly list, or TUSCAN, or any other list, you need to be nominated by a government agency—in Canada, that could be the RCMP, CSIS, or even Transport Canada—and that nomination must be reviewed by an internal review group. If you are actually added to the Passenger Protect Program, Public Safety says they will send you a letter informing you as such. That notification process doesn’t seem to apply to TUSCAN. But if you just happen to share some basic information with your name doppelgänger, you may never truly know why you’re being stopped, questioned, or detained. Whether it’s a mistake or not, this list isn’t reviewable by the legal system or, really, anyone else, other than the government.*

At the end of the day, our government need to grapple with the very idea of populating, sharing, and using these lists. They are infinitely fallible, and all-too-often hard to fix—as the parents of kids that the Canadian government continues to confuse with terrorists know too well.

It’s not lost on those parents that the Canadian government has forged ahead with incredible speed and very little transparency, having announced their ambitious plans to disclose information to its foreign partners—but it has taken more than three years to adopt a formal process to allow innocent people to ensure they’re not swept up in the surveillance regime.

But fundamentally, many of these families just want this growing problem fixed. The group of parents who have organized to pressure the government to fix the no-fly list are constantly hearing from more families impacted by the false positives.

“So many more people are actually coming forward,” says Cammish.

“Absolutely the list is going to continue to grow.”

CORRECTION, Aug. 16, 2018: An earlier version of this story read that the Passenger Protect Inquiries Office was able to help travellers get their names off the list. In fact, the office does not have that power. Additionally, we’ve clarified details related to notifications, or lack thereof, sent to Canadians added to the no-fly list.