The Liberals review Andrew Scheer's climate plan. Spoiler: They don't like it.

Paul Wells: Ministers have been eagerly pre-butting Scheer's credibility. Not that their own party has much to brag about. 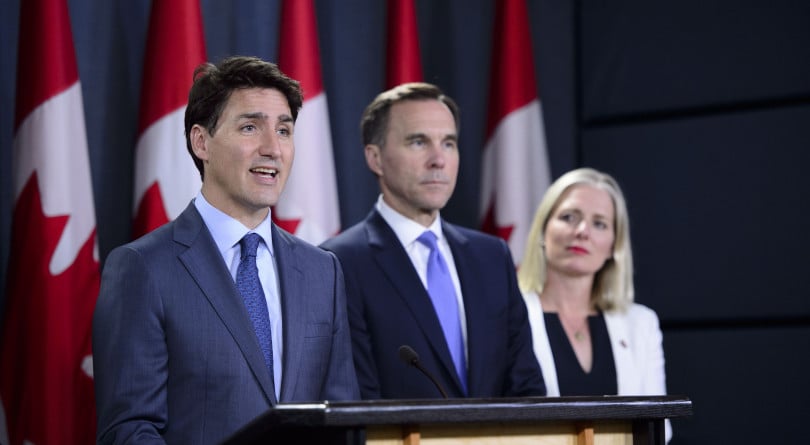 Trudeau makes an announcement about the Trans Mountain Expansion Project with McKenna and Minister of Finance Bill Morneau, in Ottawa on June 18, 2019. (THE CANADIAN PRESS/Sean Kilpatrick)

Jonathan Wilkinson is the minister of fisheries! Who knew?

“Bonjour tout le monde. Hello, everybody,” Wilkinson told reporters on Monday in the cramped foyer of the strange temporary House of Commons. (I wasn’t there. We get transcripts.)

“This week, the Conservative Party will bring forward a climate plan that will attempt to mask what Conservative politicians in Canada always do,” Wilkinson said. “They ignore the problem. They question or reject science and they make harmful cuts just like Stephen Harper did and just like Doug Ford is doing now.”

Canadians want a government with a climate plan, Wilkinson said. “So Andrew Scheer will want Canadians to think he has a plan and Mr. Scheer will hope that Canadians don’t look at the details.” Scheer is “aiming for a return of the failed Conservative policies of the past written by oil lobbyists.”

Mélanie Joly, who’s the minister of—anyone?—tourism, was on hand to give an approximate French version of Wilkinson’s remarks. The ministers’ statements would be sent by email within 20 minutes to reporters by the Liberal Research Bureau, in case anyone missed them. And this pre-buttal of Andrew Scheer’s big climate policy speech, scheduled for Wednesday, was in most respects similar to an op-ed Catherine McKenna, who actually is the environment minister, had published in the National Observer last Friday.

READ MORE: Scheer sets a date for his ‘real plan’ on climate change

“While the rest of the world is taking more action to battle this climate crisis, Canada’s Conservatives want to go in exactly the opposite direction,” McKenna wrote. She, too, is concerned about oil lobbyists: “The Conservatives have become captive to oil lobbyists. Mr. Scheer and his campaign director (a founder of right-wing Rebel Media) met this spring with a handful of oil lobbyists in a luxury resort in the Alberta foothills, to plan the federal party’s campaign together.”

McKenna, too, reminded readers that Scheer could turn out to be like Jason Kenney, Stephen Harper and Doug Ford, and warned that “a Conservative victory this fall would see Canada join the ranks of other climate free-riders—too blindly self-interested to carry our share of the load, while too blindly ideological to recognize the trillion-dollar opportunity the clean energy transition represents.”

Taken together, the three-minister broadside at Scheer was impressive. He must be flattered by the attention. Surely there’s not much danger any more that voters who want urgent action on the climate emergency (so designated by the House of Commons in a vote, Conservatives and Max Bernier dissenting) will vote Conservative by accident.

Wednesday will be a tricky day for the Conservative leader. At best he can fight any debate on climate change to a public-opinion draw. As a general rule, feelings about climate change are a problem for the Conservatives, although specific measures designed to slow its pace can be way less popular than the general sentiment. Here’s a new poll supporting both sides of that see-saw.

Scheer’s so-called keynote speeches, broad hints (very broad) (really just hints) at the policies he’ll run on this fall, have so far been on issues any Conservative leader would relish debating: the economy, foreign policy, immigration, and “confederation” (every federal leader always accuses the others of doing federalism wrong). Here they all are for your enjoyment. He’s saved climate for last, and it really is the skunk at the garden party.

Conservatism in Canada is so closely associated with the resource-producing regions—they’re not synonymous, but the Venn overlap is considerable—that you rarely see a Canadian equivalent of some big-city U.S. Republicans calling for carbon pricing. Mike Chong tried in the 2017 Conservative leadership race, and the extent to which his presence was barely tolerated at leadership debates was amazing to behold.

The Liberal ministers were on solid ground pre-butting Scheer’s credibility. Perhaps they were surprised, then, to find reporters questioning their own credibility. “Do you think you have the credibility to do this when your plan won’t even hit the targets?” one reporter asked.

Why, sure we do, Joly said gamely, because “we’ve come up with very concrete solutions” like progressively eliminating single-use plastic. Look, I don’t make the lines up, I just pass them along. We’re convinced we’ll hit our targets, she said. A reporter replied: The Conservatives will be convinced they’ll hit their targets too. “At some point, there are convinced politicians in every party.” This did not shake Joly off her lines, and soon reporters were asking about Quebec’s religious symbols ban instead.

One could add that, if one were intent on avoiding political parties that are captive to oil lobbyists, one would have avoided voting Liberal in 2015, because the party’s national campaign co-chair until the campaign’s last days was oil lobbyist Dan Gagnier. Trudeau himself used to like meeting with oil lobbyists, though to his credit he did it in public, back in the days when he believed that “when the federal government ignores… regional distinctions, or discounts provincial and territorial perspectives, our country is weakened, not strengthened.”

McKenna’s warning about “climate free-riders” came between her announcement that the Liberals will never boost their carbon tax to levels most independent experts think it needs to reach, and her boss’s announcement that the government will indeed try to build a pipeline. No wonder the Liberal ministers seemed to relish going after Scheer: Here at last was a party that had done less serious thinking about climate policy than theirs.