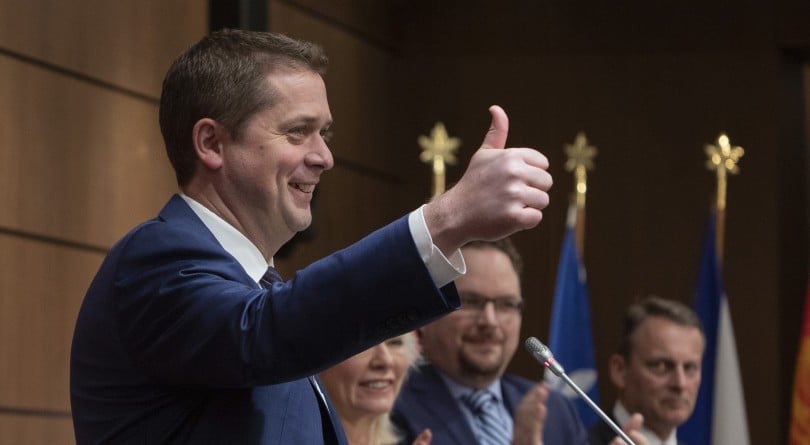 Conservative Leader Andrew Scheer gives the thumbs up as he addresses the Conservative caucus on Parliament Hill in Ottawa on Sunday, Jan. 27, 2019. (Fred Chartrand/CP)

No Canadian James Comeys! It’s the age of election tampering, when online skullduggery by shadowy foreign manipulators is assumed to be a clear and present danger to democracies everywhere. The Canadian government’s answer was revealed yesterday: five top bureaucrats will assess any bad business of that sort, and decide whether or not to go public in the heat of a federal campaign. The idea is to make sure no Canadian investigator ends up in the tight spot James Comey found himself in during the 2016 U.S. presidential campaign, when the then-FBI director decided not to go public with evidence of possible Russian attempts to tilt the table in Donald Trump’s favour. (Canadian Press)

Among upbeat early reviews of the plan was our Paul Wells saying it “actually looks pretty good.” (Twitter)

Those anti-foreign interference measures look ahead to the fall 2019 federal election. But, in B.C., attention is fixed on the Feb. 25 Burnaby South by-election. NDP Leader Jagmeet Singh is, of course, pinning his hopes of reviving his political fortunes on winning the riding. But Richard Lee, who stepped up as Liberal candidate after Karen Wang crashed out, is giving Singh a serious run. Lee is a known quantity: He held a Burnaby seat in the B.C. legislature for four terms until he lost in 2017. Still, despite his experience, local Liberals see him as far from a sure thing. Beyond the pressing question of Singh’s future, this race will serve as a testing ground for next fall’s national campaign themes, with superheated issues like pipelines and slow-burn concerns like housing in the mix. (Maclean’s)

Casting B.C. politics as a madhouse is a time-honoured tradition. But with Doug Ford running Ontario, it’s no longer plausible for Upper Canadians to laugh at the Left Coast’s erratic ways. While the premier’s personal label is firmly affixed to his Conservative government’s singular style, he isn’t a one-populist show. The usual journalistic strategy would be to probe the boss’s top aides. But that doesn’t quite work for Ford. Two of the key figures in his tight circle, Chris Froggatt and Kory Teneycke, aren’t even on his staff. Instead, they’ve gone into business of helping companies do business with his government. (Maclean’s)

For pent-up courtroom drama, it’s hard to beat military pride hanging in the balance. Think The Caine Mutiny or A Few Good Men. At only the pre-trial hearing stage, the proceedings against Vice-Admiral Mark Norman are already showing high-level suspense. Norman stands accused of leaking cabinet secrets having to do with a naval contract and is charged with breach of trust. Chief of Defence Staff Gen. Jonathan Vance took the stand yesterday and told of taking an early call from Prime Minister Justin Trudeau on the matter—but said he didn’t scribble any notes and doesn’t know about any other record of the conversation’s details.  (Global)

Lest anyone imagine all the national defence action is taking place in front of a judge, there’s news that the Canadian government has no choice but to pay even more to remain in the partnership of nine countries financing development of the F-35 stealth fighter jet project. Last year, it was $54 million. This year, $72 million. And this is despite the fact that Justin Trudeau Liberals ran in 2015 on a clear promise not to buy the F-35. After forming the government, the Liberals decided to keep their options open—at a price. The final decision on Canada’s next fighter jet won’t come until safely after this year’s election in 2021 or 2022. (Canadian Press)

Of course, every story these days—foreign meddling, the B.C. by-election, Ford’s sway in Ontario, wild-cards like the Norman trial, big money military procurement—is being seen around Ottawa through the lens of next fall’s election. But perhaps the clearest indicator of all that the parties are tuning up for the race is that they are also filling their tanks. New Elections Canada data shows that the Conservatives, Liberals and Greens all set records for raising money outside an election year in the fourth quarter of 2018. Only Singh’s slumped NDP fare poorly at appealing to donors. (CBC)