The one question Conservatives need to answer before they say anything

Andrew MacDougall: The Tories can only win the next election if they woo the voters who abandoned them in 2015 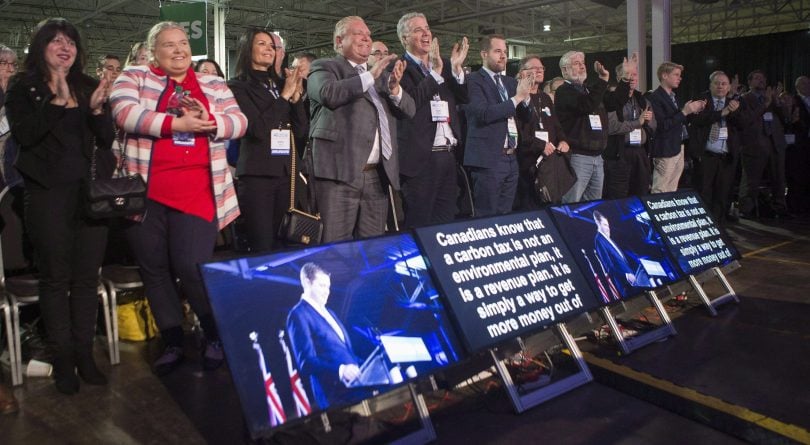 Listen up, everyone: Andrew Scheer has a plan for A Safer Canada™.

The rosy-cheeked Conservative leader is going to, among other things: end automatic bail for gang members; revoke parole for gang members; identify gangs in the Criminal Code; and impose tougher sentences for ordering gang crime. Basically, if you hate gang crime, Scheer is your man.

But chances are if you hate gang crime, Scheer was already your man. Even if it’s other crime that concerns you—from illegal border crossings to child killing—Scheer is probably already your man too. Not that it’s stopped Scheer from dropping additional planks from his #ASaferCanada plan like an over-refreshed carpenter.

Scheer’s doubling down on “tough on crime” isn’t what you’d call a bold move. There’s playing it safe and then there’s binding yourself in bubble wrap and never leaving your home, as Scheer has done. Then again, A Safer Canada™ might only be electoral foreplay; some action designed to get the blood pumping among his troops. Let’s hope so, because on its own, it certainly isn’t enough to whack Justin Trudeau out of office.

Stephen Harper won his majority in 2011 with 39.6 per cent of the vote. Trudeau turned the trick in 2015 with 39.5 per cent. With the core Conservative vote being somewhere between 25 and 30 per cent, Scheer needs to find a way to add a further 10 per cent if he wants to govern, and maybe more if the turtle known as Jagmeet Singh never flips over from his own back.

To do this, one question needs to be kept in mind every time Scheer, a Conservative MP, or the amped-up Rambos running the CPC HQ social media accounts think of opening their mouths:

Will this help us win over the voters who abandoned us in 2015?

If the answer is no, mouths should shut, weapons should be holstered and normal service should be resumed. If the answer is yes, the party should proceed, but with caution. Because even the right message can sound wrong if wrapped in snark only a die-hard partisan could love.

JEN GERSON: How to harness the volatility of the populist right

To wit, many Canadians care about the size (and length) of the deﬁcit(s)—although perhaps fewer now that Trudeau has normalized bending Canada out of fiscal shape—but banging together a cheapo website called IsItBalancedYet.ca and splashing the single word “no” on it probably isn’t enough to convince Iqbal or Nasreen Q. Public that you’re an adult ready to take charge.

Similarly, reimagining the “Twelve Days of Christmas” as Trudeau’s “Twelve Days of Failure,” as the Conservative HQ Twitter feed did in December, probably didn’t shift a single vote over the Christmas break, one of the few times families actually gather around a table to chat about politics.

Nor, for that matter, did finance critic Pierre Poilievre’s pre-Christmas Twitter blast at columnist John Ivison, who had the temerity to point out that Trudeau’s deficits would also become Scheer’s problem when the time came to draft up campaign platforms. To repeat the refrain: if people hate journalists, they already vote Conservative.

Now it could be that the Conservatives have identified a deep vein of latent support that has yet to be turned out on election days (à la “leave” voters in the U.K.’s Brexit referendum), and are throwing out red meat to lure them in, but the odds of that are slim. The modern Conservative Party of Canada built by Harper is a master at identifying its support then milking it dry. What the party needs are more (ideally not supply-managed) cows.

Another possibility is that Conservatives believe the populist wave cresting elsewhere will finally appear in Canada in 2019, and are positioning for the opportunity to hang 10 more points on their tally. The oil patch might indeed be sick to its back teeth with Trudeau but, again, they already vote Conservative. And with Maxime Bernier already vying for populist and nativist votes, any enthusiastic pursuit by Scheer is likely to make the 2015 deserters either stay with Trudeau or stay at home.

This leaves Scheer with two tasks: to can the snark on issues Conservatives already own and find a way in on the issues they don’t. Chief among these is climate change. Telling people the carbon tax sucks is fine, but most people still want to see action on climate. As Ontario Premier Doug Ford has shown, dropping a climate plank changes the conversation. Until Scheer does the same, he’ll be gifting Trudeau his favourite attack.

And boy, does Trudeau need it, because his government is killing absolutely no one with its competence. Trudeau’s Ottawa is a talk shop, not a workshop. Scheer should make competence the issue, because the people who left in 2015 certainly didn’t fault the Harper government’s ability to deliver.

Who knows? It might even appeal to some long-time Liberals concerned by their party’s unsteady stumble leftward.