The one sentence that sums up the niqab 'debate' 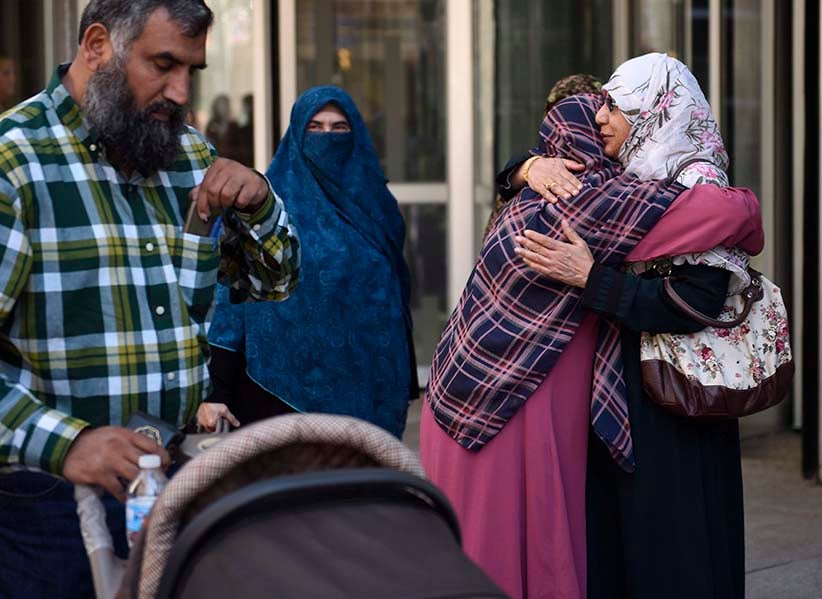 Zunera Ishaq (second from right) is embraced by her friend Nusrat Wahid after the Federal Court of Appeal overturned a ban on the wearing niqabs at citizenship ceremonies, in Ottawa on Tuesday, Sept. 15, 2015. (Justin Tang/CP)

Madam Justice Johanne Trudel was appointed to the Federal Court of Appeal in 2007 by Rob Nicholson and is said to have been one of six judges on the government’s shortlist for appointment to the Supreme Court in 2011. It is now known that Trudel likely didn’t have a chance of taking that seat on the Court—as a Federal Court judge, she, presumably, would have been disqualified on the same grounds that eventually compelled the Supreme Court to rescind Marc Nadon’s appointment—but it is surely flattering that she was deemed worthy of such consideration. And the Court of Appeal is surely a decent consolation prize.

It was from that perch that Trudel was able to leave a mark on the public debate on Monday, writing the ruling that refused the federal government’s request for a stay in the case of Zunera Ishaq, the woman who believes she has a right to wear her niqab while swearing the citizenship oath. Three weeks ago, Trudel was one of the three judges who denied the government’s appeal of a Federal Court ruling in Ishaq’s favour. That seemed to clear the way for Ishaq to swear the oath and be granted citizenship, perhaps even in time to vote in the current federal election. But the federal government quickly asked the Supreme Court to take up the case and pleaded for the Court of Appeal to suspend its ruling in the meantime.

Trudel needed 24 paragraphs to dismiss that request. Nearer the end was a sentence that could be used to summarize the whole affair. “I find,” she wrote, “that the appellant has not demonstrated that refusing his application for stay would result in irreparable harm to the public interest.”

That finding is based, in part, on the government’s own convoluted defence of its actions. What might otherwise be considered a ban on the wearing of the niqab during the citizenship oath has been presented to the court as an expression of “a desire in the strongest possible language.” So the ban is not quite a ban, insofar as citizenship judges have the discretion to allow someone to wear a niqab during the oath; despite the policy’s use of the term “must,” the government has been arguing that there is some room for a judge to decide that a woman need not remove her niqab.

Related:
Maclean’s in-depth primer on where the parties stand on the niqab

The trouble here is that the minister, Jason Kenney, in this situation, does not have the power to unilaterally fetter the discretion of citizenship judges. Thus, if the ban were said to be mandatory, the government’s case would be moot.

The Federal Court’s Justice Keith Boswell found that the policy was mandatory in nature—and also in contradiction with legislation that allows for the greatest possible religious freedom in swearing the oath—and the Federal Court of Appeal found no reason to differ with Justice Boswell on that point. But the argument that the policy is optional has now been used by Trudel to dismiss the government’s request for a stay.

“Presuming that the appellant is right that the policy at issue is not mandatory and citizenship judges can apply it or not . . . how can one raise a claim of irreparable harm?” Trudel writes—irreparable harm being the standard for a stay. “It is simply inconsistent to claim, on the one hand, that a policy has no binding effect on decision-makers, but that irreparable harm would result if that policy was to be declared unlawful on the other.”

That is, procedures already exist to ensure an oath is duly sworn.

Kenney quibbles with the wisdom of one of those procedures—the swearing of the oath in private—but the government is now 0-for-3 in its attempts to uphold his preferred option. And it has not yet even been tested by the Charter of Rights and Freedoms, the standard that would seem most difficult for this ban to meet. The Conservatives are vowing that, if they get the chance, they will pass legislation to enshrine a ban in law, at which point a Charter challenge would seem inevitable. But in the meantime, Ishaq might get herself sworn in as a citizen, which would likely render moot the government’s current appeal to the Supreme Court.

Though only officially applicable to the facts and arguments presented, Trudel’s summation that no “irreparable harm to the public interest” has been demonstrated is a fine conclusion for this entire debate. However you feel about the niqab—however you interpret it, however much you object to it—there is no harm done to us by allowing it to be worn during the swearing of a citizenship oath. The country is neither threatened nor undermined by such an act—not least because we are stronger than that, not to mention the fact that, whatever you think of the niqab, women such as Ishaq say they wear it of their own free will. And, short of such harm, the public interest would seem best served by standing up for the values of individual rights and tolerance.