The PBO will suffer under the Trudeau government's new rules 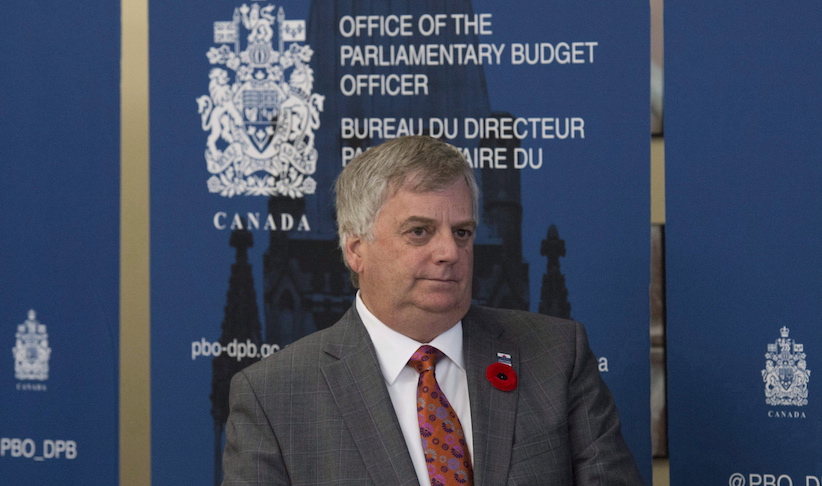 Parliamentary Budget Officer Jean-Denis Frechette is seen before speaking with the media, in Ottawa on Tuesday, November 1, 2016. THE CANADIAN PRESS/Adrian Wyld

For a decade now, the office of the Parliamentary Budget Officer (PBO), has proven to be the great economic and fiscal policy equalizer on Parliament Hill.  In that time, its reports have covered everything from its annual reporting on fiscal sustainability to the cost of Canada’s mission in Afghanistan. It quickly and repeatedly proved itself to be a thorn in the side of the government and one of the most valuable institutions for parties in opposition. It has apparently proven so effective, that the Liberal government of Justin Trudeau has decided to severely restrict the PBO’s ability to effectively serve opposition Members of Parliament in its newly released Budget Implementation Act, Bill C-44.

While the party in power in Ottawa has the Prime Minister’s Office (PMO) and the broader civil service at its disposal to analyze the fiscal implications of existing or proposed policies, the opposition parties, including the Official Opposition, typically rely on a small handful of policy generalists. These folks are often brilliant, talented researchers, but they’re so few in number and have access to such limited governmental data that they are unable to provide the opposition with research anywhere close to that available to the governing party. The introduction of the PBO by former Prime Minister Stephen Harper’s Conservative government in 2006, gave opposition members of Parliament the opportunity to access fiscal work of similar quality to that enjoyed by the federal government in a handful of prioritized cases, often of national significance.

So what exactly does Bill C-44 mean for the PBO? First, the good news. As promised, it makes the PBO an independent officer of parliament with an improved appointments process and greater protections against firings. Second, the neutral. It requires the PBO to cost party platforms if asked, which may be a problem-riddled proposition, as discussed by Jennifer Robson. However, any good that may come about from these measures is easily outweighed by the harm done by restrictions placed upon the PBO.

Bill C-44 drastically restricts the scope of work that a member of Parliament may request from the PBO. This is particularly worrying as individual member requests are the means by which the opposition is able to employ the PBO in its equalizing role. Under its existing mandate, an MP could ask the PBO to “estimate the financial cost of any proposal that relates to a matter over which Parliament has jurisdiction.” That broad mandate is what allowed MPs to request many of the most interesting PBO studies to date. The new mandate restricts this power, only allowing MP requests regarding a proposal that he or she is considering making in the House. Opposition MPs would be limited to having the PBO cost their own Private Members Bills while being unable to request a fiscal analysis of any existing government policies. As former Deputy PBO Sahir Khan noted yesterday such a restriction would have prevented the PBO from studying F-35s, Truth in Sentencing, or the cost of ships for the navy. From the F-35 fiasco to the underfunding of First Nations education, these kinds of studies matter and they regularly dominate question period and the news cycle.

A second area of substantial concern is the requirement for the PBO to submit annual work plans for approval by the speakers of the House of Commons and the Senate with the “assistance” of the chairs of the House and Senate finance committees. Under a best case scenario, this requirement would simply make the PBO a less nimble organization that may struggle to remain relevant in the media cycle. More worryingly, these work plans may, in fact, limit the independence of the PBO. These work plans will include a formalization of the process for prioritization of work tasks, which may limit the ability of the PBO to prioritize what it views to be important economic issues. This process could also be used to stifle requests from opposition members if requests from standing committees are prioritized over those from individual members.

These are the two major areas of concern in Bill C-44, although there a number of other issues that could come to the fore. For example, the requirement to delay the release of PBO reports to the public by a day only seems to be justified in that it may allow the government to jump out ahead of stories. The PBO would also now be required to study and possibly prioritize any committee request to study the estimates, which could bog the PBO down in meaningless work for months at a time if abused.

Bill C-44 has the potential to drastically restrict the effectiveness of the PBO going forward and, as a result, the ability of opposition parties to hold the government to account. And the concerns raised here and by others including current Parliamentary Budget Officer Jean-Denis Frechette and former Parliamentary Budget Officer Kevin Page aren’t legislative mistakes. Rather, these are purposeful changes intended to weaken the institution under the guise of meeting a campaign commitment to make the PBO an independent officer of parliament. The staffers in the PMO today got to see the value of the PBO when their party was in opposition and now they are seeking to limit the opposition’s ability to access this institution to hold the government to account.

These provisions should be split off from the Budget Implementation Act, significantly amended to ensure that the PBO is not weakened in the manner described above, and only be implemented with cross-party support. Otherwise, this attempt to rewrite the PBO’s mandate should not proceed.

Rob Gillezeau is an assistant professor of economics at the University of Victoria. He previously served as the chief economist in the Office of the Leader of the Official Opposition.