The organized SoCon wing looms large over the Tory leadership race. A new report suggests it would tolerate a moderate leader. 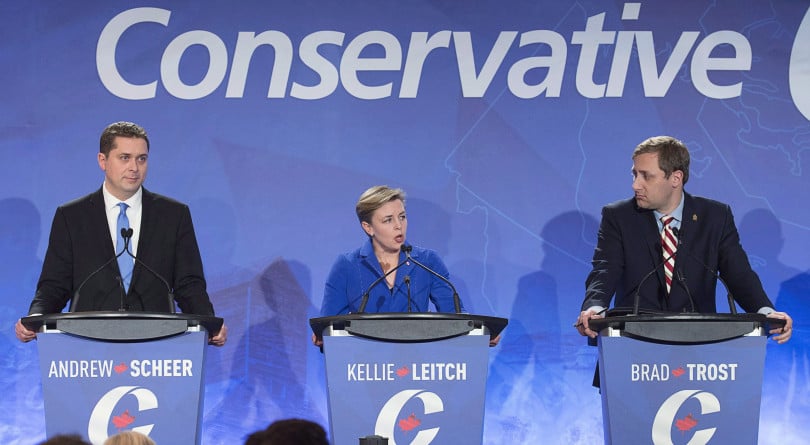 Televised political panels, almost always set up as a one-of-each-Skittles-colour partisan array, are often chippy, but it’s rare for them to descend into overt schoolyard baiting, as a recent edition of CBC’s Power & Politics did.

On the Jan. 23 show, Brad Trost—a Conservative leadership candidate from 2017 who’s chairing the campaign of fellow social conservative Richard Décarie, a former aide to Stephen Harper, in the current race—debated Kory Teneycke, Harper’s former director of communications and now a vocal advocate on how the Conservative Party of Canada should  define its immediate future course.

In an interview on CTV the day before, Décarie dismissed LGBTQ identity as “a Liberal term” and maintained that being gay is not intrinsic, but a choice people make. Trost saw no issue with this and scoffed at the idea that the comments were bigoted. “For someone like Richard, for a lot of social conservatives, your sexual orientation is not who you are, it’s what you do,” he said.

Teneycke was having none of it, arguing that Décarie should be booted from the leadership race for advancing a “nakedly bigoted viewpoint” that was unfit for a mainstream political party.

If you’re so sure Décarie is speaking from some toxic fringe, then no one will vote for him and you’ll have your proof of where the party stands, Trost taunted Teneycke. “They’re scared Richard is going to have a large number of votes, and in the end he’ll have a large influence in the race,” he said.

READ MORE: Ten things that would guarantee the new CPC leader is a winner

In an interview a couple of weeks after this exchange, Teneycke argued that Trost’s contention that Décarie should be allowed to run and members would simply rule on his views with their votes is a non-starter. No one is guaranteed the right to run for a political party or its leadership, he argued, and every election, a party disallows dozens of would-be contenders for all sorts of reasons. “If you’re saying it’s okay to run with those beliefs, you’re really giving credibility and safe harbour to that perspective and saying that’s within the bounds of acceptable political discourse within your party,” he says. “And I don’t think it is.”

Teneycke pointed out that it’s pretty easy to pinpoint the size of the socially conservative contingent of CPC members: in 2017, Trost and Pierre Lemieux, the other SoCon candidate, combined to claim almost 16 per cent of the points on the first ballot. But an “extremist” like Décarie does a disservice to those partisans and the party at large, he said.

If an explicitly anti-Semitic or racist candidate had thrown their name into the leadership ring, no one would argue they should be allowed to test the waters, Teneycke argued, and Décarie’s views are so marginal and offensive that they should be treated the same way. “So why is it okay to be homophobic and express anti-gay bigoted statements? Why is that tolerable and the others not?” he asked. “I think that’s a fundamental question the party needs to ask itself and come to terms with.”

The socially conservative constituency of the current Conservative party may be a minority slice, but it’s an organized and motivated one. Trost was their main man in the 2017 leadership race, and when he finished fourth in a crowded field of 13 candidates and dropped off the ballot, most of his supporters flocked to Andrew Scheer, putting him over the top (though barely).

And as so often happens to people who are seen as sitting conveniently astride a certain fence, after his party lost the October 2019 election, Scheer had blame shovelled onto him from both sides: many political observers said his palpable discomfort with gay rights and answering how he would deal with the issue of abortion drove away centrist voters, while social conservatives thought he’d sold them out.

With the present field still taking shape, it’s unclear who will be the SoCon standard-bearer in June’s leadership race to replace Scheer—Décarie is too obscure to go far, regardless of how members react to his views—but the party is in an odd and delicate position regardless. If it elects a leader that pleases one of the most energized contingents of its membership, it ends up with a general election albatross—a figurehead out of step with the broad electorate, and especially the suburban swing voters the CPC must woo to have any hope of returning to the governing benches.

A January report from the Angus Reid Institute found that most Canadians (70 per cent) think society should work toward greater acceptance of LGBTQ people, while 30 per cent would like more recognition of traditional families featuring a man married to a woman. A 2016 poll on the same issue found a 64/36 split, so public opinion is drifting in a progressive direction. But that breaks down very differently among supporters of different parties: in the most recent poll, it’s 86/14 for Liberal partisans and 91/9 for the NDP, but 42/58 among Conservatives, tilting in favour of more emphasis on the traditional family.

Similarly, 69 per cent of Canadians say Pride parades make the landscape more accepting for LGBTQ people, while 31 per cent say the events “reflect values and attitudes I find offensive.” Those attitudes again skew even more progressive than the national average for Liberal and NDP supporters, but the proportions flip for Tory voters, with 39 per cent in favour of Pride parades and 61 per cent taking offence.

Opinions are much more divided on abortion, with 51 per cent of Canadians saying women should have access to legal abortion any time, while 49 per cent say there should be a law prohibiting the procedure in the third trimester unless the mother’s health is at risk. Among Liberal supporters, that balance is 61/39 and among NDP voters, it’s 64/36 in favour of open access, while for CPC partisans, it’s 32/68 in favour of some restrictions.

“What it shows is that while there are social conservative voters found across the political spectrum, they are most heavily concentrated under the CPC banner,” says Shachi Kurl, executive director of the Angus Reid Institute, adding that many of them might have migrated there when the Liberals took a distinct progressive turn after 2014.

But what’s even more intriguing—and instructive for the CPC at this very moment—is what is revealed in a brand-new Angus Reid report, released Thursday and provided exclusively to Maclean’s. It finds that left-leaning voters are more likely than right-leaning to recoil at the idea of voting for a party leader whose positions on social issues diverge from their own.

The report categorizes Canadians based on the strength of their convictions about social values. The Adamant group draws a hard line against voting for a leader whose stances on issues as abortion and LGBT acceptance don’t match theirs; the Equivocals say it’s not a fatal flaw, but might make them hesitate to vote for someone; and the Ambivalent are less concerned about a leader’s social issue positions and park their vote based on other priorities.

Among Adamants, 53 per cent identify as left-leaning or very left. The Equivocals are evenly sprinkled among left (34 per cent), right (30 per cent) and centre (35 per cent), while the Ambivalents are—logically enough—mostly represented (51 per cent) by Canadians who describe themselves as “in the middle” politically.

“Notably, those who identify on the left side of the political spectrum are more than twice as likely to be in the Adamant than the Ambivalent group,” the report pointed out. And by contrast, those who tilt to the right politically are more likely to offer a shrug over these differences and belong to the Equivocal or Ambivalent clubs. So social conservatives might be less likely to vote for a more progressive leader, but it’s not a deal-breaker for many of them, Kurl explained—and their more progressive brethren are considerably more dogmatic.

That has big implications for the Tories as they head toward the leadership vote in June, in that it appears there’s room for the party to shift toward the centre without alienating its socially conservative contingent, she added. And this finding flies in the face of the dominant narrative that the SoCon element needs to be specifically mollified in the party’s choice of leader.

“I still think that the social conservative wing of the party, in terms of membership and grassroots, is very motivated and will be powerful,” Kurl said. “But it does not necessarily mean that a more moderate leader or a would-be leadership hopeful can’t make the case to say, ‘Look, guys, if we move more toward the centre, there’s still room for victory here.'”

She added, “One has to wonder if several more moderate would-be leaders jumped overboard the good ship CPC too soon.”