The Scheer climate plan: whatever

Paul Wells: I assume the Conservatives will win the votes of only the most woefully confused environmentalists in Canada, if even those. Their target market on this issue is voters who don't care. 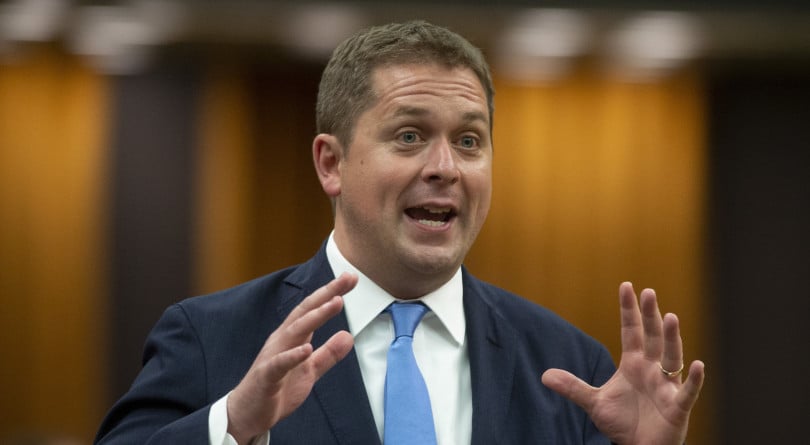 Scheer rises during Question Period in the House of Commons on June 19, 2019, in Ottawa. (Adrian Wyld/CP)

Eventually everything in Canadian politics swallows itself whole. When he ran for the Liberal leadership in 2006, Stéphane Dion didn’t like carbon taxes. This was because (a) he had a cap-and-trade plan that would achieve similar results but would be harder to understand, and Dion is a born complicator; (b) his opponent Michael Ignatieff wanted a carbon tax, and Dion is a born arguer. Eventually a delegation of Liberal MPs made a caravan to Dion and persuaded him to embrace a carbon tax, because if there’s one thing Liberals can spot, it’s a winning issue.

Fast forward, mercifully, to Wednesday, when Andrew Scheer announced that a Conservative government will find Canada’s climate salvation abroad. “Carbon emissions are a global problem,” Scheer’s plan, “A Real Plan to Protect Our Environment,” says near the end. “Canadian energy products can be used to displace dirtier foreign energy sources. The export of Canadian Clean products”—with the capital C on “clean;” apparently this will be a thing if Scheer is PM—”can displace higher emissions products. Technology produced in Canada to reduce emissions can be exported to the world.”

READ: Andrew Scheer has a problem

It’s worth noting that those four sentences are made to sprawl, in really large type, across five pages of Scheer’s document. Anyone who was once an undergraduate humanities major cannot help but notice the feats of margin-stretching and creative font selection that have produced a 61-page document from a guy who was really hoping climate change wouldn’t be on the exam. There’s 20 pages of throat-clearing and Liberal-mocking before the document gets to its first actual proposal. (Here’s that proposal: Scheer promises to “Set emissions standards for major emitters that will lower greenhouse gases and drive Canadian businesses to the highest standards of green technology.” What standards will produce that result? No answer, in any font size.)

But back to eating oneself whole. I’m old enough to remember that when Stephen Harper was first elected in 2006, the Conservatives had a high old time mocking Liberal claims that Canada could buy climate virtue on the global market. The mechanism back then was a global market in emissions credits, which was cap-and-trade on a planetary scale: If Canada needed to emit more than its share of carbon, it could buy the right to do so from more virtuous (or luckier, or smaller and easier-to-heat) countries on the global market. Harper thought that was hilarious, and the Conservative government of the day spent its first two years in office promising a “made-in-Canada plan.”

Sure, the mechanisms would be different, but the notion that Canada can buy virtue abroad is one Harper used to mock and one Scheer now embraces. But it would be churlish to demand that Scheer’s plan make too much sense, for two reasons.

First, Scheer’s goal is not to find the best plan to meet Canada’s climate targets. It’s to fill a 60-page climate position paper with everything he can think of that isn’t carbon taxes. In Everyone… But the People, an account of a 2015 Vancouver-region transit-tax referendum co-written by Scheer’s campaign manager Hamish Marshall, we find this bit of wisdom: “All good campaigns are based around two messages—an offensive or ‘sword’ message to define the election and to take down your opponent, and a defensive or ‘shield’ message to protect against any attacks thrown at you.” Climate is a shield issue for Canadian Conservatives. Scheer just wanted a pamphlet he could wave around and say, “I’ve got a Real Plan.”

Second, Scheer would hardly be the first leader to make little sense on carbon emissions. Justin Trudeau’s 2015 Liberal platform mentioned “carbon” 10 times. Six of those mentions were in reference to a federal fund that would reward virtuous behaviour. The other four mentions of a “carbon price” included not the slightest detail of timing, rate, incidence, or any other useful element of program design. In the event, the Liberals are introducing a carbon tax in their fourth year in office, designed to ramp up slowly and top out, we learn, well below the rate serious analysts say would be needed to reach Canada’s 2030 Paris targets.

Except when you can:

Canada’s clean tech industry is booming and we need to do everything we can to help our companies succeed on the world stage – pushing innovation in new & traditional sectors. My thanks to business leaders for the roundtable in Vancouver tonight. pic.twitter.com/wAsOSXgblM

I want to be clear. I take Trudeau’s Liberals, today, to be more rhetoric than action on reducing carbon emissions, but a low bar is a low bar: if nothing else, they’re at least more ambitious on reducing emissions than Scheer’s Conservatives. I assume Scheer’s Conservatives will win the votes of only the most woefully confused environmentalists in Canada, if even those. Their target market on this issue is voters who don’t care. I believe Trudeau’s Liberals were nearly mum on their plans in 2015 to hide the fact that they had plans, just as Scheer is, finally, relatively verbose on his plans this year to hide the fact that he would rather have none.

But it is hard to find a champion on this issue in Canada, and easier to understand the modest rise in support for Elizabeth May’s chronically underperforming Green Party: in a fight between Tweedledum and Tweedleworse, one starts to wish for someone who would at least talk a good game.