The Throne Speech: More will be done

Paul Wells: If the Liberals' goal was to be deliberately vague, well, the Trudeau team's speechwriters absolutely nailed it 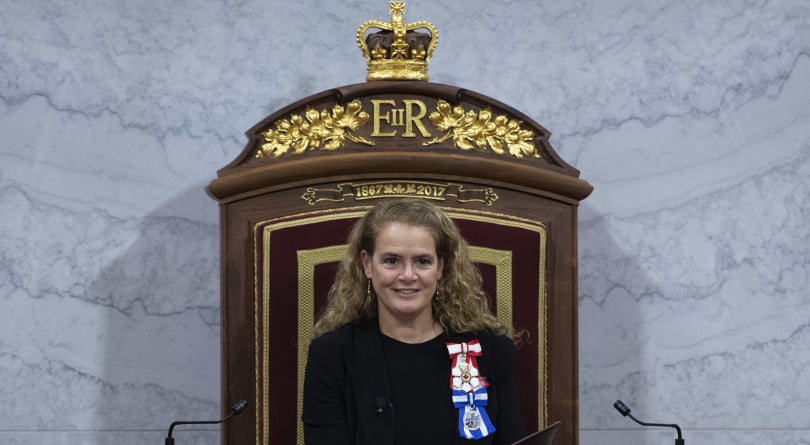 Governor General Julie Payette delivers the Speech from the Throne at the Senate in Ottawa on Dec. 5. (Photo by SEAN KILPATRICK/POOL/AFP via Getty Images)

Well, they’re back. It’s hard to fault a government for doing what it said it would. “Expect some 2,000 or so words, with deliberately vague language,” Toronto Star columnist Susan Delacourt wrote at the beginning of the week. So I did. And I was not disappointed.

Shorn of the opening musings from governor-general Julie Payette, written by her or her staff and blandly evocative of the twin perfect vacuums of space and cliché, the speech was about 2,400 words long. These things are a matter of fashion, and short speeches are the rage. Jason Kenney just handed one to Alberta’s lieutenant governor. Short speeches seem vigorous. And if the goal was to be deliberately vague, well, the Trudeau team’s speechwriters absolutely nailed it.

“To ensure fairness for all in the new digital space, the Government will review the rules currently in place,” the speech said. And…find them good? Abandon them? Guess we’ll see. Also: “Municipalities and communities that want to ban handguns will be able to do so.” And: On trade, the government will “seek out opportunities.” In foreign relations, it will “build partnerships” with “like-minded countries.” On opioids, “more needs to be done,” and “more will be done.” I’d like to see more. I was happy to see more mentioned. I hope it’s an effective more. Guess we’ll see.

Nothing here would surprise anyone who’s read the Liberals’ election platform. Turns out they meant what they promised and they aim to implement it. If we’re to read anything into prominence, it seems significant that “fighting climate change” was mentioned first among the speech’s five priority areas (the others being “strengthening the middle class,” “walking the road of reconciliation,” “keeping Canadians safe and healthy” and “positioning Canada for success in an uncertain world”).

No Canadian federal government has ever met carbon-emission targets set by itself or its predecessor. This throne speech seems an elaborate exercise in escaping that familiar fate by throwing the government’s hat over the wall so it will have to climb after it. “Canada’s children”—anyone else?— “and grandchildren will judge this generation” by its action or inaction on “the defining challenge of the time.”

(The language sounded familiar, and indeed here it is in Gerald Butts’s resignation letter: “Our kids and grandkids will judge us on one issue above all others. That issue is climate change.”)

How will it meet the defining challenge of the time? Vaguely at first. “Make energy efficient homes more affordable.” “Make it easier” to “choose” zero-emission vehicles. “Work with businesses to make Canada the best place to start and grow a clean technology company.” These aren’t the droids you’re looking for.

I’m not vexed, yet, by the lack of detail or the, I suspect, accidental echo of the departed but still influential Butts. A throne speech, especially one so resolutely pithy its modest length was the subject of advance billing, is not a blueprint. It simply proclaims, This is the sort of government we plan to be. This one plans to hit challenging targets in 2030 and to line up harder targets every five years through 2050. But what about the oil sands? Fear not: the government “will also work just as hard to get Canadian resources to new markets” and offer “unwavering support” to anyone whose resource-sector job has left them in hard times.

You might think there are tradeoffs and contradictions in all this. The government is acknowledging, for the moment, no such thing. And the perils of a minority government? The Greens and NDP are against that resources-to-markets stuff, if it means expanding Trans Mountain, and the Conservatives don’t like the carbon tax. Is Trudeau simply defying them to bring him down if they don’t like his work?

Basically, sure he is. This is all any government can do. The Liberals had a platform; they didn’t get elected to implement anyone else’s. Confidence votes on the key elements of that platform will inevitably be games of chicken. For now, chickens won’t be in short supply: everyone’s exhausted, the NDP is at half strength and lower budget, the Greens have a leadership contest to organize, and the Conservatives… well. This Liberal government will get to be a Liberal government for a while. Details to follow.

FILED UNDER: Editor's Picks Speech from the Throne