The Trudeau Liberals' fast one on equalization: Not so fast 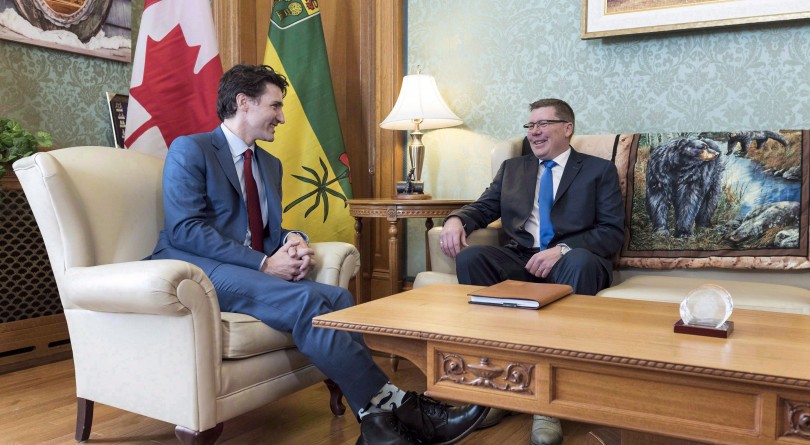 Jason Kenney is not pleased.

“Justin Trudeau just pulled a fast one on Alberta on equalization,” the Alberta opposition leader says in an online video he posted late Thursday. “The federal government has just let it slip that they’ve already decided to extend the current unfair equalization formula for another five years.” By Friday morning he was calling it a “slap in the face to Alberta.”

What happened in between, setting off Moe and Kenney, was this story in the Globe saying the feds have already extended the equalization formula through 2024, that they say they announced it in the budget, and that the extension is part of the budget implementation bill whose passage this week marked the official beginning of parliamentary summer.

Scott Moe to the Globe: “That would be news to me.”

It was also news to Trevor Tombe, a University of Calgary economist who keeps a very close eye on the federal transfer-payment system and on the resource economy—precisely the sort of person, in other words, who you’d have expected to see this coming. He was amazed on Thursday when Kelly Cryderman’s story came out. He’s written a piece for the CBC calling Justin Trudeau’s and Bill Morneau’s willingness to impose this continuation on provinces without “real consultation” “troubling.”

There’s so much claptrap in discussions of these things that it’s hard to know where to begin. First, equalization: A federal program, paid from federal revenues, that pays large amounts of money to provinces whose ability to raise revenues is below a national threshold. It’s famously complex. There’s all kinds of room to suggest improvements or to decry the whole scheme.

Second: The governments of Saskatchewan and Alberta, and Kenney’s Alberta opposition even more than the government there, have been complaining that it’s unfair that those provinces “pay into” (it would be more accurate to say they don’t receive) equalization even though slumping resource prices have caused economic havoc there. And everybody likes to point out that Quebec is the largest recipient in equalization dollars, which makes the whole thing sound like a sinister scheme. (In fact, Quebec receives fewer equalization dollars per inhabitant than most recipient provinces. It’s just got a bigger population, so it sums to a large number.)

Third: The unfair equalization system Kenney dislikes was set, in its latest five-year incarnation, by the federal government of Stephen Harper, I hope after discussion with ministers including his Alberta star, Jason Kenney. This doesn’t relieve Kenney of his right to complain now, but I’m damned if I’m going to resist pointing it out.

Fourth: Scott Moe’s proposed improvement to equalization is silly. Cut the program in half, and distribute half to the provinces on a per-capita basis? That means it… stops being equalization. The largest net effect of Moe’s proposed changes, as Tombe has pointed out, would be to reduce payments to Quebec (Saskatchewan and Alberta readers: Yay!) and increase payments to Ontario (Saskatchewan and Alberta readers: Huh?). Meanwhile there are other transfer programs, including the main health transfer, which are distributed per capita already.

But if we tried to forbid governments from making odd or self-interested arguments, it’s hard to know where we’d stop in this country. Saskatchewan and Alberta have every right to propose changes. So it’s surprising to hear, just as those provinces thought they were beginning to make their cases, that Trudeau and Morneau and, through its budget vote, the whole Parliament of Canada have declared the whole conversation already over.

Either the feds have pulled a fast one that’s horrendous even by the fabulously lax standards of federal governments rigging the transfer system (here’s a fun walk down memory lane)—or Scott Moe really needs to fire whoever was supposed to keep him briefed on changes in the transfer system.

When I came to work this morning, I had no idea which of the two it was. I was inclined to believe it’s Morneau’s fault. But Morneau’s office has coughed up a paper trail that complicates matters a bit. I’ll show you what they showed me and you can judge.

Federal budgets, increasingly since the late Chrétien years and almost completely since the late Harper years, are close to useless as an expression of the federal government’s spending plans. They are marketing documents, and if I paid you to read this year’s budget for clues to Bill Morneau’s plans for equalization, I doubt you’d have spotted the margin note in a table of numbers on page 319 that gives the game away.

The title of the table is “Other Budget 2018 Measures (Not Included in Previous Chapters)”—I mean, come on—and it lists 30 items that are worth millions of dollars each but that didn’t rate a mention in the previous 318 pages. Here’s what the note on page 319 says:

“Proposed renewal of Equalization and Territorial Formula Financing (TFF) for a five-year period beginning April 1, 2019, with technical changes to improve the accuracy and efficiency of the calculation of entitlements and proposed transition payments of $1.3 million to Yukon and $1.7 million to the Northwest Territories from 2019–20 until 2023–24 to offset projected negative impacts of the changes on TFF entitlements over the course of the renewal period. The Government intends to introduce legislation to implement the transfer renewal and transition payments to the territories. Technical changes will be implemented through regulatory amendments.”

TFF is equalization for the northern territories, and it’s peanuts. The paragraph artfully mentions equalization for the provinces, then includes several lines of detail about a program that doesn’t affect provinces, then closes with “intends to introduce legislation.” I’m not certain that would be enough to shake off teams of bloodhounds, but it’d be a pretty good bet.

Ah, but the changes (or lack of changes) were mentioned in the budget implementation act, which turns budget measures into law! And indeed they were. This year that particular bill, C-74, was 556 pages long, which is only two pages shorter than the Stephen King novel The Tommyknockers. But don’t call it an omnibus. Here’s what the bill said in paragraph 39 of its summary:

Division 3 of Part 6 amends the Federal-Provincial Fiscal Arrangements Act to renew Fiscal Equalization Payments to the provinces and Territorial Formula Financing Payments to the territories for a five-year period beginning on April 1,2019 and ending on March 31, 2024…

This is clearer. As long as you read at least 40 paragraphs of the summary of any given bill, you’d have spotted this.

But there’s more. Morneau’s office sent me this letter from Morneau to his Saskatchewan counterpart, Donna Harpauer, from March. It suggests that writing to Morneau when you’re a fellow minister of finance from a large province is eerily like asking him questions in a media scrum in Ottawa: the things you say cause him to say other things, but it takes an effort of will to classify his responses as “answers” in the conventional sense.

“In your correspondence, you raise concerns,” Morneau writes. “The issues you raise are fundamental to the functioning of the program and merit further analysis and consultation.” So… the federal government will… hurry to provide that analysis and do that consultation? Ha! Nope. “For the 2019 renewal, the federal government proposes to maintain the main program parameters,” Morneau writes. “I will be reaching out to you and the other Finance Ministers to consult on priorities for the next renewal.” That is, the one that begins in 2024.

The minister’s faith in his own permanence is striking. So is his bland assurance that he’s looking forward to hearing what they want next time, after two years of hearing what they wanted this time has led to no change. Thank you for your request. I’m pleased to announce that tomorrow you will be invited to ask again.

Still, Morneau’s March letter to Harpauer should at least have raised serious alarms in the Saskatchewan government, along with private and public demands for clarification.

All the more so when this letter arrived five weeks ago in the office of Alberta finance minister Joe Ceci. Here again the minister has raised concerns. Here again Morneau says things, closing with, “For this renewal, the government is proposing to maintain the main program parameters… The Equalization program is being renewed for the April 1, 2019 to March 31, 2024 period and renewal legislation is before the House of Commons in Bill C-74.”

And again, having rejected every concern from the Alberta minister for the next five years, the same fabulously tone-deaf invitation to keep trying: “I will be reaching out… to consult on priorities for the next renewal.” Try the ring toss. Prize every time.

Still, it’s all in there, and from five weeks ago: The fact that he planned no serious changes for the next five years; the fact that the enabling legislation is C-74, and therefore that its passage would mark the end of any possibility for amendment.

In Kenney’s video rant above, he indulges the luxury of an opposition politician: he suggests that either Ottawa made this move in secret, or that they did it in cahoots with a supine Alberta NDP government. The paper trail suggests the latter charge may have more legs.

It’s pretty obvious that Morneau did not want the renewal of equalization to become the subject of serious debate. But it’s equally obvious that he did notify concerned provinces. It’s a reminder that with the Trudeau government, you need to read the fine print. I think the Trudeau government’s level of transparency and willingness to consult on this issue falls well below the leisurely standard set by Jim Flaherty in 2011. But the provinces did have advance warning.