The WE scandal's latest fallout

Politics Insider for Sept. 10: The rise and fall of WE Charity, Erin O'Toole hosts his first caucus meeting and a Canadian judge in B.C. has a problem with mice 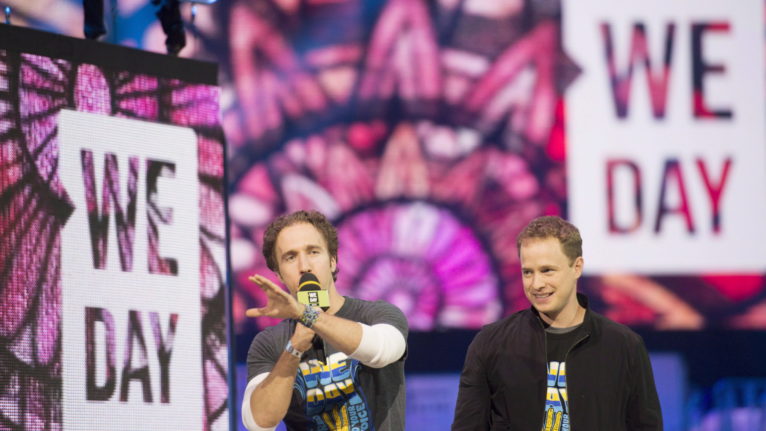 Craig Kielburger and Marc Kielburger speak during "We Day" in Toronto on Thursday, Oct. 2, 2014. (Hannah Yoon/CP)

A flurry of tweets yesterday competed for an exclusive scoop on the future of WE Charity. Soon after, a 5 p.m. press release confirmed the reporting. WE Charity would wind up its Canadian operations, sell off Toronto real estate worth millions and focus its efforts on international projects. Oh, and the Kielburger brothers who built the empire would walk away from the organization they co-founded 25 years ago. They talked it all out with CTV News.

The rise and fall of WE: In the latest issue of Maclean’s, four reporters traced the charity’s long arc, from its inspiring origin story in 1995 all the way to its tumultuous 2020. The 7,000-word longread starts with a young Craig Kielburger demanding a meeting with former prime minister Jean Chrétien and urging action on child poverty. Years later, the Kielburgers shared a stage with a beaming—and newly elected—Prime Minister Justin Trudeau. The WE story is, in part, a tale of two PMs.

The contrast between the two images is stark. In the former, a young boy rails against the vague assurances of one Canadian prime minister, demanding he back up his empathetic signals with action; in the latter, that boy-turned-seasoned-charity-mogul embraces the platitudes of another PM, seemingly secure in his belief that this is the best way to change the world.

Erin O’Toole presided over his first caucus meeting as Tory leader in the Sir John A. Macdonald Building across the street from Parliament Hill. O’Toole positioned his team as an “engaged, ethical and compassionate” government-in-waiting. The pool report sent to the Parliamentary Press Gallery noted the pandemic-era table accessories included a “very prominent container of Clorox wipes in front of O’Toole and a “Costco-sized vat of hand sanitizer” next to deputy leader Candice Bergen.

Public Safety Minister Bill Blair took one on the chin after a government-appointed panel that monitored Correctional Service Canada’s new “structured intervention units”—the replacements for a solitary confinement regime found unconstitutional by the courts—fell apart after its panellists received no usable data and saw their terms expire.

Blair might have thought the bad headlines would go away after he promised the data. But Justin Ling, who broke the news of the panel’s possible demise in Vice, writes in Maclean’s that Anthony Doob, the panel chair who’s not sure he’ll stick around, still has no data. The correctional service is in the midst of replacing outdated software that tracks every second of inmates’ lives. But Doob says old tech is no excuse. Maybe, he told Ling, they just don’t have the data.

“They do lots of research themselves using their old system to get data. And, as I’ve said many times, if they truly cannot get the data for the panel, that means that they don’t know what is happening, in a systematic way, in their institutions.”

In the shadows: A recently published poll commissioned by the Communications Security Establishment—Canada’s electronic spy agency—found that very few Canadians could name it without being prompted. The poll, conducted by Phoenix SPI at a cost of $84,978.57, asked respondents if they could name a federal agency charged with “intercepting and analyzing foreign communications and helping protect the government’s computer networks”—and 81 per cent couldn’t name one. Eleven per cent offered up the Canadian Security Intelligence Service. Just three per cent named CSE.

As the Liberals prepare their Throne Speech vision to “build back better,” economic policy wonks in various ministers’ offices will undoubtedly listen closely to Bank of Canada Governor Tiff Macklem’s speech today at 12:30 p.m. The new governor will speak virtually to the Canadian Chamber of Commerce about the “uneven effects of COVID-19 on different sectors and people in the economy.” Watch the speech here.

Liberals represent 40 rural ridings across Canada. That’s half the number held by the Tories, but still a little over one-quarter of all rural districts. That means the opinion of Kody Blois, the Nova Scotia MP who chairs the Liberal rural caucus, should hold at least some sway. In an op-ed Blois circulated on Throne Speech priorities, he took aim at stubborn interprovincial trade: “It should not be easier for wine producers in Nova Scotia’s Annapolis Valley to get a bottle of our signature Tidal Bay across the Atlantic Ocean than across a provincial border to another Canadian province,” writes Blois. “It’s 2020, and that needs to change.”

Every so often, a newly appointed judge’s biography shows a little life. So it was with Justice Ian Caldwell, recently named to the Supreme Court of British Columbia. Caldwell, who was most recently a judge in his hometown of New Westmister, B.C.,  lives on several acres of farmland in Chilliwack. He reveals ownership of two yorkies, a “variety of” cats and a “hopefully diminishing population of mice.” Caldwell plays guitar “passably” and sings “poorly.”