The year in Justin Trudeau's socks

Match the prime minister's weighty words to his whimsical footwear 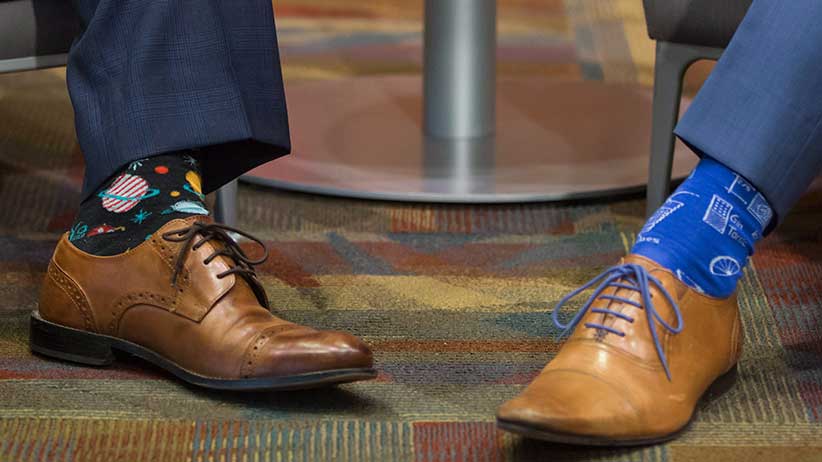 Prime Minister wasn’t the only one in fancy footwear at this recent meeting with another Canadian leader. (Darryl Dyck/CP)

What do you get the man who has everything—a country to run, a billionaire friend with an island to vacation on, and the cover of numerous international magazines? Socks, it turns out.

Prime Minister Justin Trudeau’s penchant for patterned and quirky footwear has made him an easy name to cross of the holiday gift lists of world leaders. Irish Taoiseach Leo Varadkar welcomed him to Dublin in July with a pair of green foot-protectors, and he got a set adorned with the faces of Kelly Ripa and Ryan Seacrest when he appeared on their show the month before.

Trudeau’s socks have been the object of both emulation and scorn since he took office. Opposition MPs have referenced them 10 times in the House of Commons, with Conservative Tom Kmiec satirically suggesting the appointment of a “minister for sock selection” in a debate over cabinet salaries and composition. Trudeau’s willingness to subvert the drab, grey stereotype of male political fashion has inspired other leaders to follow suit (those remain drab and grey for the most part, unfortunately). Varadkar wore Mounties and maple leafs to that July meeting, while British Columbia premier John Horgan recently pulled on some planets and stars for his sit down with the prime minister.

Socks have become a stand-in for personality in the modern male professional’s dress code. Gone are the greys and whites that filled your father’s brogues and oxfords, to be replaced with a range of patterns and colours out of a designer’s wildest trip. The Prime Minister is simply a dresser of his age.

Trudeau of course has a very serious job, so on some days when his footwear are whimsical, his words are weighty. (On truly solemn occasions, he does leave the silly socks at home). Try to match the prime minister’s quotes from key meetings and appearances this year with the socks he was wearing at the time.