This Liberal has 'heard enough' from Jody Wilson-Raybould

Politics Insider for March 15: The media missed the story in Iqaluit, budget speculation begins, and Singh puts the pieces in place for his House debut 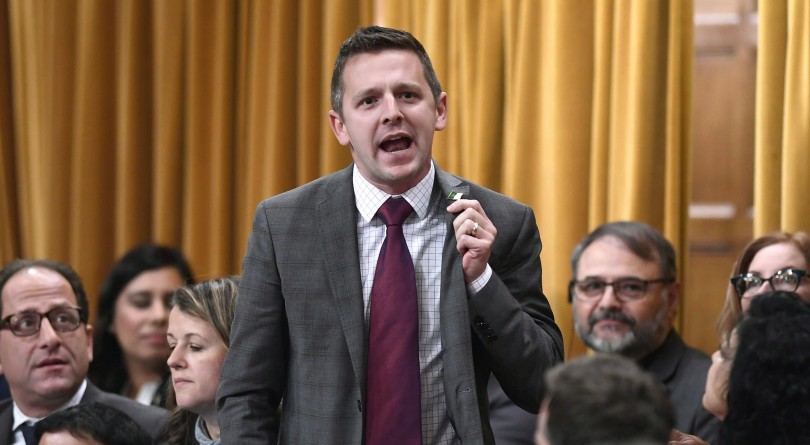 Liberal MP Francis Drouin rises during Question Period in the House of Commons on Parliament Hill in Ottawa on Monday, Nov. 19, 2018. THE CANADIAN PRESS/Justin Tang

Lost opportunity: After Prime Minister Justin Trudeau delivered his non-contrite contrition speech last week, where he was lambasted for not apologizing for his handling of the SNC-Lavalin controversy, Trudeau eventually made his way to Iqaluit where he did deliver an emotional apology—for the federal government’s mistreatment of Inuit with tuberculosis from the 1940s to 1960s. However the media who attended the apology focussed all their questions on SNC-Lavalin instead. It’s just one example of how reconciliation falls short, writes Natan Obed, president of Inuit Tapiriit Kanatami, the national Inuit representative organization:

It seems as if there has always been a more important story to tell than the stories of human rights violations against Inuit. In the case of the mistreatment of the tuberculosis epidemic, I can’t help but wonder how the lives of so many Inuit might have been different if the media had pursued with dogged determination the stories of infants torn from their mothers arms, mothers taken aboard ships without being able to say goodbye to their children, children sent back to the wrong community after treatment, the way they pursue the stories that dominate our headlines today. (Maclean’s)

Put it in a letter: The Liberal MP who led the move to shut down an emergency justice committee meeting before it could debate whether to re-invite Jody Wilson Raybould back to testify,  accused the opposition of playing politics with their cries of “cover-up”. Liberal MP Francis Drouin said Wilson-Raybould has had her chance to speak and if she has anything else to add, she can put it in a letter. “I think I’ve heard enough,” Drouin told CBC Radio in Ottawa. “Ms. Wilson-Raybould has said, in response to Elizabeth May and Nathan Cullen, that nothing illegal was committed, nothing criminal was committed. So now the conversation has to shift between whether or not the attorney general and the minister of justice, those roles should be split.” (CBC News)

Morneau gets a shoe-over: As per annual tradition for Canadian finance ministers, Bill Morneau unveiled the shoes he’ll wear when he delivers his pre-election budget on March 19. They’re actually the same pair he wore for budget 2016 but he had them resoled at an all female-owned shoe repair shop in Toronto. (City News)

And with the budget just days away, the leaks are starting to flow. At an event in Toronto, Morneau hinted at a skills-training programs. Sources later described the plan to the CBC as a “lifelong learning” account, modelled on a program in Singapore that creates personal accounts for those 25 and over which hold credits from the government that can be used to pay for retraining. (CBC News)

In addition to funding for job training, other initiatives are on the agenda, from a return to longer mortgage amortizations  to pharmacare to tax changes for seniors.  (Global News)

The other pipeline fight: Maclean’s reporter Kyle Edwards  takes an in-depth look at the struggle being waged between those Indigenous groups opposed to any and all pipelines through their territories, and other First Nations that see the construction of pipelines as a path to economic independence and a way to take their own control of environmental protection:

Not long ago, Stephen Buffalo, the president and CEO of the Indian Resource Council of Canada (IRC), held a conference called “Pipeline Gridlock” in Calgary to discuss the involvement of Indigenous people in natural resource projects. Invitations went out to its 174 First Nation members and prominent oil executives. The year was 2016. Enbridge’s Northern Gateway was months away from being killed and the Trans Mountain expansion was better known as TMX. Fort McMurray, Alta., had partly burned. At the time, Buffalo got word that environmental groups and the Idle No More movement would converge on the streets in protest; Greenpeace had sectioned off a part of the city. So Buffalo put off the conference until later that year. But he still remembers what was said about him: “sellout Indian.” “Earth killer.” (Maclean’s)

Singh style: The Toronto Star’s Susan Delacourt spotted NDP Leader Jagmeet Singh biking up to Parliament Hill and heading in for debate prep ahead of his first appearance in the House next week (Twitter)

On Thursday Singh shuffled the NDP critics roles as he manages the high-profile departures of several members of his party ahead of the next election. Saskatoon MP Sheri Benson became deputy leader, a position she’ll share with Quebec MP Alexandre Boulerice. Another Quebec MP, Ruth Ellen Brosseau was named party whip. Last month Brosseau said she was approached by the Liberals about running for them, but said “My door was never open and there were never serious discussions.” (iPolitics)