This week’s 338Canada projection: All bets are off

Philippe J. Fournier: The Conservatives' slide in Ontario proves costly in the overall seat projection—now a dead heat between the two main parties 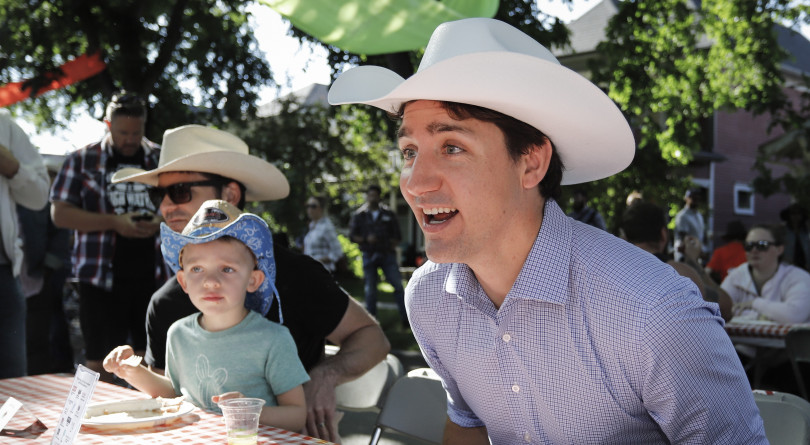 Fresh new data was published last week, and it should certainly concern Conservative strategists, as it appears that the Liberal slump from the SNC-Lavalin story and the CPC as the election-favourite narrative have all but vanished.

Two new national polls were published last week from Nanos and Mainstreet Research, as well as a local Forum Research poll for the city of Toronto. Here is a brief recap: 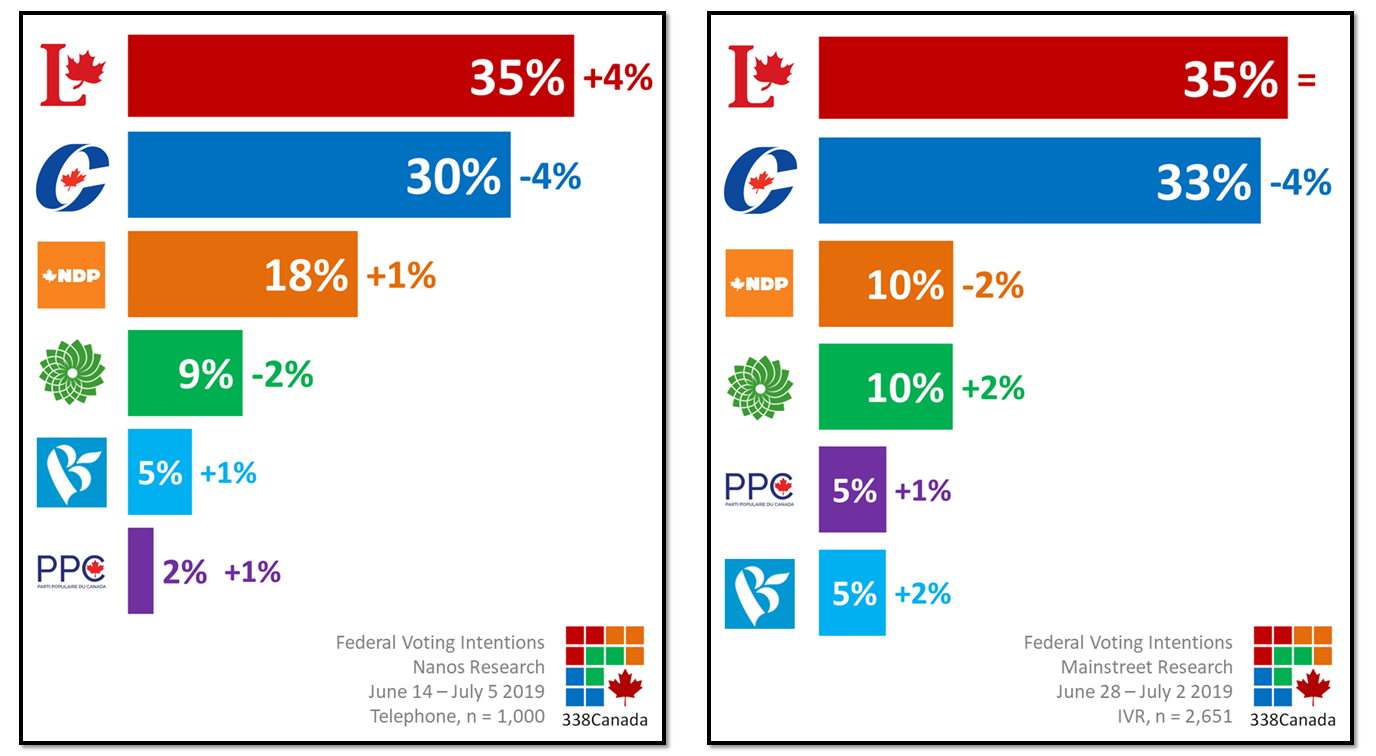 We add these latest polls in the 338Canada model, and present today this federal projection update.

The Conservatives and Liberals now stand about two points apart in the popular vote projection, with the Conservatives at an average of 34.6 per cent and the Liberals, 32.4 per cent. However, considering the margin of error of this projection, this result should be considered a statistical tie between the two parties, with a slight edge going towards the CPC. 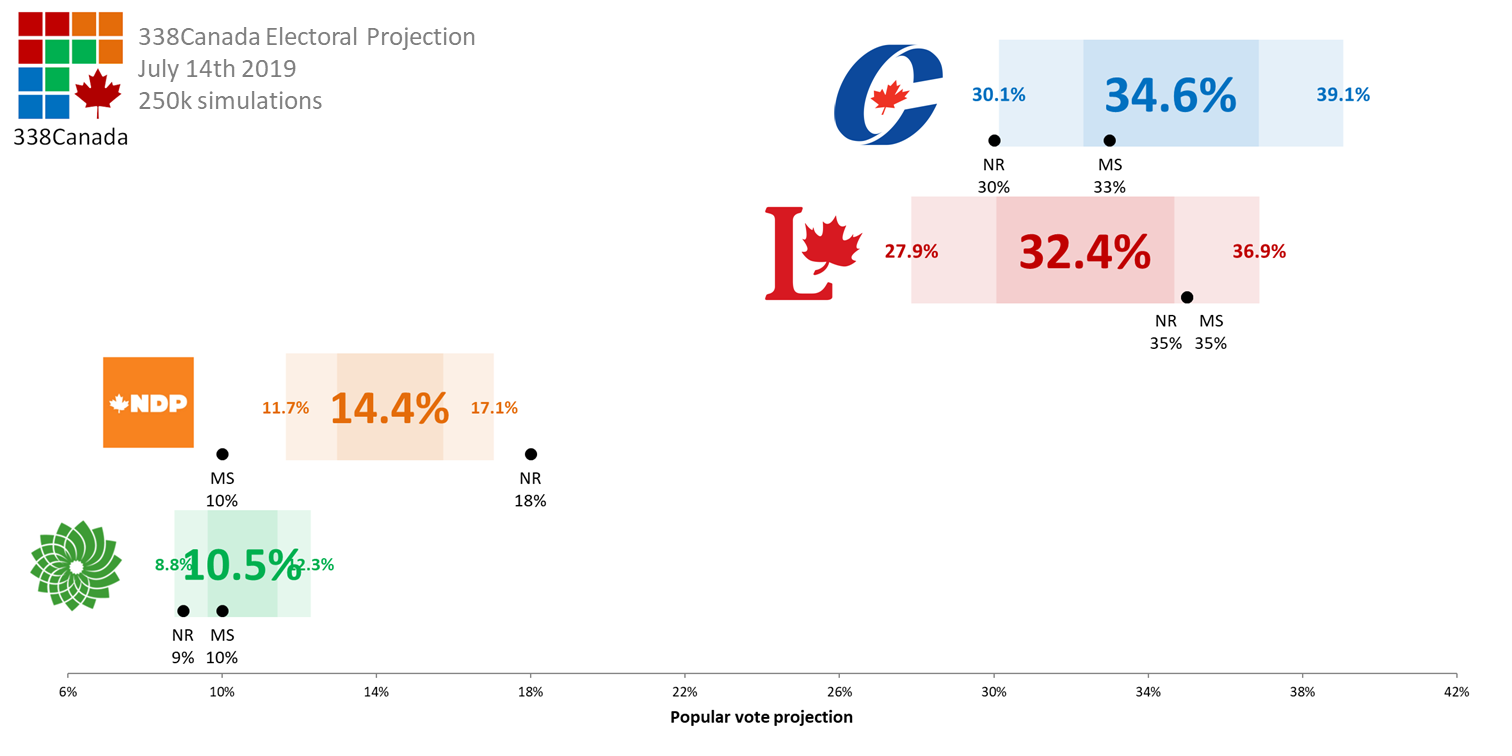 The NDP stands at an average of 14.4 per cent, but, as you can see from the graph above, the latest polls disagree on where the NDP stands nationally. The 338 projection falls almost right in the middle of last week’s diverging numbers.

The Green Party of Canada remains stable at 10.5 per cent. In Québec, the Bloc stands at an average of 19.3 per cent (4.5 per cent nationally).

Consequently, the seat projection this week is, quite literally, a dead heat between the two main parties: 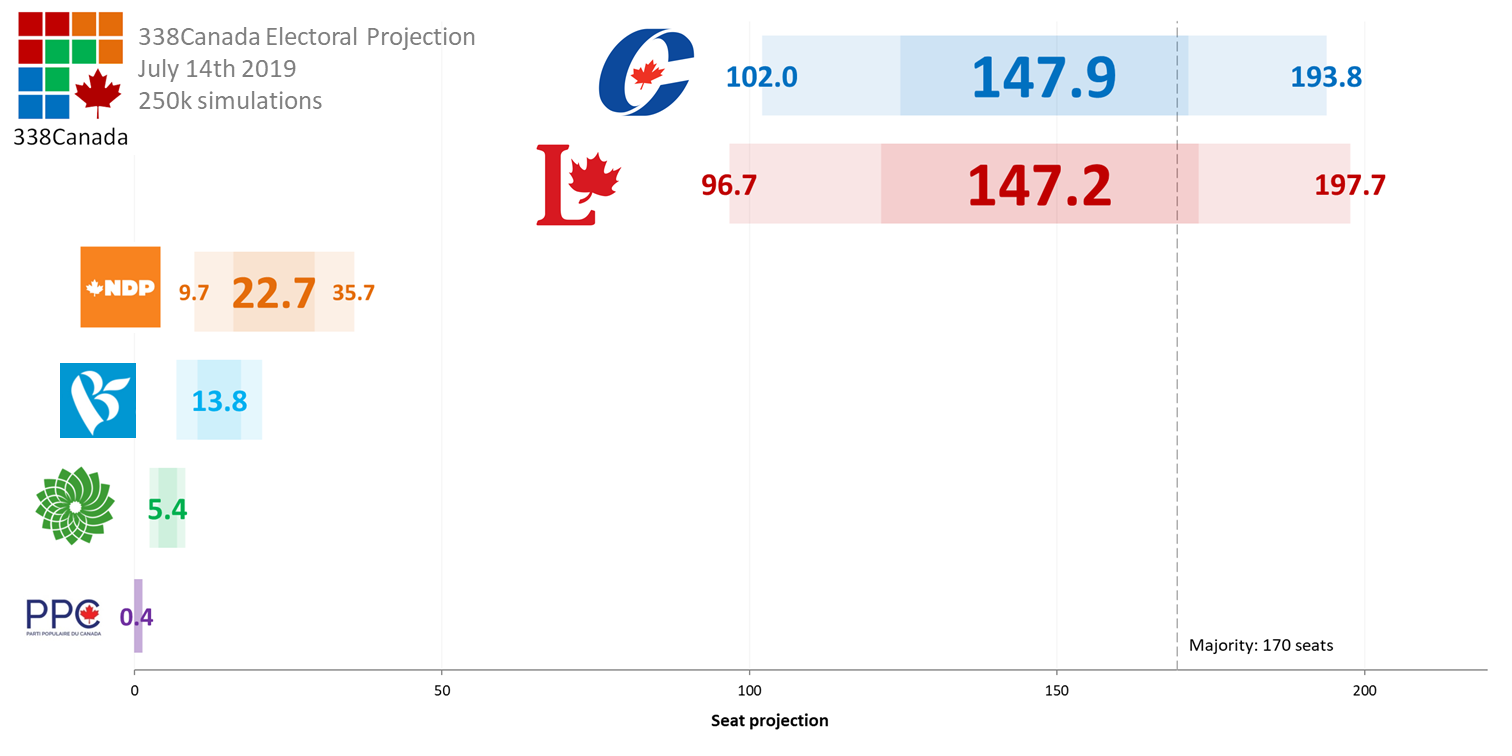 The Conservatives win an average of 148 seats and the Liberals, 147. Considering that the margin between the parties is significantly smaller than the projection’s uncertainty, we have—according to current data—a true toss-up.

The following graph is the seat projection probability density for the LPC and CPC: 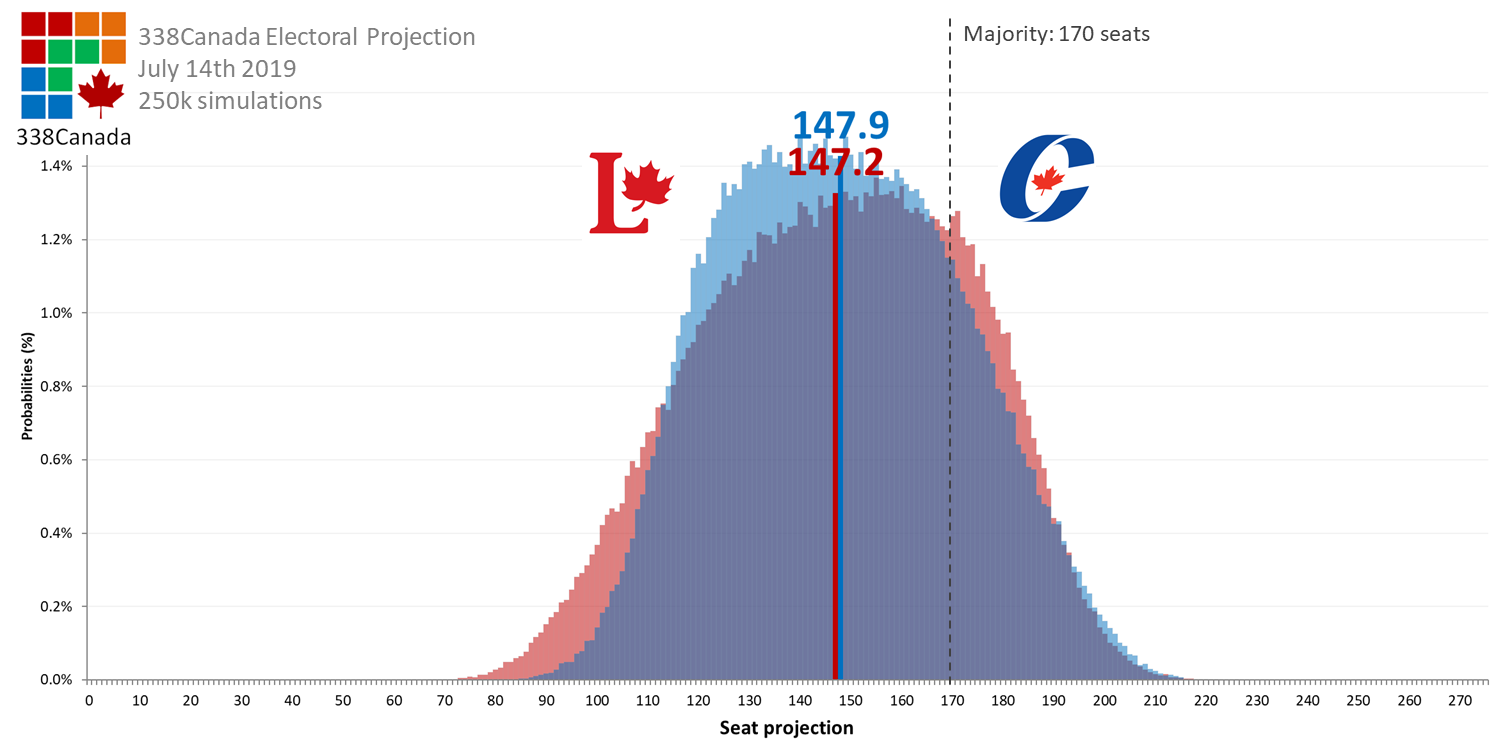 These two curves overlap almost perfectly. Needless to point out that the most likely scenario, with these numbers, would be a minority government—led by whichever party that would manage to win the confidence of the House of Commons.

Here is the probability density of the seat difference between Liberals and Conservatives: 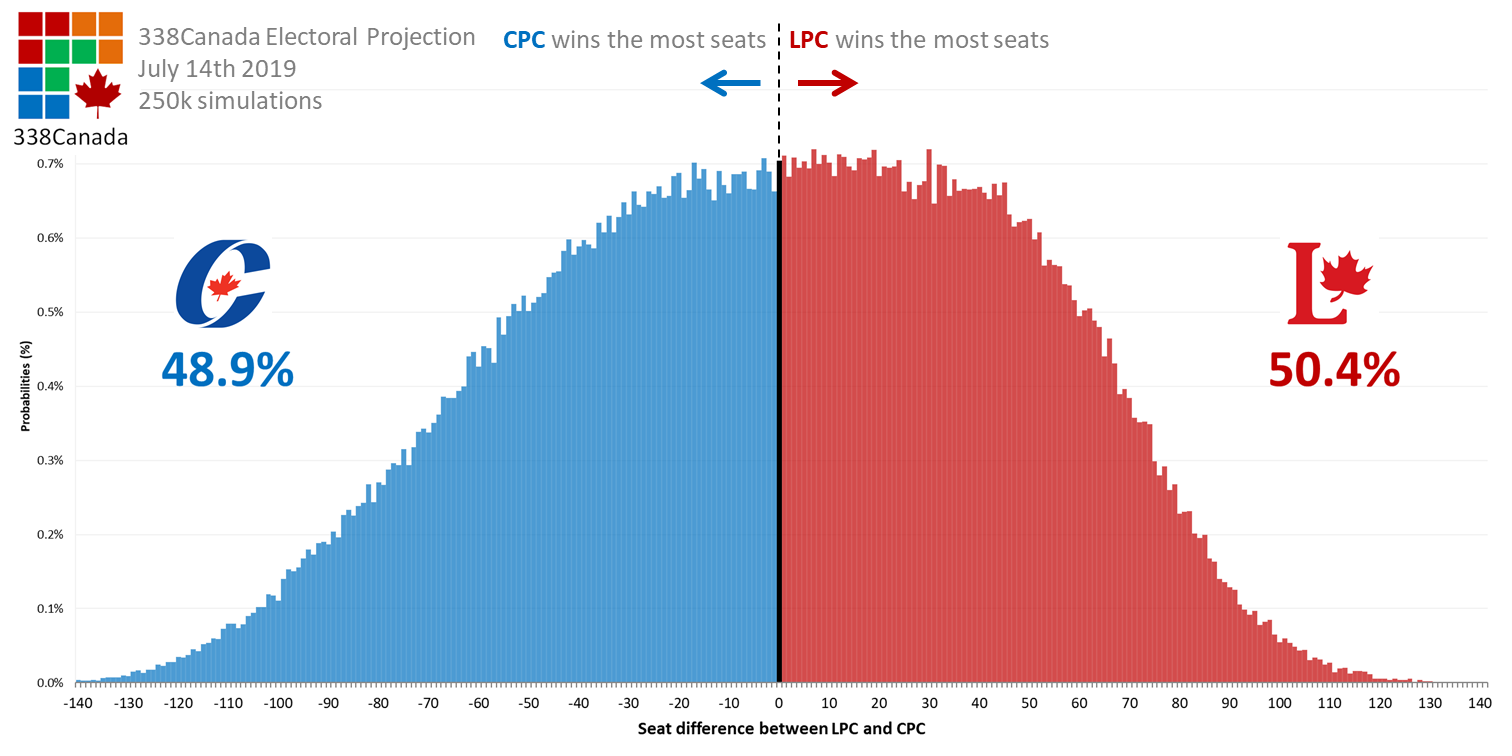 As we enter the middle of summer, Canadian pollsters will probably take a much-needed break before the fall campaign, and so unless a major and unforeseeable event should occur, we expect these numbers to remain mostly stable for the next few weeks. But then again, we never know.

Current Members of Parliament and candidates of all stripes for this fall will tirelessly tour their constituencies in the next month hoping to convince Canadians that they, and their respective team, are the best positioned/most qualified to lead Canada’s government for the next four years (or less).

Federal Conservatives will try to feed off the momentum from various provincial conservative parties of the past years. In 2015 when Justin Trudeau was elected Prime Minister, New Brunswick, P.E.I, Ontario, Quebec and British Columbia were all led by provincial Liberals. Alberta and Manitoba were led by NDP premiers. Since then the pendulum has swung the other way: as of this writing, all of these provinces except B.C. voted right wing or centre-right leaning parties to power.

And the Liberals? Unlike during the 2015 campaign, Trudeau and his team will have a record to defend, which is no easy task for incumbents of any party.

Has the figurative pendulum swung all the way just in time for Andrew Scheer? With today’s numbers in hand, we can only conclude that all bets are off.