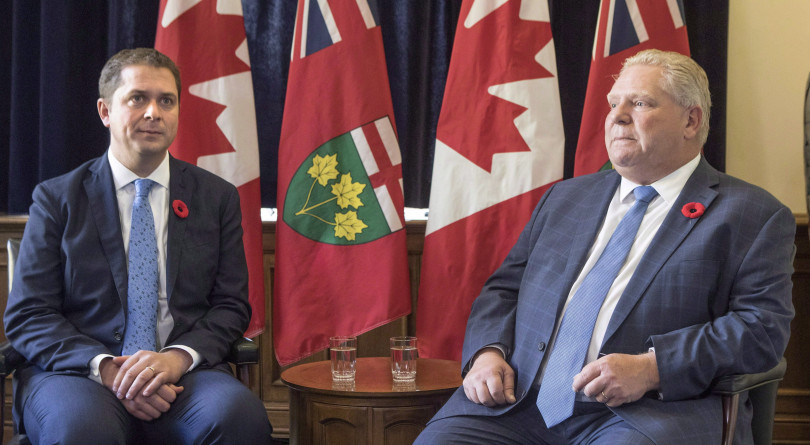 Ontario Premier Doug Ford meets with Scheer in the Queens Park Legislature in Toronto on Oct. 30, 2018 (THE CANADIAN PRESS/Chris Young)

With plenty of fresh new data published on Canadians’ voting intentions of late, it’s time to update the 338Canada federal projection. Here is a short recap of the last seven days:

We add these new numbers to the pile and present today this 338Canada federal projection update.

Unsurprisingly, the race is deadlocked on top of voting intentions between the Conservatives and Liberals. The Conservatives still hold a narrow average lead with 34.1 per cent. The Liberals keep climbing to reach 33.2 per cent. Considering the model’s uncertainty and variance of the latest polls, we must consider this result a statistical tie. 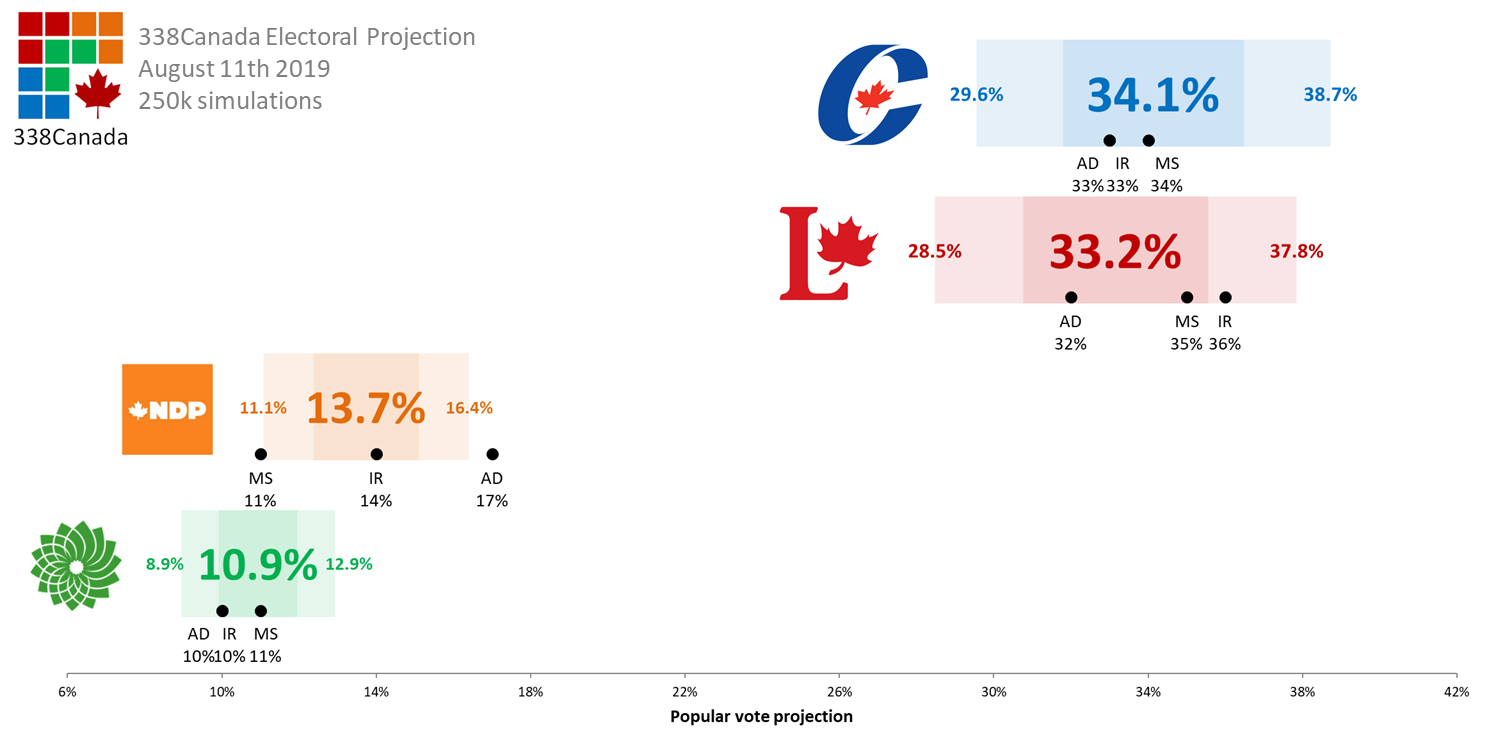 There is still significant disagreement on where the NDP stands nationally. Abacus has Jagmeet Singh’s party at 17 per cent, while Mainstreet measured its support at a meager 11 per cent. The NDP’s 338Canada average is currently 13.7 per cent.

The Greens’ average stands at 10.9 per cent. The Bloc québécois has the support of 18.9 per cent in Quebec (4.4 per cent nationally). Maxime Bernier’s PPC is at 2.9 per cent.

With so many projected close races throughout the country, there remains a high level of uncertainty in the seat projection. Nevertheless, the Liberals’ seat average climbs modestly to 155 seats, 15 seats short of a majority. 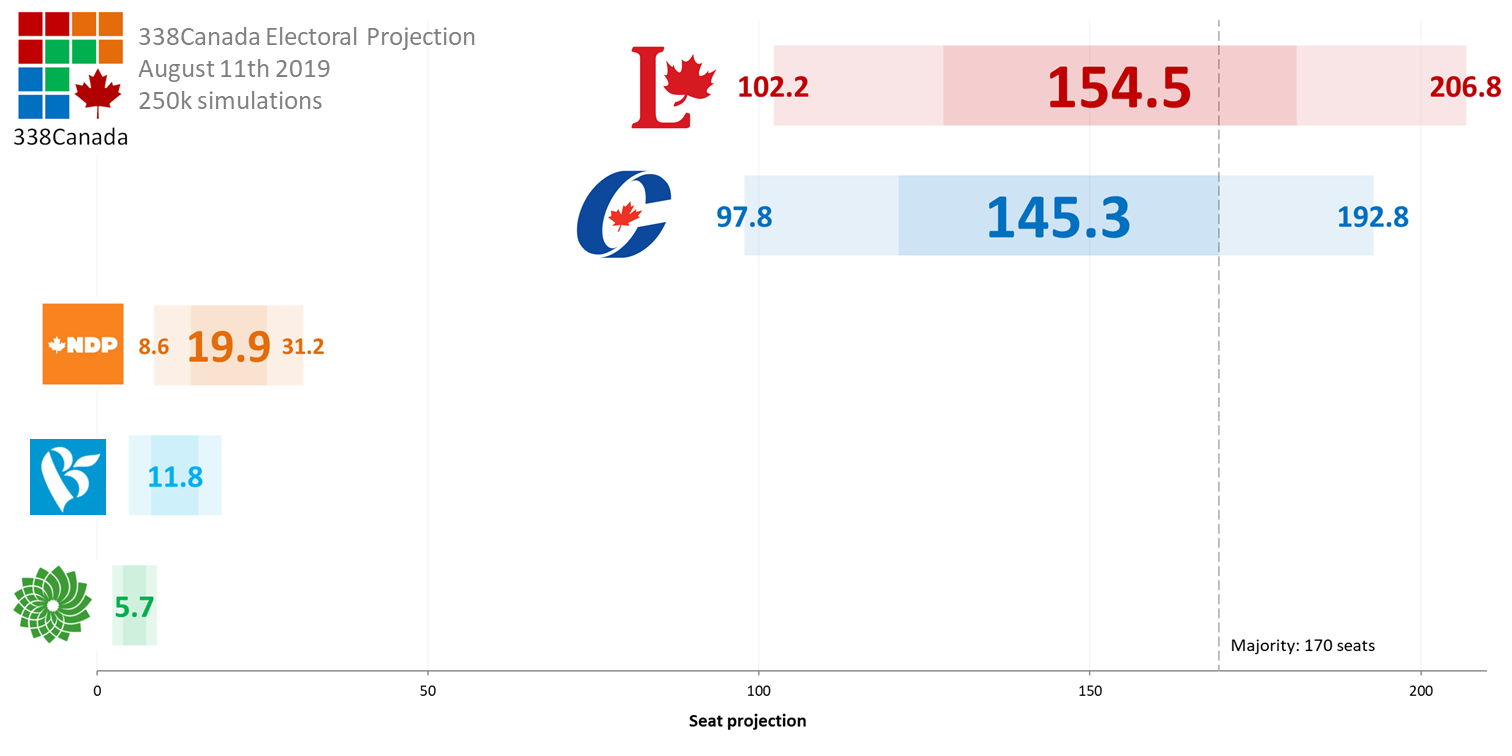 The Conservatives still hold many of the safest seats in the country: Alberta, Saskatchewan, the Quebec City region, and the rural regions of B.C., Manitoba and Ontario. However, as we will see below, their recent slide in Ontario may prove costly if not reversed come election day. The CPC’s projection average this week is 145 seats.

Nevertheless, the seat projections of the LPC and CPC still overlap significantly (see graph below), meaning a modest polling miss of 2 to 3 points either way could change the outcome dramatically: 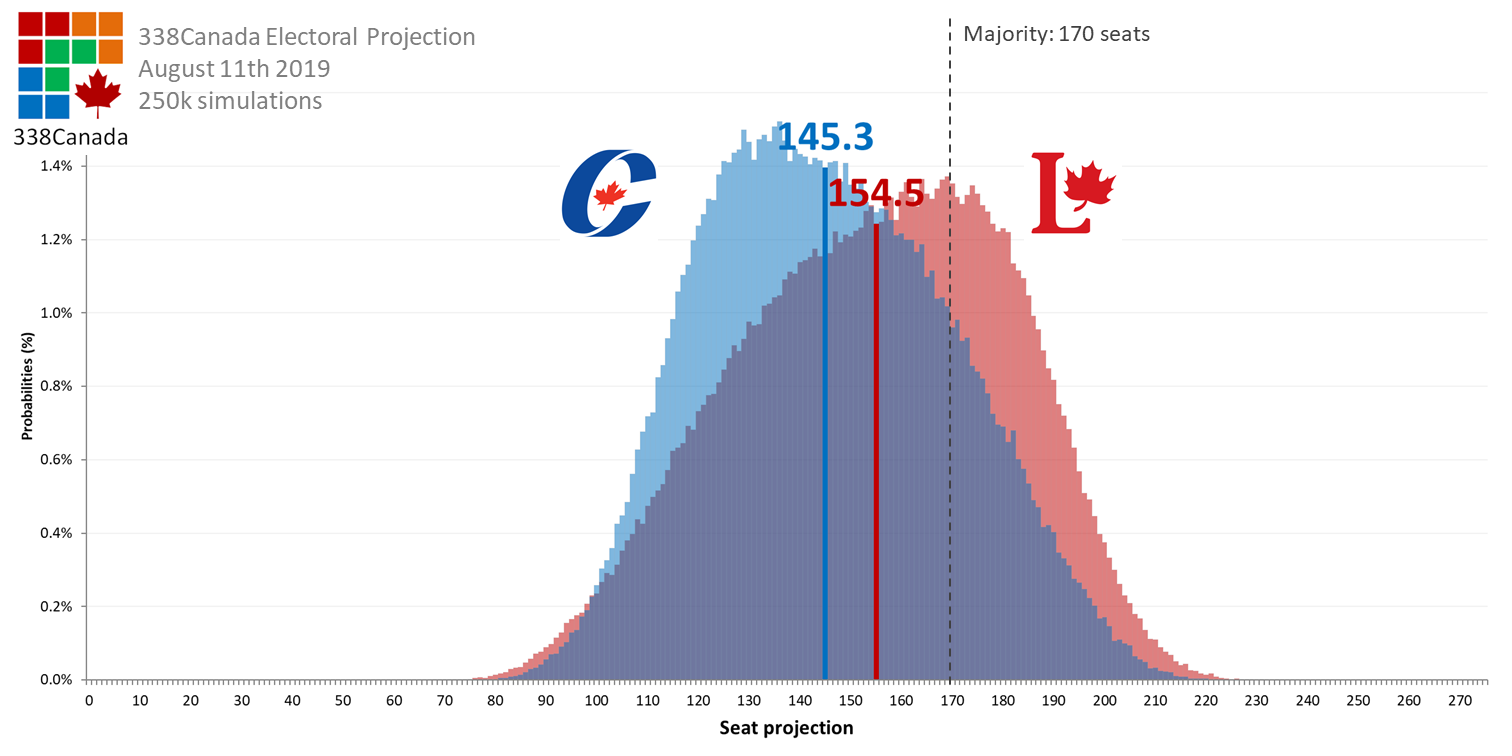 The NDP falls to an average of 20 seats, half of which are located in Ontario. In 2015, the NDP won 16 seats in Quebec—the most of any province. The NDP’s seat projection in Quebec is now down to only one (most likely Rosemont-La-Petite-Patrie).

The Bloc québécois is holding steady at an average of 12 seats in Quebec. The Bloc is competitive in several districts in the suburbs of Montreal, where many close Bloc-Liberal battles are currently projected.

Finally, the Green Party’s average stands just below 6 seats on average, almost all of which are located on Vancouver Island.

Not shown on the graph above are two candidates whose odds of winning their own districts are worth watching: 1) Vancouver Granville, where independent candidate Jody Wilson-Raybould runs for re-election, and 2) Beauce, where PPC leader Maxime Bernier tries to be the first elected MP under the PPC’s banner.

When compiling the model’s data, the Liberals win the most seats in 58 per cent of all 250,000 general election simulations, and have a 30 per cent chance of winning a majority of seats. 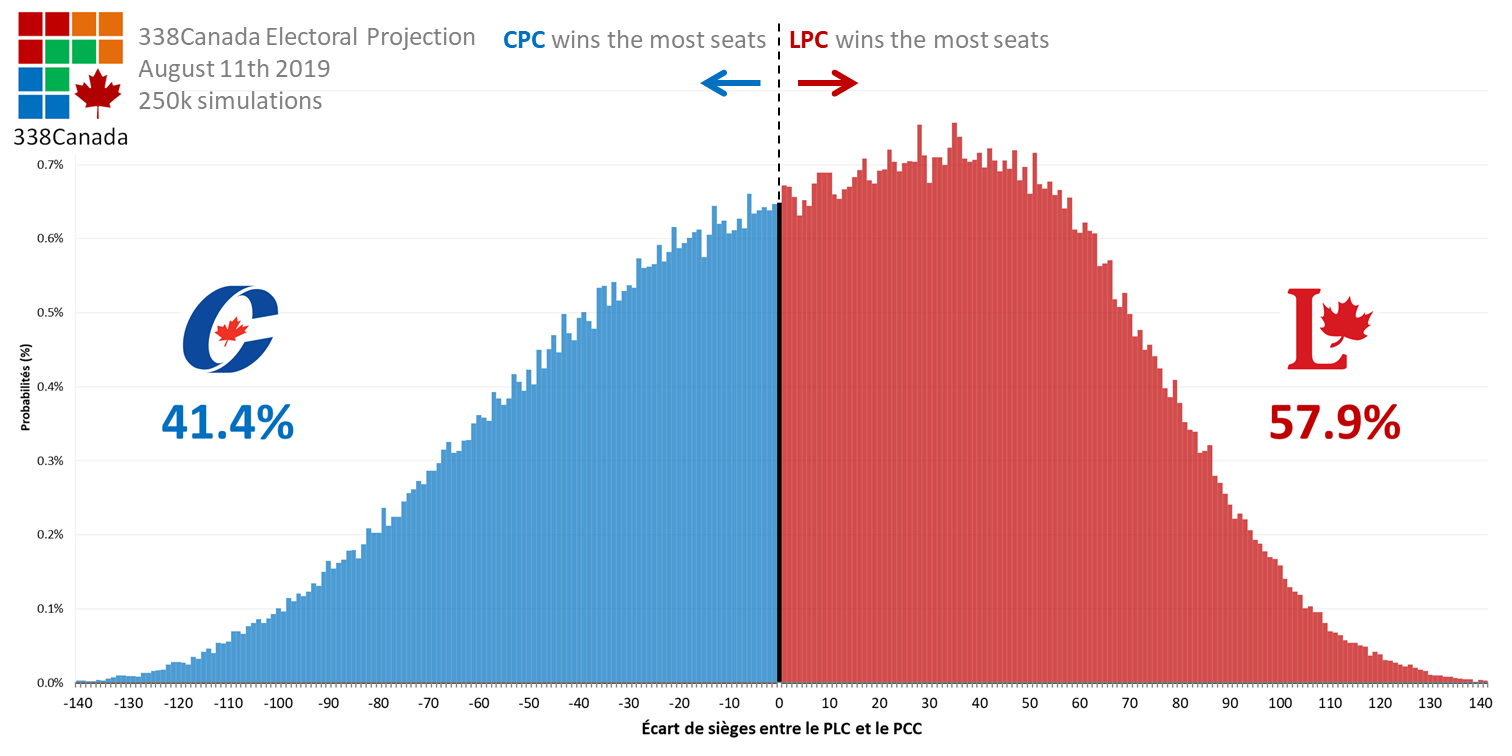 The Conservatives still win the most seats in 41 per cent of simulations, including 19 per cent odds of winning a majority.

Once again, considering the uncertainty and variance of current data, this election is still a coin flip.

Plenty has been written on the recent Conservative troubles in Ontario, but there has been some significant disagreement on the amplitude of those troubles for the CPC. Here are the latest projections and polls for Ontario: 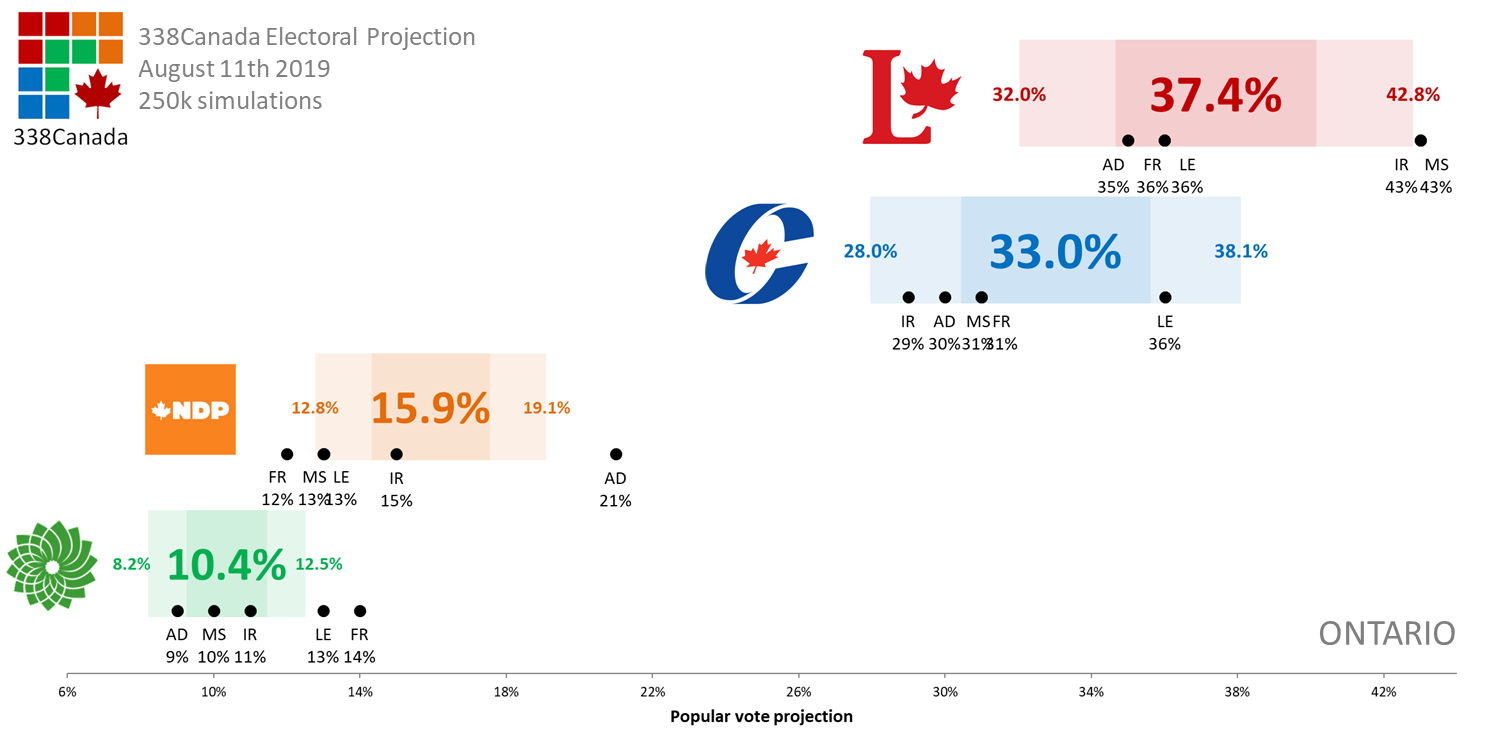 Léger was last on the field in late July and measured a tie at 36 per cent apiece for the LPC and CPC in Ontario. Forum Research, also in late July, had a five-point lead for the Liberals in the province—numbers similar to those of Abacus. Mainstreet and Innovative both have double digits leads for the Liberals—a major contrast with the other firms.

This polling discrepancy in Canada’s most populous province is partially to blame for this projection’s high uncertainty. It would be mathematically impossible for the Conservatives to win the election if they lose Ontario by 10 points or more, but Andrew Scheer could still pull off a minority victory even by losing Ontario by a handful of points—as did Stephen Harper in 2006.

However, the 2006 analogy stops there: The Bloc québécois won 51 Quebec seats in that election, effectively ending Paul Martin’s short tenure as Prime Minister. Winning Ontario and the Atlantic provinces alone are simply not enough to win power at the House of Commons.