Tom Mulcair’s path to power was the most traditional of the leaders. But those blue-chip credentials seem almost retro now. 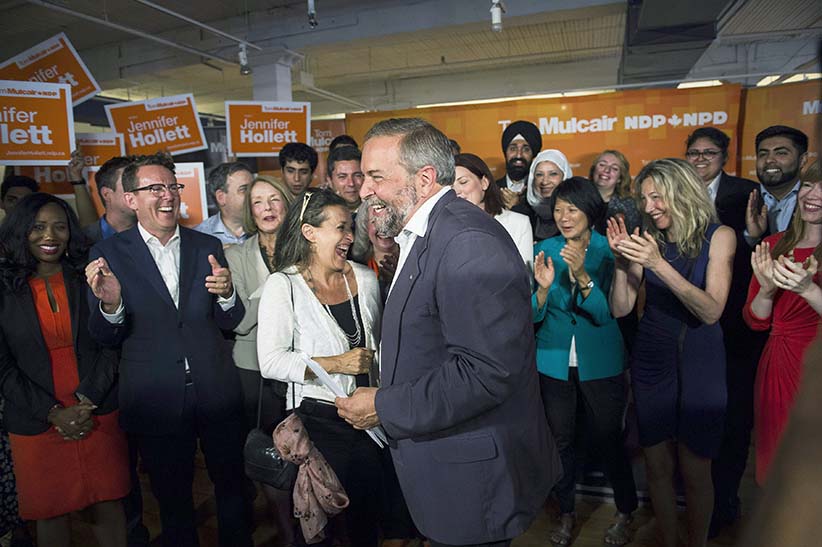 Canadian politics haven’t been kind in recent times to men with solid establishment credentials. Paul Martin epitomized the breed, with his impeccable Liberal pedigree, University of Toronto (U of T) law degree, and a stellar business career launched under the mentorship of none other than Paul Desmarais. But Martin’s prime-ministership was, of course, cut short by Stephen Harper, who had decamped for the wild West after fleeting exposure to the U of T’s incubator of elites, eventually to find his way upward along the decidedly un-established path of Reform politics and lobbying for the right-wing National Citizens Coalition.

For nearly a decade now, Harper has reigned over what’s left of the former establishment’s parade. But the sense that something in the Canadian power structure has changed runs deeper than his particular story. There’s been the economy’s westward shift, which, undoubtedly, diminishes the relative clout of the old Toronto-Montreal axis. There’s the underrated factor of political financing reform, begun under Jean Chrétien and continued by Harper, which has made it impossible for banks and law firms and other moneyed entities to essentially buy, as they used to do, an attentive hearing from Liberals and Tories alike.

For these and other reasons, today’s most interesting political figures tend not to have the once-indispensable backgrounds in big law firms, major corporations or the senior branches of government. Ontario Premier Kathleen Wynne, for instance, rose through local activism and school board politics. Naheed Nenshi, Calgary’s admired mayor, has some plush Harvard and McKinsey & Co. credentials, to be sure, but his pre-politics consulting career doesn’t much resemble the resumé of an old-school Canadian establishment type.

Even Justin Trudeau, who, by dint of his last name alone, rates, by some measures, as a pinnacle establishment figure, doesn’t conform to past norms. Before politics, as most Canadians know by now, he worked as a teacher. There was a time, it seems, when he aspired to a more predictable trajectory into the ranks of those who had always run things. In his autobiography, Common Ground, he writes of having dreamt as a teenager of entering McGill University’s law school straight out of CEGEP (Quebec’s distinctive junior college level), since that “was what the best and the brightest did.”

Related: What Justin Trudeau gained by losing his cool

Failing an experimental psychology course closed off the McGill law fast-track for Trudeau. But, as it happens, there is another federal party leader who went that prestigious, reliable route: Tom Mulcair was accepted, at age 18, right out of CEGEP. He became president of the McGill law students’ association. His first job after graduating was in the Quebec government’s justice department. He went on to hold a series of senior pubic administration jobs, then joined the Quebec Liberal party, where he became a cabinet minister. On the campaign trail now as federal NDP leader, he often mentions his 35 years of upwardly mobile experience and his stolid background in “responsible public administration.” He cites the influence of his mentor, the late Claude Ryan, who taught him the value of a rigorous management style.

Related: Mulcair is everyone’s target. Here’s how he plans to win.

These are not the credentials of an outsider. Early this year, when Mulcair shook up his staff in what turned out to be a successful bid to jolt the NDP out of a prolonged stretch in the polling doldrums, he brought in as his chief of staff Alain Gaul, who previously headed the financial restructuring and insolvency practice in Montreal for the national corporate law firm Davies Ward Phillips and Vineberg. This is the sort of guy Mulcair turns to—not your classic social-democrat rabble-rouser. Gaul had worked as Mulcair’s top aide back when he was Jean Charest’s environment minister in Quebec’s Liberal government.

All this is not to suggest, not for a moment, that Mulcair is some sort of blue-suited, corner-office-seeking stereotype. I’ve written before that his formative influences position him, intriguingly, in Quebec’s now-largely-vanished Catholic-left tradition. Throwing his lot in with the NDP in 2007, when the party was the furthest thing from a safe bet in Quebec, has to be seen as a move based mainly on conviction, not status-conscious ambition. Still, his education, his career, the mentors he’s emulated, the associates he relies on—all these look more like hallmarks of the establishment way than the parallel elements in the bios of Harper and Trudeau.

From the archives: The definitive portrait of Thomas Mulcair

And finally, there’s his mien on the campaign trail. Mulcair just comes off as a guy used to running the show, and by “show,” I mean big institutions with which he seems to feel entirely at ease. Harper has never presented himself that way, projecting ambivalence toward government without showing any sign of gravitating toward corporations. As for Trudeau, before taking over the Liberal party, he never held anything approaching a senior job in an identifiable institutional structure, so it’s impossible to situate him that way.

That leaves Mulcair as the nearest facsimile, among the major party leaders in this campaign, of the establishment figures we used to envision as the only possible prime ministers. That’s an odd thing for an NDP leader, although, arguably, an advantageous counterbalance to the party’s anti-establishment brand. The question now is whether those reassuringly retro qualities, which have helped to make Mulcair eminently plausible as a prime minister, might also subtly undermine his bid to be identified in the imaginations of voters—under prolonged scrutiny through this long campaign—with change.