Behind all the apparent inaction of late, there’s a plan to get re-elected 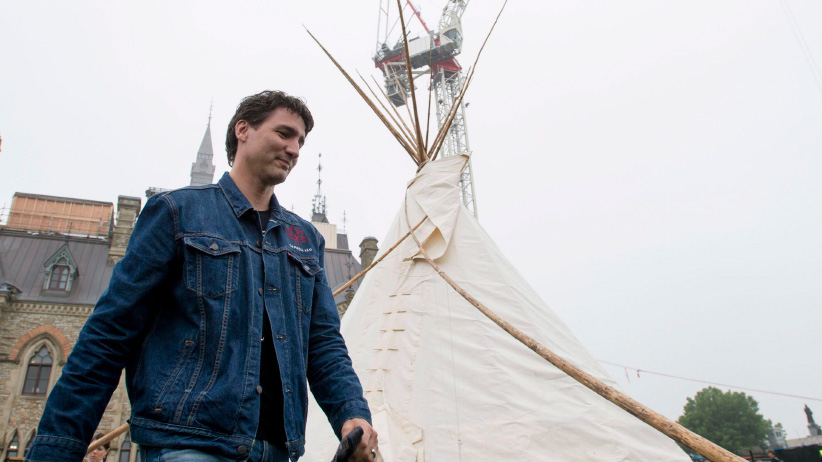 By June 27, Parliament was almost ready for a summer break. Justin Trudeau celebrated by holding a news conference. That’s one way to make the ensuing summer more pleasant by comparison.

“Let’s go back a bit,” he said to reporters. The Prime Minister had prepared remarks to read before taking questions. Prepared remarks constitute the message a government would send if it were saying only one thing. The rest of a news conference—the answers to questions—is mostly an attempt to avoid saying anything that might detract from the prepared remarks.

Trudeau said his government was elected with a mandate to “help the middle class and those working hard to join it.” That’s been at the centre of “each and every policy we’ve enacted.” That connection was easiest to make with the policies Trudeau listed ﬁrst, each dating from the immediate aftermath of the 2015 election and therefore now more than a year old. Income tax cuts for most people, combined with tax hikes on “the wealthiest one per cent.” An enhanced child beneﬁt for “nine out of 10 families.” An expanded Canada Pension Plan.

The changes he’s made since the beginning of 2017 are harder to connect to the Liberals’ middle-class mandate. Trudeau mentioned CETA, the trade deal with Europe, and a bill—tabled in the House but not yet passed into law—to “legalize and strictly regulate” access to marijuana. He listed a partial ban on oil tanker traffic along the northern coast of B.C., also the subject of a bill that’s been introduced but is still working its way through the system.

RELATED: What Trudeau says his government has achieved in 2017 so far, annotated

What else? “Important tax breaks for members of the Canadian Forces.” They won’t have to pay income tax when deployed overseas, whether their work is deemed risky or not. “New foreign and defence policies,” along with “our new feminist international assistance policy.” Ralph Goodale’s thorough and thoughtful overhaul to the Harper government’s national-security legislation, which has been introduced—stop me if you’ve heard this before—but is not yet law. Measures to “get serious about tackling” the opioid epidemic, including making it easier to open safe consumption sites. (That one is actually law.)

And finally, “concrete progress” on relations with Indigenous communities. This progress can be difficult to measure. Three days after Trudeau spoke, the executive director of the national inquiry into missing and murdered Indigenous women resigned. There are as many boil-water advisories today as there were when the Liberals took office.

“We know there’s more hard work ahead of us than there is behind us,” Trudeau said, perhaps understating matters.

With that, the floor opened for questions on promises broken (electoral reform) or not yet fulfilled (peacekeeping), along with the odd surprise (a 3.5-km sniper shot by a Canadian special-forces soldier in Iraq, which raised questions about Canadian soldiers’ mandate there). But he’d already sketched the central drama of his mandate with his opening remarks.

Note the division in that little homily between the early, big decisions that moved billions of dollars around quickly and the later decisions that were more reactive, on files that are both harder to budge and harder to connect to quite as many ordinary lives.

If Trudeau’s government manages to fritter away the goodwill that attended his election in 2015, it’ll be because he got lost in the weeds of too many decisions that were too far removed from his declared middle-class mandate. If he can hang on to that goodwill, it’ll be because the early decisions paid off, even if they took a while to do so.

Trudeau is clearly aware that the earliest moves, on income tax cuts, pension reform and, especially, on the child benefit, will go far toward making his case for re-election if unforeseen surprises don’t break it.

“When we put more money every month in the pockets of the middle class, yes, it makes a difference in the immediate,” he said. “But it creates opportunities for young kids who are lifting out of poverty to have better outcomes at school and eventually succeed more in the workforce.” Okay, that argument hints at a timeline rather longer than the next election. But Trudeau’s finance minister, Bill Morneau, has made similar arguments: that the efforts to move more disposable income into more Canadians’ pockets are only starting to affect the broader economy.

The same is true for Trudeau’s attempts to attract foreign investment, notably through the new Canada Infrastructure Bank, to help bankroll big new investments in roads, rail ports and so on. It will take most of the next two years for these efforts to even begin to bear fruit. “We understand that a lot of what we are investing in for communities, for Canadians, is going to take a while,” he said.

Trudeau took a similarly long view on one of the biggest problem files on his desk, the sputtering reconciliation with Indigenous Canadians. “It took hundreds of years to get here. It’s going to take many, many generations to end this legacy, but we are going to do it thoughtfully every step of the way.”

This long-view stuff can, depending on your mood or the moment, look like so many excuses. Trudeau made campaign promises, not for many generations, but for this four-year mandate, and in a lot of ways it isn’t going great. It’s taking him many generations to do things his predecessors didn’t find difficult. Appoint an officer of Parliament, for instance, really any officer of Parliament—an ethics commissioner, a commissioner of official languages. On its worst days, this government seems to seize up like the Tin Man in Oz.

Still, it’s true that early decisions can take some time to tell. One of Trudeau’s predecessors—in fact the first, Sir John A. Macdonald, was called “Old Tomorrow” for his wariness about quick decisions. And he lasted just about forever. Another of Trudeau’s forebears, Paul Martin, was called “Mr. Dithers” for similar instincts. There aren’t a lot of guarantees in this game.